Revolver Tseliski system: the most powerful in its class

October 28 2013
52
In the second half of the XX century, the most powerful in the world was the American hunting revolver “Casull”, which was created in the distant 1959 year. The energy of the bullet of this revolver was 1923 joule. And he would remain a record holder of the 20th century if the Austrian gunsmith Adolf Celiska (Zeliska) in 1995 did not surpass this result. Celiska began experimenting with hanging powder for rifle caliber cartridges. 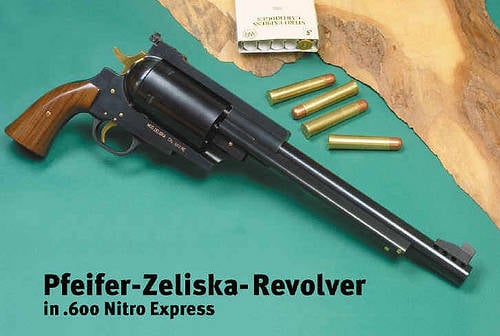 To increase power weapons, the designer actively experimented with charges. He managed to achieve an increase in the initial speed of the bullet to 614 meters per second, increasing the muzzle energy to 2809 joules. This result was achieved through the use of .30 caliber cartridges with an 14,9-gram shell bullet and a mass of powder charge equal to 2,59 gram. At a distance of about 12 meters, a bullet pierced a 8-millimeter steel plate. Celiski was not completely satisfied with this result, so he began experimenting with the revolver from Century Arms, the 100 model. This revolver was adapted under the .45-70 gun cartridge, and its weight was about 3 kilograms. For him, Adolph Celiska prepared cartridges with a Hercules 2400 charge in 2,72 grams (42 grains) and a bullet weighing 19,44 grams (300 gran) of the “High Power” type.

The Austrian master was also not satisfied with the result and began to create a weapon that no one had done before him - a revolver chambered for “Winchester magnum” in .458 caliber with a half-shell bullet 33 gram and 4335 muzzle energy Adolf Celiska met the technologist Otto Zieler and the owner of the company K. Pfeiffer Special Arms "by Klaus Pfeifer, who were initially skeptical about the idea of ​​releasing cartridges and revolvers with such a powerful caliber. Despite this, the customer managed to convince them, citing the revolver by the American firm “Sturm, Ruger and K” of the “Super Redhok” model as an example. For the development of the revolver, Tseliski spent 2 of the year, and as a result, they created an instance that was easily tested at the Vienna Station. The resulting revolver became a real monster - weight over 5 kilograms, length 47 centimeters with a length of stem 26 centimeters. However, the index of muzzle energy is not the limit. Hand cartridges with an expressive head void mass 19,5 gram muzzle energy is 5116 joules.

For comparison: a bullet fired from a Makarov pistol gives muzzle energy 300 joules. 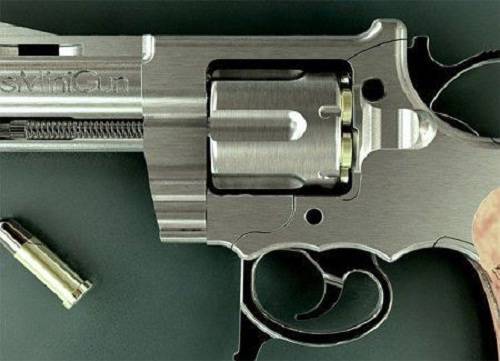 The revolver is made of special burnished steel. Below, on the right side of the frame, it says in gold “Special production for Adolf Celiski” in German. On the left side there is an inscription "MODEL .458 ZELISKA". In terms of Swiss francs, the weapon cost the owner 18 thousand francs.

The revolver's handle extending downwards is made of polished walnut. The width of the whole frame of the revolver is 24 mm, and the thickened walls of the drum - 7,5 mm. The drum length 85,5 mm and diameter 63 mm is equipped with five chambers. USM hammer type with open trigger single action. The trigger is placed in a capacious round bracket, which makes it possible to shoot with a glove. The trigger is equipped with a safety platoon. The revolver "Tseliska" has an integrated compensator, which is made in the form of two holes, extending 30 millimeters from the muzzle at an angle 45 degrees. In addition, the barrel has 6 rifling. However, the recoil of the revolver is about 42,7 joules, which, even despite the compensator and a significant mass, the revolver throws up to 40-50 degrees. Of course, not everyone will dare to shoot from this revolver, but those who decided to take this step describe the shooting as an unforgettable adventure.

To remove the spent cartridges and charge the revolver, the drum must be tilted to the left. From the drum the removal of spent cartridges is carried out simultaneously by hand using a spring-loaded extractor and a stem-ejector. The drum latch is located behind the drum flap on the left side of the frame. Sights open type - adjustable rear sight and front sight. In the muzzle of the trunk at the top there is a beveled back front sight, and at the bottom there is a slat-case for a rod-ejector. Micrometer screw allows you to move the sights. The revision line of the revolver is 350 millimeters.

The company that launched this giant later produced a revolver with a longer barrel and even more muzzle energy.

The Tseliski system revolver is quite interesting, but its purpose is not entirely clear. It could be used for hunting, as a “last chance” weapon - to finish off wounded large animals that attack a hunter, but the mass of a revolver does not allow carrying it as an additional weapon.

The use of this revolver for self-defense is also questionable, since for a shot from the Tseliski revolver it is necessary to strain the muscles of the back and arms. Recoil is quite painful and sensitive. Quickly open fire, too, will not work. And the price of such a revolver is very high.

But lovers of rifle exotic buy it. The revolver of the Tseliski system is now considered to be the most powerful revolver in the world. To make this revolver simply out of the reach of competitors, developers and designers are working on the use of cartridges .460 "uzerbi" or .50 "browning".

Ctrl Enter
Noticed oshЫbku Highlight text and press. Ctrl + Enter
We are
Magnum .44, Clint Eastwood and other bigRussian revolvers
52 comments
Information
Dear reader, to leave comments on the publication, you must to register.