"Dry" lifted into the air the fifth fighter 5-th generation, built in Komsomolsk - on - Amur 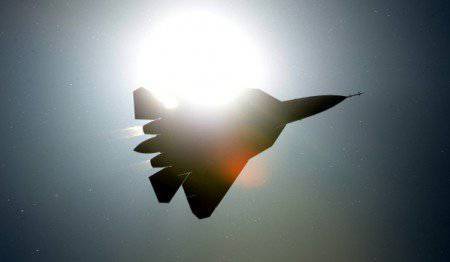 "This morning, the fifth prototype of a promising fighter aircraft was lifted from the runway of the factory airfield to the air," a representative of the Interfax company said.

According to him, during a recent working visit to Komsomolsk-on-Amur, this car was inspected at the enterprise by Prime Minister Dmitry Medvedev.

- Medvedev: “Creating an aircraft manufacturing center in the Russian Federation is a matter of paramount importance”

At the MAKS-2013 air show in Zhukovsky near Moscow, where viewers could watch the performance of complex aerobatics on the latest fighter, Commander-in-Chief of the Russian Air Force, Lieutenant-General Viktor Bondarev said that the PAK FA will be supplied to the Air Force from 2017 onwards.

Bondarev added that at the end of this year, the fighter will go to the Air Force for testing, while all flight tests have already been conducted on its weapon systems.

The first crash of the first prototype of the 5 fighter generation took place on January 29 2010 in Komsomolsk-on-Amur. The previous prototype fighter made the first 12 flight of December 2012 of the year.

Compared with the fighters of previous generations, the PAK FA has a number of unique features, combining the functions of a strike aircraft and a fighter.

The use of composite materials and innovative technologies, the aerodynamic layout of the aircraft, measures to reduce engine visibility provide an unprecedentedly low level of radar, optical and infrared visibility. This makes it possible to significantly increase combat effectiveness in work both on air and ground targets, at any time of the day, in simple and complex meteorological conditions.

Ctrl Enter
Noticed oshЫbku Highlight text and press. Ctrl + Enter
We are
Hopes for the anniversary MAKSMedia: Putin vainly admired the T-50 fighter - he was shown the plane with the old stuffing
Military Reviewin Yandex News
Military Reviewin Google News
54 comments
Information
Dear reader, to leave comments on the publication, you must to register.