Rasmussen was told not to cooperate with the CSTO

October 28 2013
38
Last week, it was reported that the NATO Secretary General once again declared that the alliance he headed was not ready to cooperate with the Collective Security Treaty Organization (CSTO), which currently includes Armenia, Belarus, Kazakhstan, Kyrgyzstan and Tajikistan.


Although, by and large, the term “headed” as applied to Mr. Rasmussen, used above, is far from the best. Why? Yes, if only because it was Anders Fogh Rasmussen himself who a couple of years ago expressed the idea of ​​the need to start cooperation between NATO and the CSTO. Then this idea, let's say, was stabbed by representatives of the American administration headed by Mrs. Clinton, who, as is well known, repeatedly stated that her goal (among other things) sees preventing Russia from creating any capable associations and blocks in the post-Soviet space. And as soon as information about the idea of ​​Rasmussen reached Washington, he was told in an epistolary form that possible cooperation between NATO and the CSTO could create only additional advertising for the CSTO, which, quote: "is contrary to the interests of the United States." Where did such information come from? Yes, all through the same acclaimed site WikiLeaks, which took and posted in the format of public access this interesting correspondence.

In this regard, it is at least ridiculous to call Mr. Rasmussen the Secretary General of the North Atlantic Alliance, which WikiLeaks demonstrated to the whole world. After that, someone else wonders: why are they "out there" so dislike Jullian Assange ... There are, of course, motives. With the publication of letters on hypothetical cooperation between NATO and the CSTO - as one example. 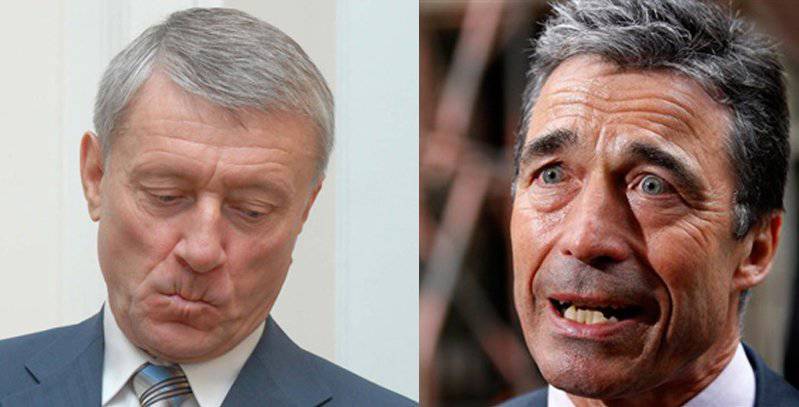 The most interesting thing is that the CSTO leadership, it seems, does not burn with a special desire to “be friends with families” with NATO, and Rasmussen is still forced (a priori) to refuse ... If someone really wants to be friends, then there are others formats ... CSTO Secretary General Nikolai Bordyuzha states about the relations of the CSTO and the North Atlantic Alliance:

For us, interaction with NATO is not a vital issue. We offer this cooperation only in order to increase the effectiveness of the activities of both NATO and the CSTO by joint actions. In any case, in Afghanistan, God himself ordered NATO to interact with such structures as the CSTO. It’s just focused, among other things, on preserving the life of people. I’m not even talking about ensuring stability in states. We have quite big plans for the development of the organization, and we are implementing them today. Therefore, when NATO is ripe for our cooperation, then we will consider the possibility of such cooperation. So far, unfortunately, this is not.

Indeed, NATO has not matured for cooperation yet. But is it NATO? It is unlikely that the entire alliance has matured, that is, 28 of the states within it. The United States has not matured, the UK has not matured. You see, they are afraid to create a CSTO advertisement ... Well, so let them be afraid further ...

On the other hand, and for what purpose in general these two organizations can hypothetically begin their cooperation? If the goal of the CSTO, as at least follows from the statements of representatives of the leadership of this organization, is to build a regional security system, then this is certainly not compatible with the goals of NATO. For NATO's goals for the entire 64-year-old history Alliance has nothing to do with the construction of any security at all. NATO is a typical American-British creation, which is designed to create a background when solving certain military issues. In recent years, these issues have increasingly been linked to chaos sowing literally around the world: from the bombing of Serbian cities to the actual sponsorship of al-Qaida in Syria. Do you really need to cooperate with the military bloc, which, during its existence, hiding behind a screen from the spread of pseudo-democracy, was chosen closer to the new (external) sources of support for the main economies of the alliance? The question is rhetorical.

Even if we assume that Brussels (after consulting with Big Brother, of course), says that NATO is ready to cooperate with the CSTO, then what will change? Maybe the CSTO leadership will begin to consult, whether to continue Washington or London to finance Syrian militants or to refuse funding? Maybe they will decide to help the CSTO to strengthen the southern borders of the CIS after the withdrawal of the combined contingent from Afghanistan? Well, it is hard to believe this ...

But NATO will try to do everything to spread the Afghan confusion a little to the north - to the republics of Central Asia, to the southern "underbelly" of Russia, much more hard to believe ... And then, as you know, the alliance doesn’t need to invent anything - just leave Afghanistan Arming his "army" and "police", leave the unused b / y weapon “As a gift,” for example, to Uzbekistan (which is still being talked about today in Washington and Tashkent), and then the Taliban will finish the job ... Remaining within the framework of Afghanistan only, as 90's practice has shown - the beginning of 2000, the Taliban do not want - they need space. And with the remaining NATO weapons, and even with the presence in Central Asia of the “opposition” fueled by American means, the spread of extremism in the region can go at an extravagant pace. Unless, of course, for such an alignment of the CSTO (all the states that are members of this organization) will prepare in advance.

Apparently, the CSTO is preparing and is actively preparing: operational and tactical exercises with the anti-drug sight “Thunder-13” on the territory of Kyrgyzstan, tactical and special exercises “Cobalt-2013” by the CSTO RRF in the Rostov Region, exercises in Chebarkul “The Indestructible Brotherhood-XNUM” »Involving fighters of elite special forces units, agreements on assistance to the Border Troops of Tajikistan.

So it is hardly advisable to talk about the need to create some kind of connection with the atlantists. Itself is more expensive. And so that there is no desire to impose cooperation on the alliance, the business card of NATO’s “cooperation” and NATO’s “aid” should always remain before your eyes: a collage of bombers over Belgrade, Tripoli, Baghdad, opium plantations of Afghanistan, tens of thousands of mutilated bodies and hiding behind the banner of Islam radicals scouring the roads of the Middle East in search of new blood.

Ctrl Enter
Noticed oshЫbku Highlight text and press. Ctrl + Enter
We are
Situational analysis of the death of the MH17 flight (Malaysian Boeing 777), made on the basis of engineering analysis from 15.08.2014Caucasian affairs
38 comments
Information
Dear reader, to leave comments on the publication, you must to register.