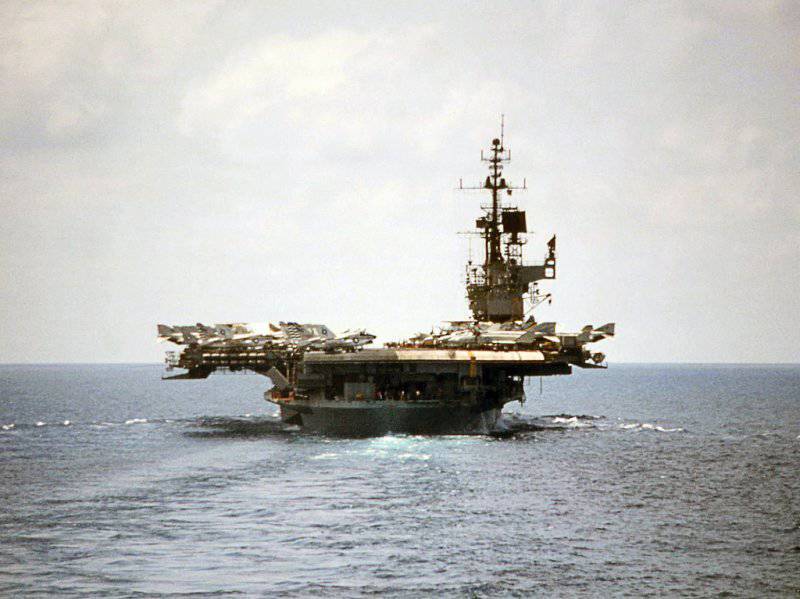 It must be said that by 1982 the Pacific Fleet intelligence had the text of a new US naval strategy. It was obtained by our scouts from a reconnaissance ship that conducted reconnaissance in the San Diego area off the west coast of the United States. I personally translated this text. But until the end, we have not yet realized its whole essence. There was a lack of other additional data on the capabilities of Tomahok cruise missiles and the use of aircraft carrier aviation in the new conditions, the role and place of multipurpose nuclear submarines equipped with Tomahok cruise missiles, and other information.

In addition, the confrontation between Pacific Fleet and Pacific Intelligence fleet The USA has reached its climax. The main objects of the Pacific Fleet intelligence are American aircraft carriers. If during the day we did not have data on the whereabouts of aircraft carriers in the western part of the Pacific Ocean, then this was a disaster. Increased readiness was announced to all parts of coastal radio reconnaissance, all reconnaissance ships located at sea were notified, readiness for the TU-95 RC reconnaissance planes was increased, the reconnaissance command post was put on high alert.

At the same time, the US Pacific Fleet took measures to ensure the covert deployment of its carrier strike groups from San Diego to the western part of the Pacific Ocean. Then it was thought that stealth is the main condition for the suddenness of the first preemptive strike.

Recall 1941 year. What is this manifested. First of all: the shutdown of the radar stations of the ships during the flight of the Soviet reconnaissance satellites of the Legend system. Use for communication with ships only VHF range. Changing the routes of AUG deployment to the western part of the Pacific Ocean (the standard route along a large circle arc), and the southern or northern routes were chosen. The introduction of radio silence modes. Disinformation in the media and other methods of disguise and disguise.

So, September 11, 1982, Saturday. Our Pacific Fleet has just completed its final annual exercise. All ships returned to base. Worked out the tasks to combat enemy carrier strike formations near our coast, to ensure the release of our SSBNs from base into combat service, the landing of troops, the defense of the coast, etc.

The actual situation in the zone of the fleet. The latest intelligence of the Pacific Fleet. The carrier-based strike group led by the nuclear aircraft carrier Enterprise, having made the transition from San Diego to Pearl Harbor and after refueling the escort ships, began to evolve in a northwesterly direction towards Kamchatka (which is unusual at all, but it did not pay much attention ). Data on AUG is confirmed by space, coastal radio reconnaissance and our reconnaissance ship conducting intelligence in the Hawaii area.

The second main object of intelligence - the aircraft carrier "Midway" as part of an aircraft carrier group on Thursday 9 September left the base in Yokosuka (Japan), was discovered by our reconnaissance ship "Kursograf", but withdrew from tracking and went to the south westward towards the Strait of Malacca.

The second day of the aircraft carrier "Midway" in radio is not marked. Space reconnaissance does not observe him either.

We settled in the office of the 1 group of analysis of the current situation of the information center of the PF Intelligence. At that time, I served as deputy head of the information center for intelligence of the Pacific Fleet, and Chudin was the head of the 1 group. Reviewed all reports from parts and ships, space reconnaissance data. Nothing else could suggest: the aircraft carrier "Midway" departed either to the Indian Ocean, or to the Philippine Sea for training. At that calmed down. Then, “backdating”, during the “flight debriefing”, we learned that our coastal intelligence, which controlled the radio network of the operational control of the US armed forces, did not pay attention to the fact that the combat control signals had ceased to be transmitted to the radio networks. That is, the radio networks were put on high alert for the transfer of actual combat orders.

Already then another truth from this episode I understood: “You cannot rely on stereotypes. We must assume the worst options. For example, the secretive deployment of AUG to the coastal coast or to Kamchatka. If we are ready to meet this threat, then we will be fully armed. " After the events of September 1982, I was convinced of one thing, as in probability theory: “A false alarm is better than a goal omission”. But that was later. Then the chain of punctures began, which allowed us to call them as "Soviet Pearl Harbor".

On the same day, a pair of reconnaissance aircraft TU-95 of the RC of 304-ODRAP flew from the airfield Khorol to the central part of the Pacific Ocean to clarify the location of the AUG "Enterprise". As it turned out, when flying east of the Kuril Islands, the operator of the radar in the porthole found a group of lights, but did not attach any importance to this, since he was faced with the task of detecting the AUG Enterprise. With this task, the pilots successfully coped. In fact, they flew just above the AUG "Midway" ships, which covertly deployed under Kamchatka towards the AUG "Enterprise" to form an aircraft carrier strike force (AUS).

In the evening, on Saturday, there were reports of fires in the barracks of our radio-direction-finding stations on Fr. Iturup and in b. Providence with an interval of 10 hours. This significantly hampered the work of our direction finding network. I do not exclude that this was the actual working off of the American special units “SEAL” (“sea lions”) on our territory.

12 September, Sunday. In the morning, on the orders of the Navy Headquarters, a pair of reconnaissance aircraft TU-16P 169 of the Combined Air Force THF airborne reconnaissance aircraft take off from the Yelizovo airfield (Kamchatka) to explore the AUG Enterprise. According to their report, they were intercepted by fighter aircraft carrier-based carrier. And one more puncture. In the report, they do not indicate the types of fighters that accompanied them. As it turned out from the pictures, they were intercepted by the F-4 “Phantom” fighter jets, which remained only on the Midway aircraft carrier. The remaining aircraft carriers were re-equipped with new F-14 "Tomkat" fighters.

Thus, we remained in the dark about where the Midway AUG is located. And only on the afternoon of Sunday, a report was received from our coastal radio squadron in Kamchatka that our posts commemorate the work of the ships at frequencies of the AUG Midway intra-firing link.

It was a shock. The radio finding results showed that the newly formed carrier-assault strike compound (Enterprise and Midway), consisting of more than 30 ships, maneuvers 300 miles southeast of Petropavlovsk-Kamchatsky and conducts flights of deck aircraft at a distance of 150 km from our coast. Urgent report to the headquarters of the Navy. Commander-in-Chief of the Navy Admiral of the Fleet of the Soviet Union Gorshkov SG make a decision immediately. Urgently send the Sentry Guard patrol ship, three 671 RTM multi-purpose nuclear submarines to track the AUS, organize continuous aerial reconnaissance, bring the entire naval carrier of the Pacific Fleet fully operational, establish close cooperation with the air defense system in the Far East, and bring it into full combat readiness all parts and ships of the intelligence of the Pacific Fleet. In response to such aggressive actions by the Americans to prepare for the departure a naval division of the naval-carrying aviation in readiness, on Monday to designate an airborne missile attack on an aircraft carrier. At the same time, multi-purpose nuclear-powered submarines with cruise missiles were also preparing to strike.

13 Monday, September. The reconnaissance of the Pacific Fleet will have to locate the AUS and deploy a naval missile-bearing aviation division. But at that time, radio silence was introduced on the ships of the US aircraft carrier. All radar stations are turned off. We are carefully studying the data of optical space intelligence. There is no reliable data on the location of aircraft carriers. Nevertheless, the departure of the MRA from Kamchatka took place. In an empty place.

Only a day later, during Tuesday 14 September, we learn from the data of the air defense posts on the Kuril Islands, that the carrier strike force is maneuvering east of the island of Paramushir (the Kuril Islands), conducting flights of carrier-based aviation.

Then they managed to send the sentry ship “Storozheva” to the aircraft carriers (TCR “Watchdog” at one time gained notoriety at the Main Command of the Navy after the well-known events in the Baltic Sea connected with the hijacking of the ship in 1975 under the command of the Kremlin’s politician. the crew was disbanded, and the ship was transferred from the Baltic to Kamchatka). Now this ship has become a direct tracking ship for the AUS. Multipurpose submarines sent to monitor the American AUS did not quite cope with their tasks, as this is the most difficult task for the submarine commander. It is necessary to try to be undetected in the composition of the order of connection.

Ultimately, the US carrier strike force passed east of the Kuril Islands, revealing the capabilities of the Soviet air defense to protect its borders. The apotheosis of this transition was the violation of the airspace of the USSR in the area of ​​the Small Kuril chain (the islands of Tanfiliev, Anchuchin, Yuri, Polonsky, Green, Shikotan) by aircraft of carrier-based aircraft. It turned out that our "all-weather" fighter aircraft, represented by outdated MIG-19 and MIG-21 fighters, is not able to withstand the American decked-off phantom and attack aircraft "Intruderam." The weather did not allow them to use. After this next spit in our direction, the carrier connection (Enterprise, Midway) through the Sangar Strait entered the Sea of ​​Japan. Here, of course, they were waited by a whole lump of opposing forces: a separate air division of naval rocket-carrying aircraft, a division of multipurpose nuclear submarines, the aircraft carriers Minsk and Novorossiysk, the heavy nuclear-powered cruiser Frunze. Having fulfilled the strikes of carrier-based carrier aircraft along the coast of Primorye, the carrier-based compound successfully sailed through the Korean Strait to the Yellow Sea. This ended the naval exercises of the Pacific Fleet. Flitex-82. The system of operational management of the US Armed Forces has earned the same mode. And we at this time began to sort out our mistakes in the composition of a special commission. But their results are not presented until now.

Ctrl Enter
Noticed oshЫbku Highlight text and press. Ctrl + Enter
We are
Protecting the Pacific Fleet Water District in the Soviet-Japanese WarMilitary Intelligence in the Battle of the Caucasus
31 comment
Information
Dear reader, to leave comments on the publication, you must to register.