October 28 2013
90
Man in tank will win, but not without outside help: observation, reconnaissance and mortar platoons will soon become an integral part of every armored battalion. "Beginning of a new path" 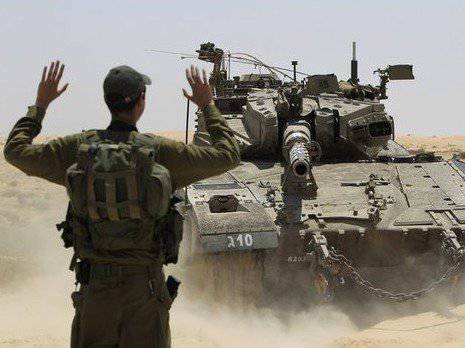 Despite a significant reduction in the budget of the Ministry of Defense of Israel, in the coming weeks, the Tsakhal armored corps will begin a reorganization procedure, as a result of which the corps will differ significantly from what it looked like in recent decades: according to a plan approved in recent weeks, the tank corps will also be reinforced in the coming appeals of recruits rotami mainly from combat brigades.

According to the plan, a company consisting of three platoons will be formed in each tank battalion of a brigade of regular troops: a mortar, a surveillance and reconnaissance team that will fight side by side with tanks and will move on armored personnel carriers and off-road vehicles such as Hamer. In addition to basic combat training, fighters of the reconnaissance platoon will undergo a course of “preparing the routes”, as a result they will be able to determine which routes the tanks will be able to advance and will guide the rest of the units.

“The tank corps has taken a new path,” said the commander of the armored forces, Brigadier General Shmuel Olansky (שמואל אולנסקי). “We are creating a battalion battle group with powerful capabilities and a combat support system that will act shoulder to shoulder with tanks. Taking into account various limitations, we want to create something very strong and effective — a battle group capable of coping with everything that lies ahead of it.”

Modern battle has changed
Already in November of this year, the program will come into effect, armored troops will open two new training courses. The first course will be designed for tankers, and the second for infantrymen, who are already called "support systems".

At the same time, the 188 and 7 brigade fighters will be retrained from tank crews to infantrymen with new capabilities. This process may take about four months, in the end two companies will be created in the new format. By July 2015, the reform of the entire armored corps will be completed and in three regular brigades in each tank battalion there will be a special auxiliary company of infantrymen.

A senior military official said today that the changes began after painstaking work during which the armored corps conducted research and revealed a number of parameters that need to be changed, including detecting the enemy’s location and conducting combat operations in a limited area and urban areas where the tank’s capabilities are limited and therefore it requires the assistance of infantry to improve its capabilities, the transfer of information and operational targeting not currently available to the tank.

“We thought that the new tank would cope with all the problems, and now we realized that a new combat battalion group was needed,” the source added, “Considering the new combat battalion group being created, we understand that this is a little different from what we have and we clearly that we now have the opportunity to adjust the armored forces to the changed battle conditions. "

According to the source, in the command of the Ground Forces they came to the conclusion that the armored corps needs new capabilities, and it also needs to prepare forces capable of solving current security problems on the one hand and participating in a full-scale war on the other. "The reality of the land battlefield is changing and the changes we have made are necessary for further dominance. We are watching what is happening around and trying to make the tank corps better, with a different approach and more advanced."

Ctrl Enter
Noticed oshЫbku Highlight text and press. Ctrl + Enter
We are
Recruits lured to NATO for 500 rubles a day and iPad 2Para Commando Belgium
90 comments
Information
Dear reader, to leave comments on the publication, you must to register.