How to eliminate Bandera 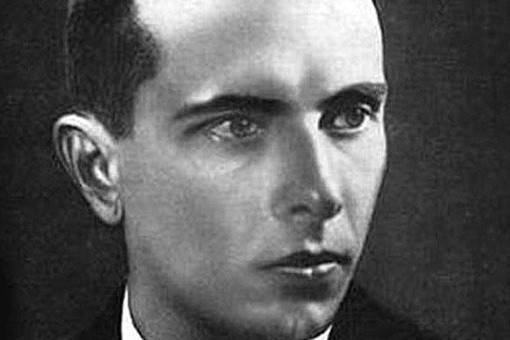 October 15 The 1959 of the year in Munich, during an operation carried out by the KGB, killed the leader of the Ukrainian nationalists Stepan Bandera. This date was a reason to remind (and those who do not know - to tell) about how it was, to talk about Bandera himself and his role in stories Ukraine.

October 15 1959 was delivered to a hospital in Munich with a blood-soaked face. The neighbors of the victim who called the doctors knew him as Stefan Popel. When the doctors arrived, Popel was still alive. But the doctors did not have time to save him. Popel died on the way to the hospital, without regaining consciousness. Doctors could only ascertain death and establish its cause. Although the one delivered had a crack at the base of the skull, which was obtained during a fall, heart failure was the immediate cause of death.

When viewed on Popele found a holster with a pistol, this was the reason for a call to the police. The police officers who arrived arrived quickly and established that the real name of the deceased was Stepan Bandera, and he is the leader of the Ukrainian nationalists. The body was examined again, more carefully. One of the doctors drew attention to the smell of bitter almond, walking from the face of the deceased. Unclear suspicions were confirmed: Bandera was killed: poisoned with cyanide potassium.

The Organization of Ukrainian Nationalists (OUN) originated in Western Ukraine in 1929 in response to the oppression of the Ukrainian population of Galicia by the Polish authorities. According to the agreement of 1921, Poland pledged to give Ukrainians equal rights, autonomy, university and Poles to create all conditions for national and cultural development.

In fact, the Polish authorities pursued a policy of forcible assimilation, polishing and polishing against Galicians. In local governments, only Poles were appointed to all positions. Closed Greek Catholic churches and monasteries. In few Ukrainian-language schools, Polish teachers taught. Ukrainian teachers and priests were persecuted. Reading rooms were closed, Ukrainian literature was destroyed.

The Ukrainian population of Galicia responded with mass actions of disobedience (refusal to pay taxes, participate in the census, in elections to the Senate and Sejm, serve in the Polish army) and acts of sabotage (arson of military warehouses and government offices, telephone and telegraph damage, attack on gendarmes) . In 1920, the former military personnel of the UPR and ZUNR created the Ukrainian Army (Ukrainian Military Organization), which became the basis of the OUN created in 1929.

Bandera was born in 1909 year in the family of a Greek Catholic priest, a supporter of the independence of Ukraine. Already in the 4 class, the Bandera gymnasium became a member of the semi-legal nationalist organization of students, took part in organizing actions to boycott and sabotage the decisions of the Polish authorities. In 1928, Stepan became a member of the VDU, and in 1929 - OUN. 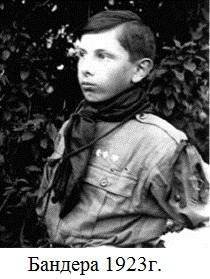 Thanks to his outstanding organizational skills, he quickly became a leader. Since the beginning of the 30-s, the leadership of the organization entrusts Bandera with the organization of combat and terrorist actions. Bandera considers enemies not only Poland, but also Soviet Russia. He organizes the assassinations of the secretary of the Soviet consulate in Lviv, A. Mailova (October 1933) and the Minister of the Interior of Poland Peratsky (June 1934).

Since 1939, Bandera is a recognized leader of the revolutionary wing of the OUN, leader and ideological inspirer of the underground nationalist movement in Western Ukraine. The commander of the Ukrainian Insurgent Army (UPA), Roman Shukhevych, has always stated that he reports exclusively to Bandera.

In the fall of 1949, the Supreme Court of the USSR at its closed meeting sentenced S. Bandera to an exceptional measure of punishment - the death penalty. The bodies were tasked to eliminate the leader of the OUN.

In May, 1958, the entire OUN leadership gathered in Rotterdam. May 23 at the city cemetery at the grave of the founder of the organization Yevgeny Konovalets held a mourning rally dedicated to the 20 anniversary of his death. (May 23 1938, Konovalets was killed by NKVD agent P. Sudoplatov.) Bandera spoke first at the rally. Among those present - a young man, according to the documents - Hans Joachim Budaight, a native of Dortmund. In fact, it was the KGB agent Bogdan Stashinsky, who was tasked with eliminating the OUN leader. 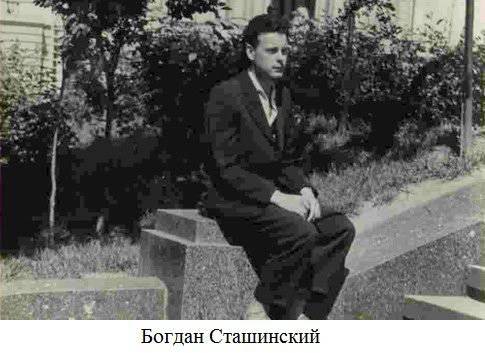 OUN member Stashinsky was recruited by the NKVD in 1950 year. His track record includes introducing Bandera into the squadron and the subsequent destruction of the gang, killing one of the OUN leaders Lev Rebeta in 1957. From 1958, his goal is Bandera. Stashinsky arrived in Rotterdam for the sole purpose of seeing the “object” of the future action in person. He gazes at the speaker. 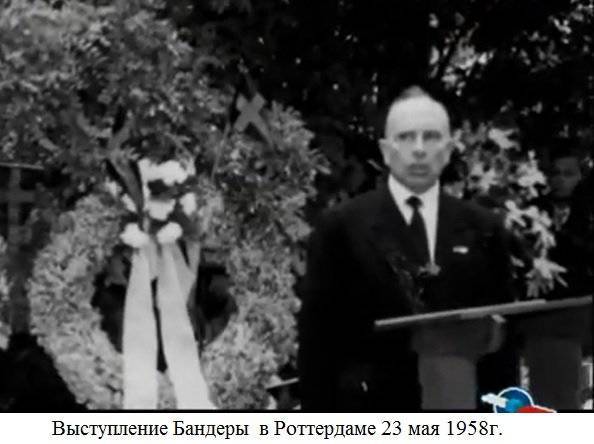 Everything is ready for the operation

In May 1959, Stashinsky arrived in Munich. It is somewhere here, according to the KGB operative data, that S. Bandera lives under a false name. By October, Stashinsky tracked down Bandera and found his address - Kristmanstrasse, 7. Liquidator received a secret weapon - double-barreled cylinder with a spring and a trigger mechanism, charged with ampoules with hydrocyanic acid (potassium cyanide). Under the influence of a pore charge of low power, the ampoules are broken up, the poison is thrown a distance up to the 1 meter. The person who has inhaled the couple loses consciousness, the victim's heart stops. The performer of the action himself takes a drug that neutralizes the effect of the poison. 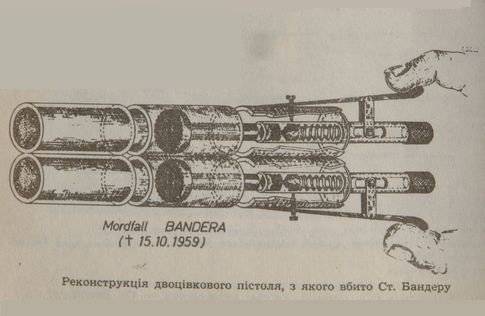 That is how Stashinsky in 1957 was killed Lev Rebet. The operation to eliminate Rebet was successful: the doctors stated that he died of a heart attack. Now it's Bandera's turn.

15 October around 12: 50 Stashinsky, a few minutes ahead of Bandera, comes into the entrance of the house and rises several spans up. Hearing the front door slam, he put an antidote pill under his tongue and began to descend. Having come up with Bandera, Stashinsky threw forward his hand with the cylinder wrapped in a newspaper and released a jet of poison right in the face of the OUN leader. Without slowing down or looking around, the agent headed for the exit. Already closing the door, he heard the sound of a fallen body behind his back. 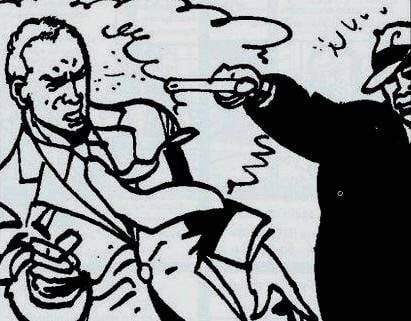 In Moscow, the KGB Chairman, A. Shelepin personally congratulated the agent on the successfully completed assignment and in a solemn atmosphere handed him the Order of the Red Banner. Taking the opportunity, Stashinsky asked Shelepin for permission to marry his long-time girlfriend, East German Inga Pol, and received consent.

Inga, whom Bogdan, in violation of all instructions, told about his service in the KGB, became frightened and began to persuade her husband to flee to the West. Almost 2, she convinced Stashinsky that sooner or later the KGB would liquidate him as an unnecessary witness, and in the end she was able to persuade him to flee. August 12 1961, just one day ahead of the beginning of the construction of the Berlin Wall, the couple Stashinsky crossed the border, dividing the city into sectors. Bogdan surrendered to the police and appealed to the authorities for political asylum. He spoke in detail about the actions he carried out to destroy the political opponents of the Kremlin. The trial of the defector in Karlsruhe was widely reported in the international press (except for the Soviet one) and even caused some changes in the German law system. Stashinsky was given 8 years. 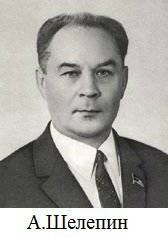 The echo of the Karlsruhe process has reached the USSR. Only its consequences were slightly different ... Alexander Shelepin, the Iron Shurik Chairman of the KGB, and his 17 KGB officers of the highest ranks lost his post.

Of the years awarded to 8, Stashinsky served four years. After release, his tracks are lost. There are versions that with the help of plastic surgery they changed his appearance and then transported him to South Africa. There is information on the Internet that, allegedly at the beginning of 2000's, two elderly foreigners, a man and a woman, came to the native village of Stashinsky Borshevichi near Lvov. And it seems that one of the villagers recognized in the old man a native of this village, Bogdan Stashinsky, a former KGB officer who began his career in the bodies with treason, betraying it and ending it.

What was the significance for Ukraine of the OUN struggle?

We will try to get rid of ideological biases (although it is difficult) and impartially evaluate the activities of Bandera for Ukraine. Was she a boon?

What are the chances of winning OUN?

1. No external support. (The partisan of Belarus was supported by Moscow, the Afghan Mujahideen - by the USA, the Chechen militants - by the Islamic world, the UPA - by no one).

2. Scattered detachments were confronted by the winning army in World War II.

3. They fought the nationalist underground against the NKVD, the MGB and SMERSH, whose employees perfected their professionalism in the fight against the Abwehr and the Zeppelin SD.

4. At the head of the state was a leader who did not hesitate to make tough and even cruel decisions.

What could all this oppose OUN? The story itself has long ago answered this question: the underground movement in Ukraine was eventually defeated, and the “legacy” of Bandera “hiccups” to this day in Ukraine, which remained a divided power.

With their latest order from 19.01.1945, the leadership of the Home Army, thanking all their soldiers for serving their homeland, freed them from the oath and declared self-dissolution. Yes, Soviet Poland was not the state that many Poles dreamed of. But the AK leadership recognized the futility of the struggle in Poland occupied by the Red Army and did not blow up the flames of civil war. Not all AKovtsy laid down their arms, but this was already a personal choice of each individual, to which the AK leadership no longer had anything to do.

Bandera until the last day of his life was a supporter of the struggle with the Soviet authorities. Neither the chronicles personnel nor the records of his speeches survived, but all contemporaries are unanimous in their opinion: he was a charismatic leader capable of persuading and leading people. And people followed him. Thousands, tens of thousands of men and women — the best representatives of the Ukrainian people, their pride, its color, its gene pool, ready to die for Ukraine, at the call of Bandera, were included in the struggle and died, died, died.

Huge victims were carried by civilians. Anyone who gave a member of the UPA fighter or a UPA fighter a piece of bread, shmat lard or a piece of milk became an accomplice and paid a heavy price for it. Tens of thousands were repressed, imprisoned, camped, evicted. The NKVD troops following in the footsteps of the UPA did not fight in white gloves. (From the report: “500 bandits and their accomplices were destroyed during the operation, 15 rifles were captured” 500 / 15! Comments needed?)

Those who closed the door in front of “the fighters for the freedom of Ukraine” were enrolled in the “accomplices of the Muscovites”. Executions of apostates were so terrible (atrocities!) That death from a bullet or a loop was bestowed as the greatest mercy that still had to be earned! Not only support, but also the fear of the people held the nationalist underground.

The fight against the UPA was conducted not only by the forces of the NKVD troops, but also by fighter battalions formed from the population of the same districts and villages. The hawks and Bandera faced in battle were often fellow villagers, they knew each other by name and face. Ukrainians killed Ukrainians. How many of them died in the civil war inflated by Bandera? Hundreds? Thousands? Tens of thousands?

So who says there that Bandera is the glory of Ukraine?

Bandera is the trouble of Ukraine.

Ctrl Enter
Noticed oshЫbku Highlight text and press. Ctrl + Enter
We are
Nightingale song of Stepan BanderaCommissar Popel and the feat of the Soviet soldiers under Dubno
109 comments
Information
Dear reader, to leave comments on the publication, you must to register.