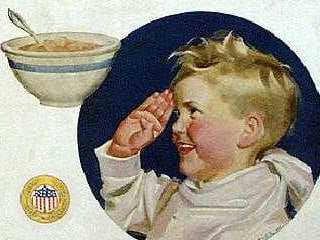 From the editors. September 18 on our website published an article by Alexander Pavlov “Breakfast”, which described one significant element of America’s modern national identity - the inclination of Americans to poetize the morning food intake.


Morning breakfast is not homemade, but produced in a special cafe where you can serve pancakes with maple syrup, famous for Rain Man, or hot coffee with donuts, sung at Twin Pee, or, at worst, milk with cornflakes All this has not simply grown into our perception of America, but it has become in the pretty way that, through Hollywood, America has made global.

Great connoisseur of American stories the era of two world wars, Mikhail Shevlyakov in his new text reveals that much of what became part of America’s daily life was born during the war, largely due to the need to adapt to its difficult realities. And the same milk with the same cornflakes just from this series ...

Nowadays, Jingle Bellz and Santa's red pants are firmly associated with Coca-Cola advertising, but in the first half of the 20th century ringing of bells and bright red were an attribute of the Moxie trademark, for which in our time there was no place on the Olympus carbonated.

The battles for the consumer were then not only on the air of radio stations, on billboards along the roads and on bright posters in pharmacies and eateries. This battle went on in military depots: during the years of the Second World Coca-Cola became an army supplier, undermining its competitor positions and winning millions of consumers.

One of the graphic symbols of military history became advertising posters on which American soldiers, pilots and sailors hold bottles of Coca-Cola; The artists of the company painted the exact same bottles in the hands of Soviet and Chinese pilots.

Of course, Moxie also produced patriotic posters, but the advantage was on the side of her competitor, who gained access to the state-owned sugar reserves — and took full advantage of this.

To ensure the fighting of the American army in North Africa, three million bottles of ready-to-drink were sent, and in addition, a concentrate and a factory to organize the spill on the spot. Having started in 1939 with five plants outside the US, Coca-Cola expanded this base to sixty-four plants to 1945, and the world began talking about coca-colonization.

Similarly, earlier, during the First World War, they acted in the struggle for consumers and tobacco companies - supplying cigarettes for the army at a reduced price, they secured a post-war multi-million army of smokers.

We rarely think about how exactly our everyday life was formed at the level of everyday trifles, habits, traditions, people get used to this “background of life”, it seems to them that this background has always been. However, it turns out that a significant part of what is called the “American way of life”, even those elements that have reached symbolic status, are all part of fairly recent traditions, and many of them are directly related to the wars that the USA waged in the XX century.

To win on the battlefields, it was first necessary to ensure victory on the "home front." The First World War sent Europeans from factories and fields to trenches, and the United States had a great challenge — and a great chance — to become a global supplier.

But it was not enough to provide his army and half of Europe weapons, it was also necessary to feed millions of people, so one of the slogans of that time was “Food Will Win the War”. Led by talented organizer Herbert Hoover United States Food Administration successfully coped with its task. However, in order to provide soldiers with meat and flour, it was first necessary to reduce the consumption of these products by the civilian population within the United States. “Days without meat” and “days without bread” were introduced - and they were replaced by milk and cornflakes for breakfast.

What became for many the symbol of the American morning was really widely spread only as a forced measure of the wartime - but nothing is more permanent than temporary.

The First World brought America not only milk and cereal, but also suffrage for women.

The success of suffragists was in no small measure predetermined by the increasing role of female workers in America, which became the “global arsenal”. The same need to work for the victory of America and the Entente over the Central Powers pulled women out of corsets and shortened their skirts. “Gibson Girls”, which have been decorating pages of magazines for two decades, are a thing of the past, now the American’s ideal was even more decisive and independent, now they were not only the companions of brave motorists, not only decidedly drove themselves behind the wheel - American during WWI even tried on take on the uniform of street traffic controllers, giving commands to male drivers.

It was the First World War that became the time when ordinary Americans discovered Europe and returned from there completely different from what they were before. It was from the mud of the trenches and short rest in Paris, which became the near rear, that came the life principle that the legendary “roaring twenties” created: live for today, because tomorrow may not be.

Yesterday's provincials were caught up in a whirlwind and thrown into the world of war, where the day could accommodate more than previous years. Joe Young and Sam Lewis grabbed the very essence of change on 1918 by writing an instantly popular song “How 'Ya Gonna Keep' Em Down on the Farm? (After They've Seen Paree), and the nurses who were kissing today with one convalescent lieutenant, and tomorrow with another, remained only half a step before turning into flappers, a carefree symbol of the twenties - and an integral part of a whole layer of American culture.

In order to write the best-selling book “Farewell to Arms”, Hemingway first had to become an ambulance driver himself and be under fire. To get to Europe as a soldier, and only then return to it as a writer - that was his way.

The colossal dispersal taken by the American industry for military purposes turned out to be even redundant - and much of what was done for the needs of the war, but remained unclaimed, passed into the category of civilian goods. In the front-line trenches, the former solid onion watches on the chain gave way to wrist watches, and soon after November 1918, those of them that the officers did not manage to get, sold on the cheap sales and were literally piled in the shop windows once and for all be a status symbol.

A similar situation arose after World War II - then during sales from army warehouses even portable radios were offered, positioned as a more convenient and cheap means of communication for farmers than a telephone, and light training airplanes became an ordinary means of transport.

The war brought with it another level of women's rights and freedoms, and the grown daughters of suffragists, whose hands the 1940s needed for America in even greater numbers, wrote to their husbands in the army and the fleet: “Dear, now I fill in the checks of our family ... "

What was brought in by the days of war quickly grew into the picture of the American world, becoming part of the peaceful days. Leather jackets - previously used by pilots - have become part of the legendary image of bikers. Returning from the Korean War, they took their places in the cabins of hot rods - and this laid the foundations for a new car tuning industry and created the atmosphere in which 1960-70's muscle cars, a legend of the American era, were born and style.

Rail passenger transportation in the United States, having reached its peak of greatness in the 1950s, has now lost its former scope and lost ground to airplanes - but the very existence of a civil aviation in its current form, it would be impossible without the experience of organization and management that transport aviation gained in the war. And this is not only about the Second World War, hot, when American planes massively and regularly flew even through the "camel hump", overcoming the heights of the Himalayan ridge on the way to China, but also about the cold war - on the air bridge to Berlin during the 1948 crisis .

The era of television development would not have been so turbulent if it had not been for the active development of electronics during the war in the Pacific Ocean, when it depended on whether the radio bombs from anti-aircraft missiles would work, if the sailors could repel the attacks of Japanese aircraft on American ships or go to the bottom .

“I have a dream,” said Martin Luther King and his words became the banner of the civil rights struggle, but civil liberties were gained not only by 1960’s dream. Two decades before, Franklin Delano Roosevelt signed the presidential decree 8802, which confirmed the abolition of racial discrimination in employment in the military industry - not for the sake of civil rights as such, but for the sake of ensuring the work of the industry and reducing social tensions. war

The sixties were a time of not only dreams, but also a time of active action - but the roots of this action went back to the racial insurgency in Harlem 1943 of the year, to which, despite its magnitude and considerable damage, the authorities closed their eyes - for the sake of maintaining the country's unity in of war.

The current high level of state intervention in the life of Americans, which is often perceived even as an encroachment on freedoms, is also rooted in wartime. Beginning with the events of the First World War (when, ironically, the opponent intervened was Hoover’s intervention), and then during World War II and the subsequent American wars, the state kept a closer look at the citizen, until finally this attention reached its current forms .

The state is interested in not only the bare feet of passengers at airports and Internet accounts - in terms of health insurance reform, which bothers some Americans, it also contains elements of privacy: a pebble that has gone down in extreme conditions of war has created an avalanche largely become commonplace American life.

Ctrl Enter
Noticed oshЫbku Highlight text and press. Ctrl + Enter
We are
My grandfather's front-line letters (part 2)Advice of the Minister of War field marshal D.A. Milutin to an officer appointed to a higher command or staff position
17 comments
Information
Dear reader, to leave comments on the publication, you must to register.