October 28 2013
22
One of the main issues in the context of modern war is logistics. For an effective fight against the enemy, it is necessary to establish a transport system in the shortest possible time, capable of delivering troops to the necessary areas, and then supplying them with everything necessary. At the present level of development of vehicles of various classes, the transfer of troops is often a long and difficult task. Thus, in the course of recent conflicts, the US armed forces spent several weeks on redeploying one division. Such rates of transportation of personnel, military equipment and the necessary equipment had a corresponding impact on the whole course of the fighting. At the beginning of the last decade, Boeing began working on advanced vehicles. 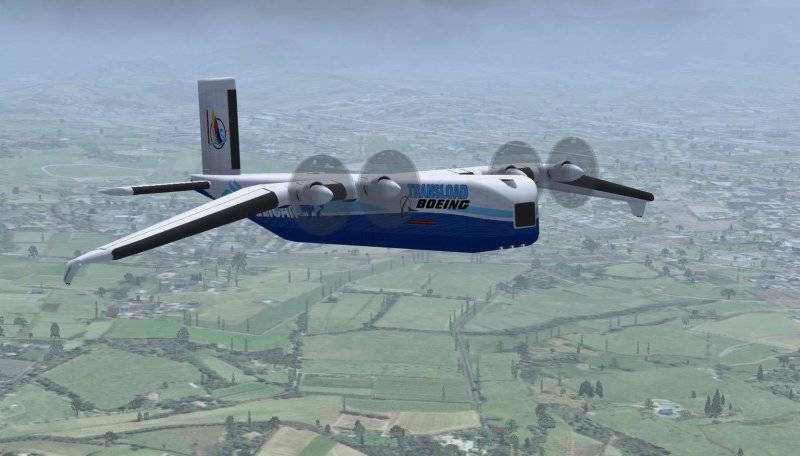 After analyzing the needs of the army and the capabilities of modern technology, the employees of the Phantom Works division, which is part of the Boeing company, identified the common features of the new vehicle for the military. It was decided that the highest efficiency in the transportation of various military goods can be shown by an aircraft using so-called. screen effect. Flying at a relatively low altitude is able to provide such a technique with good speed and range, and most importantly - carrying capacity. It was assumed that the new vehicle would be a kind of “hybrid” of a military transport aircraft and an airplane.

It should be noted that in the course of the first studies, the staff of the Boeing Phantom Works considered other classes of vehicles, but the ground effect vehicle was recognized as the most convenient and efficient. The fact is that transport ships, having a sufficient load-bearing capacity, cannot reduce the time for the transfer of troops, and airplanes lose a load-bearing capacity at sufficient speed. Finally, a preliminary draft of a cargo airship was considered, but even he did not suit the developers, since such a technique does not provide significant advantages in terms of speed or carrying capacity, but at the same time needs a special infrastructure. The most convenient class of a promising vehicle was recognized as an ekranoplan.

After determining the class of the aircraft, the project was named Pelican ULTRA (Ultra Large Transport Aircraft - “Super Heavy Transport Aircraft”). At the first stage of work on the new ekranoplan, the Boeing company employees created at once three draft designs of a transport vehicle, differing from each other in size and weight parameters. An important feature of the project was the minimal use of new technologies, as well as suitability for commercial exploitation. Of the three variants of ground effect vehicles with take-off weight in 1600, 2700 and 4500 tons was selected second. It was with such dimensions that a promising vehicle could show the best ratio of carrying capacity, flight performance and economy.

The Pelican ULTRA aircraft was supposed to resemble existing military transport aircraft. An ekranoplan was proposed to be equipped with a straight wing and a developed tail unit. For the convenience of placing cargo, the fuselage of the aircraft, according to the project, had a section close to rectangular. With the usual aerodynamic design and the usual appearance of a ground-driven vehicle, the Pelican ULTRA should have a record size. So, the wingspan in the project reached 152 meters, and the total length of the machine was equal to 122 meters. With a chord of about 30 meters, the wing should have an area of ​​the order of 4000 square. meters To improve the screen characteristics of the wing, it was proposed to perform its end portions tilted down. This made it possible to optimize the flow around the bearing surface and thereby increase the payload. The entire rear edge of the wing was given under advanced mechanization, designed to facilitate take-off and landing at existing airfields. 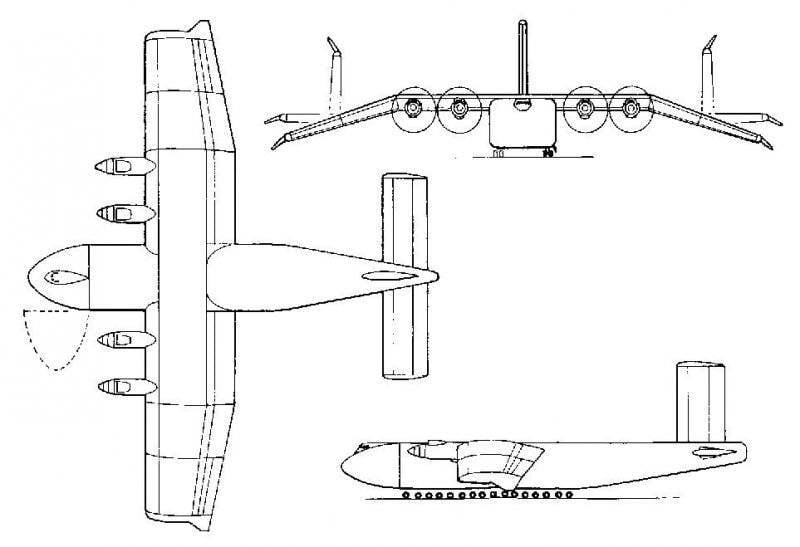 Such large dimensions of the ground effect vehicle required the use of a double-deck fuselage layout with a separate crew cabin. The latter was proposed to be placed in the front of the fuselage, in a sealed blister. Almost the entire main body of the fuselage height 6 meters was supposed to give a non-sealed cargo compartment and divided into two volumes. According to calculations, it was possible to place up to 100 (in two tiers) standard 20-foot containers on the lower deck. Another 50 of the same containers could take the upper deck. In addition, in the center section of the thick wing provided a place for 40 containers. For loading and unloading the aircraft had to have a deflectable nose fairing and a hatch in the tail. Thus, in the commercial version of an ekranoplan Pelicvan ULTRA could compete with rail traffic, pushing trains at the expense of its speed and range.

In the military version, a promising winged aircraft could simultaneously take on board up to 17 tanks M1 Abrams. For comparison, the largest of the US military transport aircraft Lockheed C-5 Galaxy can only carry two such tanks at a time. According to some estimates, the Pelican ULTRA aircraft, if necessary, could ensure the transfer of one land division from the USA to Iraq in 5-6 days, i.e. several times faster than similar operations were carried out in practice using military transport aviation и fleet.

A transport ekranoplan with a take-off weight of about 2700 tons and a payload of 1200-1300 tons should have had a suitable powerplant. After analyzing several options, the project authors focused on four propulsion systems located on the wing. Especially for the new WIG it was proposed to create a gas turbine engine based on the structures used in shipbuilding. The estimated power of each of the propulsion systems, including two gas turbine engines, was supposed to reach 60-80 thousand hp Coaxial multi-blade screws with a diameter of about 15 meters were chosen as a mover.

In view of the enormous take-off weight, it was intended to equip the perspective transport ekranoplan with the appropriate chassis. 38 racks with twin wheels should be placed under the fuselage. Such a system could significantly complicate the maneuvering at the aerodrome and made it difficult to take off, but provided an acceptable load on the runway. In the set of measures applied to ensure the use of modern airfields, it was proposed to equip the wing end parts with lifting mechanisms. In this case, the wingtips during take-off and landing did not risk hitting the ground and damaging themselves or ground objects.

A heavy-duty powerplant, advanced wing mechanization and an electrical remote control system could provide acceptable take-off and landing characteristics. So, it was claimed that the Pelican ULTRA ground effect vehicle could take off with a takeoff of no more than 2200 meters. The main flight mode was considered to be at a speed of about 460 km / h at an altitude of no more than 10-20 meters above the surface. If necessary, the transport vehicle could accelerate to a speed of 720-725 km / h and, like a full-fledged aircraft, rise to an altitude of about 6000 m. However, when ascending to a height, the calculated flight range was significantly reduced. When flying using the screen effect, the Pelican ULTRA could deliver cargo to a distance of about 10 thousand miles, but when flying at an altitude this parameter could not exceed 6,5 thousand miles.

According to some reports, by the year 2002, Boeing began to prepare a technical project of a promising ekranoplan. By the end of the decade, it was planned to carry out a number of important preliminary tests, and by 2015, to build a prototype transport vehicle. 5-6 years were devoted to testing and fine-tuning in the original schedule. Thus, the first serial Pelican ULTRA were to enter service in the early twenties. However, in the same 2002 year, after several promising press releases and laudatory articles in the press, the flow of information on a bold new project ceased. Probably, some features of the perspective vehicle did not allow to complete the project and start building a prototype.

Exact data on the completion of the Pelican ULTRA project is not available. Because of this, a conspiracy version appeared in the middle of the last decade, according to which the project of the Boeing Phantom Works organization turned out to be so promising that further work on it continued in the strictest secrecy mode. Due to the lack of accurate information, it is impossible to say how and why the Pelican ULTRA project was closed or classified. The most likely and plausible is such a variant of events in which the design of a promising transport vehicle faced serious technical and technological problems. The scale and complexity of these problems could put an end to the whole project. As a result, the most interesting project of the largest and heaviest aircraft in the world remained at the preliminary design stage, while the US military still has to transport equipment and cargo on existing aircraft and ships.