October 28 2013
48
During the modernization of the Russian armed forces, it is planned not only to update the fleet of military equipment, but also to change the structure of a number of units, units and formations. The current plans of the Ministry of Defense imply the strengthening of the airborne troops, for which some units will be handed over to them. In addition, up to 2020, new formations will appear as part of the Airborne Forces. It is expected that such measures will increase the combat potential of the landing forces. 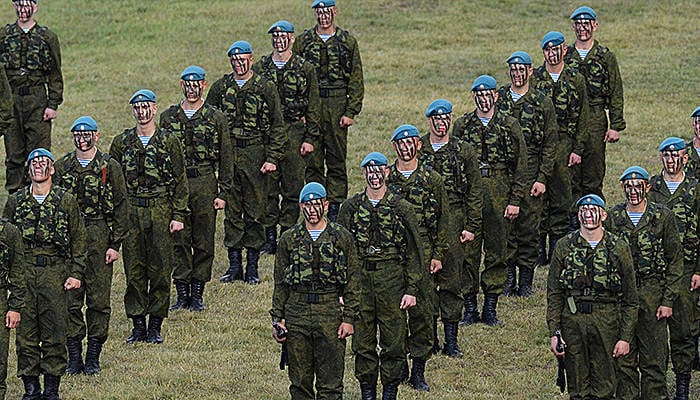 The first notable step in updating the airborne troops was the decree of the President of October 11 and the directive of the Chief of General Staff, according to which the airborne forces will include three units. The air assault brigades deployed in Ussuriysk, Ulan-Ude and Kamyshin were previously part of the Eastern and Southern military districts. Now they should become airborne units. In the near future, all the procedures necessary for the transfer of brigades under the command of the Airborne Troops Command will be carried out. Special commissions should check the condition of the equipment and infrastructure. Already on December 1, the air assault brigades should begin a new academic year on training programs developed for the Airborne Forces.

According to the commander of the Airborne Forces, Colonel-General V. Shamanov, the aim of transferring three brigades is to create a single command of all airmobile forces of the army and “rapid reaction forces”. For the convenience of command and control of troops, all airmobile units are now subject to the command of the airborne troops, which should have an appropriate effect on their capabilities and interaction.

Over the next years, it is planned to take a number of measures aimed at increasing the combat effectiveness of the Airborne Forces. In May of this year, Colonel General V. Shamanov told what work is planned to be carried out in the foreseeable future. So, in accordance with the current State Arms Program, until 2020, the airborne troops will receive new weapons and military equipment (IWT). By this time, the troops should have at least 70% of the new military equipment. In addition, by the end of the decade, the Airborne Forces will fully transfer to contract service. Another feature of the reform of the airborne troops is the rejection of the two-regiment divisions. In the future, a third regiment will appear in the composition of the airborne and airborne assault divisions. At the same time, an army company will be part of all regiments aviation and a unit for unmanned aerial vehicles.

It should be noted that some measures designed to strengthen the Airborne Forces will be taken in the near future. By 2016, a new airborne assault brigade will appear, which, according to reports, will be based in Voronezh. It has already been announced that the new brigade will receive the 345 number - in honor of the 345 Guards Bagram paratroop regiment. In addition, the 45 th Special Guard Regiment will be reformed into a brigade.

The current plans of the command of the airborne troops, calculated to the end of the decade, were drawn up on behalf of the Minister of Defense. In February of this year, S. Shoigu ordered the implementation of a defense plan, as well as provide for the use of airborne forces as a rapid reaction force. Thus, all ongoing and planned for the future changes in the structure of the airborne troops can be considered a consequence of the instructions of the head of the military department.

An interesting fact is that the order to consider the use of airborne forces as a rapid reaction force was issued in February, and work on it was completed in the fall, followed by the first orders determining the further development of the armed forces. Such a pace of work can speak volumes. In particular, an opinion appeared in the foreign press, according to which with the help of such steps Russia intends not only to increase its defense capability, but also to protect itself from possible threats of the near future.

Thus, the Foreign Policy edition is inclined to associate the transformation of the structure and purpose of the Russian Airborne Forces with the expected events in Central and Central Asia. In the foreseeable future, NATO troops must leave Afghanistan. According to popular belief, after the departure of the Americans and their allies, the current Afghan government will not be able to hold power for long and will soon fall under the pressure of the Taliban. The result may be a complication of the situation in the region, to which, according to Foreign Policy, Russia is preparing, transforming the most mobile branch of the military.

The version of foreign analysts looks interesting and plausible. Nevertheless, possible problems in Central and Central Asia may not necessarily be the reason for such a rapid pace of creating a new development plan for the Russian Airborne Forces. At the same time, the rapid-reaction force, which is to become airborne troops, may well take part in the defense of the southern borders of the country in the event of an attack. It should be noted that the Airborne Forces, being the most mobile arm of the troops, must respond to any threats, and not just to those coming from the south. Regardless of the specific threats that may be faced in the future by airborne forces, the current measures are aimed at strengthening them and increasing their combat capability. Such an update and improvement of this type of troops should be carried out as soon as possible, without waiting for a reason in the form of any armed conflict.

Ctrl Enter
Noticed oshЫbku Highlight text and press. Ctrl + Enter
We are
Innovation Day of the Southern Military District: Pictures from the ExhibitionThe Ministry of Defense is starting to eliminate the Airborne Forces
48 comments
Information
Dear reader, to leave comments on the publication, you must to register.