Nato something to do. North Atlantic Alliance entangled in internal contradictions 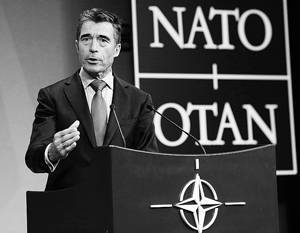 The NATO summit at the level of heads of defense ministries, which opened on the eve in Brussels, is taking place in an atmosphere of systemic crisis. And the cause of heated debate this time is not Russia, but Germany. What members of the alliance did not share, tried to find out the newspaper VIEW.


“This cooperation is bigger today than ever. We have made significant progress in fighting terrorism and supporting the Afghan army, ”said NATO Secretary General Anders Fogh Rasmussen, speaking of cooperation with the Russian Federation. An amazing thing. Despite the fact that Russia's relations with the North Atlantic alliance in recent years can be described as cool at best, the summit was not debated around Russia at all. Much more claims from the alliance formed to Germany.

Military budgets, perhaps, the main reason for the current strife in NATO. The problem is not new: since the beginning of the new century, the defense expenditures of the majority of European bloc members have declined by an average of 15%. There was a trend even before Europe suffered from the international financial crisis, and after the crisis it became clear that there was simply no extra money. They are not even in the stable economies of France and Germany, not to mention the countries that are very close to bankruptcy (starting with Greece, ending with Portugal).

Obviously, if someone is underpaid, the other begins to overpay. This “other” is the United States, whose share in total military spending has increased from 63% to 72%. Since there is no extra money in Washington either, the Barack Obama administration has set itself the goal of making the largest partners in Europe publicly declare that their expenses for the alliance will be increased. It is not the first year that the Secretary General of the Alliance Anders Fogh Rasmussen appeals to the conscience of Europeans. “If current trends in defense spending continue, it will limit the practical ability of European NATO countries to work together with their North American allies. But it would also risk losing the political support of our alliance in the United States, ”he warned the Europeans last year.

Analysts predicted a real quarrel between the US Congress and Brussels, expecting that American parliamentarians could artificially squeeze cash flow from Washington, but the Congress was distracted by health care reform and national budget disputes, so disassembly with Brussels was temporarily postponed. On the other hand, the desire to pay no longer arose among the Europeans, on the contrary, they even plan to save on the funds that will be released after the withdrawal of troops from Afghanistan. The Secretariat strongly opposes these plans. He may succeed in persuading Europe in this matter, but his hopes for increased funding are small, and the block is forced to moderate its appetites. Even with a delay, the new NATO headquarters in Brussels, worth a billion euros, will nevertheless be completed, but the number of the command structure of the unit will be reduced immediately by a third. "We will provide significant savings in the military budget, but the structure as a whole will become more dynamic, adaptive and effective," Rasmussen said he hopes.

The problem of increased US participation in the supply of the alliance is also aggravated due to political disagreements. Washington reasonably believes that the one who pays the money orders the music in practice turns out differently. For example, in the military operation in Mali, the States were less interested than France, for example, but it turned out that it was impossible to do without technical and infrastructural support from the United States. Even the ability of France to independently conduct air combat operations without the assistance of alliance partners raises questions.

On the other hand, many European countries were not eager to get involved in the Syrian conflict, which caused additional irritation from Washington. Largely due to Russia's diplomatic efforts, the war was averted, and Rasmussen recently admitted that "there is no military solution to the conflict in Syria." But the sediment remained.

Another political disagreement is connected with the European missile defense system. In Brussels, they have already confirmed that by 2018, "this system will fully protect the population of Europe and the NATO countries," while Moscow is promised "active participation." “We are ready to answer all the questions Russia may have,” Rasmussen swore, adding that it was planned to develop two missile defense centers - the Russian and NATO, which “could exchange information, engage in joint exercises, analyze external threats.” The Russian side, seeing in the implementation of this program a threat to its own security, such compromises still do not fully satisfy, but it should be borne in mind that behind such a compromise are long disputes within the alliance. The United States, Turkey and a number of Eastern European countries have long offered to give up on Russian claims, focusing on technical issues, but Paris, Berlin and Rome have consistently introduced the Russian factor into the agenda, not wanting to enter a phase of acute diplomatic confrontation with Moscow.

At the same time, France makes it clear that in the single European missile defense system, she sees no less than an attempt on her sovereignty, and this issue has not been finally resolved. The vagaries of the French in NATO has long been the talk of the town. Wanting to maintain independence, with de Gaulle, Paris had already left the military structures of NATO, but returned with Sarkozy. And now Turkey, which has a completely different approach, for example, to cooperate with Israel - an important partner of NATO, as well as with Cyprus, whose interests the island-state partners in the European Union have to take into account, is muddying the water.

Back in May last year, at a summit in Chicago, the concept of reforms in the alliance was put forward, which were called both “breakthrough”, and “large-scale,” and even “historical". But now European analysts (primarily Germans) testify that things did not go beyond conversations. The reform is not just stalling, but shelved.

The reforms concerned the same thing - money, more precisely, cost optimization. It was decided to compensate for the lack of funds by improving the coordination within the alliance, as well as through the cooperation of NATO structures with the structures of the European Union. The states that are both there and there, it seems, would undertake to improve their military potential privately, after which it would co-optise NATO potential through close interaction between members, primarily in technical and innovation issues.

Primitive this venture can be described as follows. In peacetime, country X has two squadron aircraft carriers, and country Y has none. However, the military countries of Y have a comprehensive understanding of the potential of these aircraft carriers, know how to use them and, in the event of a military situation, know how to handle them. Thus, “if tomorrow is a war,” country X and country Y will each have one squadron aircraft carrier. The military-technical potential for the period of hostilities is simply shared.

However, the coordination of defense projects remained on paper, despite all the efforts of Germany, which was the main driver of the reform.

Berlin’s offerings go even further. For better coordination within the alliance, the Germans propose to divide it into several groups with one of the key players as a conditional leader. If now 28 states are formally equal, then Berlin assumes that in each group a detachment leader should appear (something similar was already practiced by the bloc as part of military operations, for example, in Afghanistan). According to the Germans, within the framework of such “blocks inside the bloc” it will be much more convenient to achieve the desired one — the interaction of the armed forces, close military-technical cooperation (up to the creation of holdings through the military-industrial complex), military potential cooperation, in general, everything described above. .

The proposal was greeted with hostility by the French, who were experiencing, again, their sovereignty. At the same time, Germany was hinted that it was to someone, but not to put forward such proposals (especially since Berlin clearly wants to head one of these groups). The fact is that any military operation of the Bundeswehr must be approved by the country's parliament. Thus, there is always a risk that the decision will not be made promptly or not at all. Concerns about this point were expressed by both the United States and the United Kingdom, which generally supported the initiative of Berlin. A number of other countries, for example Spain and Slovakia, took the side of Paris, which is the leader of the “contra” group. This opposition from the French in the German media was called the "fundamental opposition."

Berlin was reminded in this regard by the UN Security Council’s vote on military intervention in the conflict in Libya, when the FRG abstained, and the frank reluctance of the Germans to get involved in the Syrian conflict. Angela Merkel, however, is difficult to condemn: the prospects for intervention in the Syrian civil war were discussed shortly before the elections to the Bundestag, and opinion polls unanimously stated that Germans more than anyone in Central and Western Europe oppose participation in the military operation to overthrow Bashar al-Assad, and no chemical weapon they are not persuasive.

By the way, the participation of the Bundestag in making military decisions complicates the situation also due to the fact that the future ruling coalition in the Federal Republic of Germany, apparently, will consist of conservative Merkel and their eternal opponents - Social Democrats from the SPD, who came to the finish line second . This means that the left will receive in the government a substantial number of seats, including, as is usually the case, the chair of the Foreign Ministry. At the same time, the socialists, unlike the conservatives, are far less compliant on issues of military intervention in the affairs of third countries. That is, a significant part of the ruling parliamentary coalition, on which the government relies, will consist of pacifists.

All this visibly spoils the mood of the Minister of Defense of Germany, Thomas de Mezier, who, due to coalition negotiations, was forced to miss the first day of the summit in Brussels, thereby hoisting the trump card into the hands of his French opponents. But Thomas de Maiziere, according to numerous rumors, planned not only to lobby for this reform, but also to fight for the post of NATO Secretary General. Rasmussen’s powers expire next year.

Ctrl Enter
Noticed oshЫbku Highlight text and press. Ctrl + Enter
We are
Situational analysis of the death of the MH17 flight (Malaysian Boeing 777), made on the basis of engineering analysis from 15.08.2014NATO: apply to the Afghan army
51 comment
Information
Dear reader, to leave comments on the publication, you must to register.