China has created a "pirated" copy of the Su-33 fighter, having guessed the secret Russian technology 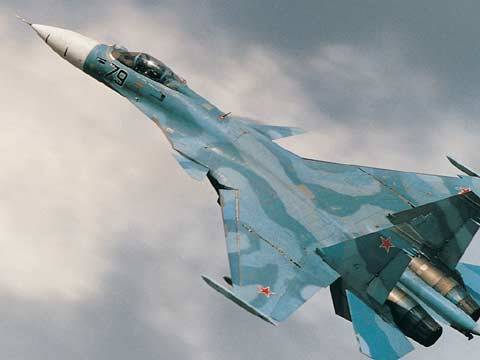 Shenyansk aviation Chinese Corporation has created a copy of the Russian carrier-based Su-33 fighter. The model is called J-15 (Jian-15), Interfax reports with reference to the May issue of the authoritative military publication Kanwa Asian Defense, which is published in Canada and Hong Kong.

The prototype T10K of Soviet times, which went to China from Ukraine, was taken as the basis for the Chinese fighter. Earlier, Chinese engineers could not solve the problem of the folding wing of carrier-based fighters, but now this problem has been solved.

It remains unclear whether the new aircraft made the first test flight. After the factory tests, the fighter will be sent to the Air Force center in Yangljan, since the Chinese Navy does not have its own test center for naval aviation.

Earlier, Beijing tried to buy two Su-33 aircraft from Russia in order to consider the model’s flight characteristics in more detail, but Moscow refused to sell, fearing a leak of technology and remembering the situation with the J-11 aircraft, RBC writes.

Recall that Russia, wanting to enter the Chinese arms market, handed over to Beijing a "screwdriver" assembly of Su-27SK fighter jets, but this step did not justify itself. As a result, China discovered the technology, upgraded the aircraft and began to establish mass production, calling it J-11. Thus, China can press the Russian Federation out of the arms market of third countries, experts suggest.

Russia began shipping Su-27SK to China in 1992 year. Then an agreement was concluded on 76 fighters of this class, and in 1995, the Russian Federation sold the license to manufacture more 200 aircraft. Since 1996, under the name J-11, they were built in Shenyang using Russian components.

By 2003, Russia has supplied 95 kits for J11, China hasn’t signed the contract yet for 105. Officially, the Chinese side explained the unilateral withdrawal from the agreement to the limited combat capabilities of the aircraft. Gradually, the proportion of Chinese components began to grow and eventually reached 90%. Already in 2007, China demonstrated the first prototypes of the J-11B model - an almost complete copy of the Su-27СМК.

At the moment, China has established mass production of J-10, J-11 and FC-1 fighters, which are replicas of the Russian Su-27 / 30 and MiG-29. In the near future, the PRC intends to build and sell at least 1200 fighters at prices lower than the Russian “originals”.

Characteristics of the Russian Su-33

Su-33 is a fourth-generation carrier-based fighter and is in service with the Russian Navy since 1991. The first flight of the fighter, developed by the Sukhoi Design Bureau, took place in the 1987 year. With 1992, the factory in Komsomolsk-on-Amur began mass production.

Su-33 is designed for air defense of Navy ships from enemy air attack weapons. Made under the scheme "triplane" with the front horizontal tail mounted on the wing inflow. The fighter is also equipped with a folding wing and a stabilizer. Introduced a system of refueling in the air with the produced fuel receiving rod.

Armament Su-33 includes a built-in gun, anti-ship missile "Mosquito" and air-to-air missiles. The aircraft is equipped with a powerful sighting system consisting of a radar station and an optical-location system, which allows the enemy to attack the aircraft in full radio silence mode.

In the cockpit are flight-navigational instruments that allow to perform flights and combat missions in all weather conditions. Information is displayed on the background of the windshield. On the plane used helmet-mounted targeting system type NSTS-1. This system carries out the seizure by homing heads of the target, which is aimed at the reticle mounted on the pilot's helmet.

The aircraft has no analogues among foreign cars and significantly exceeds the P-14 and P-18 fighters - the main carrier-based fighters of the Navy and the US Marine Corps.