Armed forces will provide the Olympics with champions 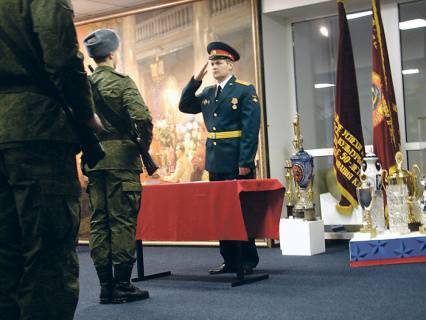 On Wednesday, October 16, exactly at noon, solemnly took the oath of the replenishment of the sports company stationed in Balashikha near Moscow. This happened in the most appropriate place - the Museum of Sports Glory CSKA. Portraits in oil and bronze busts of great athletes looked at the fighters in camouflage with machine guns in the "chest" position. At the same time, recruits of three more sports companies swore allegiance to the Motherland - in St. Petersburg, Rostov-on-Don and Samara.

Just two days before, 25 recruits-athletes were called up by the military commissar for the Tverskoy district of Moscow. They were sent to serve in a sports company, which is deployed in the most suitable place - to the Center for Special Physical Training and Survival of the FAU of the Ministry of Defense of the Russian Federation CSKA, located in the city of Balashikha.

After the medical examination and receipt of the form immediately without swinging, they began to enter military service. The next day was already at the shooting range. Now, when the conscription service lasts only 12 months, the course of the young fighter is mastered very quickly.

Under the direction of the commander of the sports company - Senior Coach Captain Sergey Sokolovsky, Senior Coach - Chief of the CSKA Racing Sports Team Tahir Habibulin and Honored Worker of Physical Culture of the Russian Federation, Senior Instructor of the CSFPV CSKA Alexander Belov recruited the learned knowledge into practice. Shot from a prone position from the Aksu. In body armor and helmet. For almost all of them, these were the first shots in life — three sighting shots, three scoring shots. Shooting from a short-barreled AKSU at the target is not so easy. Nevertheless, two privates shot out to "excellent." One knocked out 26 points from 30, the second - 25.

On oath, the military clearly carried out all the drill techniques. I could not even believe that they served only the third day. The solemn act ended with photographing of each soldier separately at the CSKA banner. For the future demob album. They are now officially not only allowed, but also recommended the military authorities to take care of filling with photos.

I then asked the company commander - the head coach of the captain Sergey Sokolovsky, whether the athletes are different from the usual draftees. It turned out very good. “First, they are disciplined,” answered the captain. - Secondly, everyone grasps literally on the fly. Physically prepared perfectly, naturally. "

On the chest of Sergei Sokolovsky icon master of sports. Tightly knit figure and characteristic walk of a weightlifter. It turns out, really engaged in kettlebell lifting, sambo and several other types. But not only therefore appointed. In addition to the military school, he also graduated from the Institute of Physical Education. So he is a coach, not only by position, but also by profession. True, the responsibilities of the company commander so much that official activity leaves little time for anything else.

Naturally, I asked another question that worries all soldiers moms: “How is it fed?” Moreover, athletes have their own diet. It is clear that at the training camp, and mainly the service will consist of them and competitions, each soldier will have an individual menu, compiled with the participation of sports doctors. And in the military unit ration, as in the usual garrison. Give all that is necessary.

The sports company consists of three platoons and two teams in team sports. Teams now mainly consist of professional contract soldiers. Among the autumn recruits are three masters of sports of international class. There are two champions: Anton Vorobyev - a road cyclist, world champion in the individual race and Felix Khalibekov - the current champion of Russia in weightlifting, the winner of the European Championship and the 27th World Summer Universiade in Kazan. Recruits represent 16 Olympic sports, including freestyle, figure skating, snowboarding, short track, curling, athletics, judo, boxing, paddling and canoeing.

RETURN OF THE WINNERS

Reserve Colonel Vladimir Lukashov was appointed head of CSKA in July of this year. He talks about the years of sports work:
- From 2001 to 2008, I was the chairman of the sports committee of the Armed Forces of the Russian Federation. And in the sports committee since 1994, exactly the period when we entered into SIZM.

Here it is necessary to clarify: TISM - CISM (Council International du Sports Military) is the International Council of Military Sports, uniting the soldiers-athletes of 133 countries. Exists since 1948 of the year. Since 1995, every four years, in the image and likeness of the Olympic Games, the World War Games are held, in which only military personnel participate.

“And in 1995, the Russian delegation went to the first World War Games,” Vladimir Nikolayevich continues. The first games with us went to the Minister of Defense Pavel Grachev. It was such an attitude of leadership. World Games were held in Rome. The leadership of the Ministry of Defense attached such importance to the participation of the Armed Forces national team in these games. Such was the support. World Games were held in Rome. And we - the representatives of the country, which, only in XNUMH, entered into SIZM, won, as they say, for a clear advantage. Only gold medals we took 1991. Italians won second place with 62 gold, Chinese - with twelve - third. Through 22, in 4, the games were in Zagreb. And in the same way, we were the first, the Chinese - the second. The third was Germany.

In 2003, in Catania, in Sicily, we were the first with great difficulty. Before the final fights of the boxers, we did not know who would be the first, because the Chinese were ahead of us by three gold medals. I came there just for boxing, because for the first time I lost to the Chinese. We all know the famous Olympic champion Alexander Lebzyak was the head coach of the Armed Forces. And Sasha Lebzyak said: “Vladimir Nikolayevich, do not worry. I have six people in the final. Six will be gold. " I told him: “I don’t need six, you at least win four”. Indeed, six failed. Our first finalist comes out and loses. I say: “Sasha, what are we going to do?” He: “Next we have middleweights and heavyweights, knockouts will be.” And indeed, he kept his word. Against a knockout, biased refereeing is powerless. And we are two gold medals ahead of the Chinese in 2003 year.

The representative of the Chinese national team, a four-star general, approached me and, through an interpreter, said that the next time in Hyderabad in India they will definitely be the first, Russia will be the second. “Why do you think so?” “We will work.” "So after all, we will work!". They hoped for climatic conditions - China and India are close by. But in Hyderabad was the same as before. We were the first, the Chinese - the second.

In 2011, the national team of the Armed Forces of Russia did not go to the World Games in Brazil. The following World War Games will be held in 2015 in South Korea. Here we are preparing to win them.

In the Museum of Sports Glory CSKA soldiers-athletes should see that the Armed Forces up to a certain point were the foundation of all Soviet and Russian sports. The revival of sports mouths is one of the ways to return the highest achievements of sport. Now it is necessary to return to the former army sport. That is what CSKA is doing under the guidance of tireless Vladimir Lukashov. His slogan is simple: we have always been, are and will be the strongest in the world.

To all the interesting question about the prospects of the Sochi Olympics answers:

- I do not like predictions. As the head of CSKA, I am doing everything that depends on me, I will do my best to ensure that our athletes perform successfully at the home Olympics. I would like, of course, that they were the first, we will try. The main thing for us now is that the vector of the attitude of the leadership of the Ministry of Defense to sports in the Armed Forces has changed. We will do everything to be the best again.

- With the Olympics, everything is clear. And what is the situation with sports in military garrisons? - I ask a question.

- Now this is very important. I have experience in working with young people, and now we have the opportunity to combine top-class sports and work with pre-conscripts. With physical education, it is children from military families. For I have always believed and believe that the physical culture and sports of the highest achievements are inextricably linked, these are two successive stages. In accordance with the decision of the Minister of Defense, sports and recreation centers are being built - fitness centers and sports halls for training in remote garrisons. We were assigned the task of First Deputy Minister of Defense: in the garrisons we are actively developing military-applied sports.

- Probably, it is difficult to lure a trainer to a remote garrison?

- With coaches, the most interesting, no problem. We have the Military Institute of Physical Education. Now it is a branch of the Military Medical Academy, but it works independently. And there instructors are trained just for garrison sports complexes. In the year produced about 30 people. This is still quite enough. In garrisons, as a rule, there are chiefs of physical training and sports. These are also graduates of our university. And they lead sections on sports. The main thing - need a material base. There will be sports facilities - children will be engaged.

- Another relevant question for me. At one time, military tourism and mountaineering were very developed. How are things now with this, especially since mining units have been created?

- As such, now there is no military tourism. Former tourist bases are now engaged in sanatorium-resort treatment. And I, as the head of CSKA and a specialist in the field of physical training, will say: tourism must be revived without fail. This is one of the sections of physical culture. Healthy people who like outdoor activities are engaged in tourism. And we have a lot of military personnel who do not need a sanatorium. They just need camping, songs around the campfire and everything else. Families of military personnel, and not only, also want to do this. It is necessary to create conditions for them. And for this it is necessary that there were tourist bases, so that there were appropriate instructors.

I think that the head of CSKA, Vladimir Lukashov, will succeed. Vast experience, energy, passionate desire to make Russian sport the first in the world, dedication - with such qualities you can move mountains. In parting words to young soldiers who took the oath, Vladimir Nikolayevich said very important and true words:

“From this moment you become soldiers of the Fatherland, soldiers of Russian sport! CSKA is a unique club, and you will play under its banner. Vyacheslav Fetisov, Vladislav Tretyak, Irina Rodnina, Alexander Lebzyak, Mikhail Mamiashvili, Aliya Mustafina and many others served and trained here. I am sure that with honor you will carry the high title of Defender of the Fatherland and continue the sporting traditions of CSKA with dignity. ”

Ctrl Enter
Noticed oshЫbku Highlight text and press. Ctrl + Enter
We are
Commentary on A. Petrov's interview “Fire and Tactics in the Russian Army: Another Look”Saratov club "Patriot": not to be afraid of the enemy and love the Motherland
26 comments
Information
Dear reader, to leave comments on the publication, you must to register.