The soldiers have the wrong system 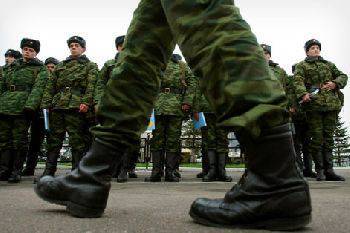 The number of crimes committed by servicemen in 2010 decreased, the head of the Chief Military Prosecutor’s Office (PRT), Sergei Fridinsky, said on Thursday. However, he said that the number of violent crimes in military units is growing. The prosecutor’s practice confirms that this is due to an increase in the recruiting contingent and serious omissions in the work of individual commanders. Experts believe that the violence in the barracks not only became more, but it also acquired new forms.

According to Fridinsky, the motives and nature of such offenses have changed.

“Bad habits and practices of the street with each new call come to military groups,” said the military prosecutor. - Increasingly, their colleagues extort money, take away their mobile phones, which is often accompanied by physical violence.

In the military, the head of the GWP, as well as society as a whole, says, there are problems associated with religious intolerance. At the same time, some destructive forces are trying to provoke conflicts in the army, including on ethnic grounds.

The head of GWP pointed to the need to take effective measures to prevent nationalist and other extremist manifestations in the military environment.

Fridinsky also stressed that “the situation in different power structures was ambiguous: while in the armed forces and internal troops, crime decreased, the number of criminal acts in parts and formations of the border service of Russia increased.”

Recall that February 15 gave similar data to the head of the Supreme Court of the Russian Federation Vyacheslav Lebedev at a meeting of chairmen of regional, regional and republican courts. According to him, last year the number of criminal cases of so-called draft dodgers considered by military courts was significantly reduced, while the number of criminal cases related to violation of statutory rules for relations between military personnel without their subordination increased by one third.

Coordinator of the public initiative “Citizen and Army” Sergey Krivenko notes: “Now we are fixing that such a form of hazing, as dictated by and forcing old men to recruit, has actually collapsed. But violence has taken on other forms. ”

Experts say that where officers keep order there are no such phenomena. But emphasize that the reason for such negative trends, most likely, was a change in the system of recruitment of the army. The reduction of the service life to one year has led to the fact that now almost half of those whom they have called are considered to be old-timers.

We should not forget about the reduction of educational officers in the army, which also influenced the growth of violence. The comment of Denis Gutsko, a well-known modern writer who recalls his army experience, says: “From my experience I can say that most of the problems in the army are due to the laziness of the officers. I also saw divisions in which there was terry hazing, and divisions in which there was none at all. In one unit, the officer was indisputable authority for the soldiers. In the other - the foreman, a huge guy, did not allow bullying. In the same place where hazing thrives, a loafer officer usually assigns his duties to senior servicemen or to some cohesive, often ethnic group. Well, as a result, in the subdivision of external order and only. "

Experts say that there is no recipe for quick treatment and hazing, and there are no crimes in the army. However, they unanimously emphasize that everything in the army must be held up by honest officers, for whom the army is a vocation. There are still a lot of them, but corruption and bureaucracy interfere with their promotion.
In addition, it is clear that the army is just a slice of society and it is impossible to cure one alone.

The jump in hazing with the transition of the army to a one-year call is indeed marked. Despite the reduction of many units, the reorganization of divisions into brigades and the reduction in the number of soldiers required by conscription, the country faced another difficulty: if earlier, when conscripts served for two years, during each call it was necessary to recruit, for example, 150 thousand people, now this figure has doubled accordingly.

Therefore, it turns out that the half of the draftees, who came in the spring, already consider themselves "grandfathers" in relation to those who came in the fall. Previously, "grandfathers" was about a quarter, now half. And the order remained the same. Don't go anywhere. Thus, the increase in the number of "grandfathers" has caused the growth of hazing.
The army again turns into a workers' and peasants. Wealthy parents do their best to save their children from the service. The low level of education also affects the habits of the people who come to the armed forces today.

In addition, it is important to understand that the guys at the age of 18 years are in themselves conflicting. It is foolish to expect that hundreds of healthy men, put together, will easily get along with each other. Everyone has their own habits.
All these people need to be brought up, united, forced to understand themselves as servicemen. Here a big role belongs to the commanders: officers, sergeants.

However, after the reform carried out by the Ministry of Defense, more than 200 thousands of officers were simply dismissed. Now the country's president says that 70 thousands of them need to be returned. It turns out the troops need them. But few will go back now.

Few in the army and intelligent sergeants. The level of education of non-commissioned officers, as well as in general draftees, is very low. During Soviet times, the sergeant was trained for one year, and he served for another two years. Now we have reached the point that sergeants are trained for three to six months, and he then serves for six to nine months. During this period, it can only be taught to shoot and drive a car.

But you can also teach a bear to shoot, and you cannot make a squad leader out of it during this time. What kind of authority among subordinates.

The salary of sergeants serving under the contract differs little from region to region and is approximately 12 thousand rubles. In many cities, the wives of such servicemen earn thousands of 18 and ask a reasonable question: why does their support and hope get so little by disappearing in service.

Therefore, contract servicemen with sergeant posts leave. So it turns out that there is no one to bring up recruits.