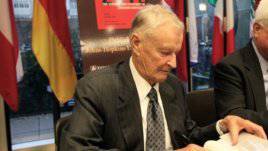 Zbigniew Brzezinski and in his eighty-five remains one of the most active and sought-after American analysts. And at the same time - one of the most acutely discussed characters on the Washington political scene. For many years now, Brzezinski has been fond of provoking heated discussions - and considers the nickname given to him as a compliment - “fighter”.

In the recently published collection of articles devoted to his long career (“Zbig: strategy and art of state management from Zbigniew Brzezinski”) he is called “a man whose opinion is heeded.” The former national security adviser to President Carter (in total, Brzezinski had to communicate with five presidents), he continues to lecture, write books, appear on television, and over the past seven months also share his opinion on Twitter (@zbig).

Speaking to the audience, Zbigniew Brzezinski complained that today there is a high risk of presidential candidates who have little knowledge of foreign policy. According to a veteran of American diplomacy, the knowledge of Barack Obama was a pleasant surprise for him. In his opinion, Obama had a clear understanding of the complexity of the tasks facing him, but he could not use the positive impulse with which he came to power in order to achieve real results. “The president’s calendar ... is quite compressed,” stated Brzezinski, “he has little time to achieve his goals, outline priorities, mobilize public opinion. President Obama’s speeches demonstrated a clear understanding of the tasks before him, but they were not implemented - including due to distractions in domestic politics. ”

Zbigniew Brzezinski is convinced that one of the current problems of power is the lack of strategic planning (in the past it was a given), and at the same time the ignorance of society in matters of foreign policy. According to Brzezinski, this is largely due to superficial coverage of foreign conflicts in the American media. In his opinion, there are enough talented analysts in the USA - but the White House should set the tone for their work: set tasks clearly, adhere to consistent policies, and be extremely careful in all that relates to intervening in crises abroad. “The consequences of excessive intervention can be catastrophic,” Brzezinski warns. - We have not won in Korea, in Vietnam, have not won in Iraq and have not won in Afghanistan. I think that the United States did the right thing by refraining from a military action in Syria: as a result, even Russia and China understood that the regional explosion that might occur there is not in their interests. As for talking about the attack against Iran, additional unilateral actions can be dangerous for our interests. ”

According to Brzezinski, the United States has lost the position of “global dominance”, which in principle is impossible in today's world. “For thirteen years after 1990, we were a superpower, and everyone recognized that,” said the politician. “But we are no longer in that position, and it is unlikely that we will restore it: we will no longer be as omnipotent and unique as twenty years ago — in any case, not during the lifetime of those who are present in this room.” But we can make the most of our opportunities if we behave intelligently. We, as a country, need to understand that the world has become incomparably more complex, potentially much more dangerous. More partners are not allies, but countries that share our interests at least partially, this is what will be needed in the coming decades. ”

To the question of a student from the audience: what should be the focus of attention in the study of international relations today? - Brzezinski replied that the world today is much harder than anything that had to be studied in this area in the past. “The world will be more anarchic - therefore we must understand: when to interfere, and when not. Restraint and collective response are the best course, ”said a veteran of American politics.

Recently, a sharp debate has been going on in the US regarding the legality of using American drones in other countries to destroy terrorists. Human rights organizations - Amnesty International and Human Rights Watch - claim that much more innocent people die during attacks than US authorities recognize. Brzezinski believes that the use of drones is “extremely efficient,” but he is concerned about the lack of a mechanism for tracking the damage associated with these operations, both in the Pentagon and in the White House. “From a political and moral point of view, this is unacceptable,” the politician is convinced.

In one of the articles included in the collection, an interview was posted, which Professor Charles Gati took from Brzezinski. The future of Russia is estimated in an optimistic interview. As an illustration of his thesis, Brzezinski cites the fact that a documentary (sponsored by Boris Berezovsky), in which responsibility for the bombings of residential buildings in Moscow in the autumn of 99 was placed on special services, was shown in three Moscow cinemas.
“The return of fear will require tremendous efforts that may be beyond the capabilities of Putin,” the politician believes.

Former US Secretary of Defense Robert Gates, who also spoke at the conference, expressed a different opinion. “I had a period of hope ... when Medvedev was president,” Gates said. - He understood the problems of Russia, understood that connections with the West are necessary. It seems to me that Putin is all in the past: a lost empire, a past glory. ”

The former head of the Pentagon did not hide his skepticism about the deal with the regime of Bashar al-Assad over the destruction of the Syrian chemical weaponshowever, he praised Putin’s “maneuver, who left Assad in power and raised Putin’s prestige”.

According to Gates, one of the main problems of today's politics in the United States is the growing gap between the representatives of the two parties and a decrease in the number of professionals who are respected by both Republicans and Democrats. “When I left my post in June 2011,” the ex-minister continued, “I was the last high-ranking official who served in both republican and democratic administrations. Previously, there were more such people. Today, young people early identify themselves with one or the other, and when the administration changes - they go to research institutions, and then - with the next change of power - they return to state structures. ”

Addressing the Iranian problem, the conference participants stated that it was not easy to predict the outcome of the current dialogue with Tehran.

"Iran has undoubtedly changed its tone, but it is difficult to predict whether this will lead to a change in the political course," Gates said.

Madeleine Albright noted that when the President of Iran became Khatami, "we thought that something would change." “I decided,” Albright continued, “that we will lift the sanctions on carpets, pistachios and caviar. The Iranians had a wonderful sense of humor: when I left the post (Secretary of State) and could accept gifts, they sent me carpet, caviar and pistachios. ”

“We thought that Khatami would bring about change, but he could not,” said Stephen Hadley. - The Iranian system was upset. When the Iranian president was ready for a deal, the Supreme Leader destroyed it. Now in Iran, the president (Rouhani), who shares the views of the supreme leader, is at least prepared to allow him to negotiate with the West in order to see what will come of it. The only way out is to check it in practice and see what happens. ”

Brent Scowcroft urged those present to consider the Iranian nuclear program in a broader context. “If the Shah (Mohammed Reza Pahlavi) were alive, it is possible that he would have taken the same position on nuclear weapons today, given Iran’s position in the region,” the general said. - When Ahmadinejad was president, the mullahs said a tough “no” about the deal regarding the nuclear program. Rouhani is more optimistic, and the mullahs are silent. But when dealing with Iran, it is important to remember in whose hands real power resides. ”

October 22: "Russia will not become a democracy until it is honest about its Stalinist past - including the katyn massacre."

October 17: “The main lesson of the“ government closure ”: getting drunk on“ tea ”is criminal!”

October 14: “The infantile position of the radicals in the House of Representatives makes allies doubt our commitments abroad, causing damage to global stability and our foreign policy.”

October 10: “By detaining a ship owned by Greenpeace, Putin behaves like Somali pirates, demanding a ransom for activists.”

October 7: “Anarchist ideologues with influence in the House of Representatives use suicidal blackmail that harms our national interests.”

October 2: “Long-term agreements with the Soviet Union on nuclear weapons demanded a compromise, but not one-sided surrender. Lesson for Iran? "

September 28: “Putin very successfully pushes away all future candidates for the Eurasian Union.

September 26: "We are at a historic crossroads: the US-Iran agreement could prevent a regional explosion."

September 16: "The progress of the US-Iranian dialogue, which will lead to an agreement, may contribute to a settlement in Syria."

September 13: “Excessive simplification - thinking that Russia and China are always at the same time. Russia's interests in Syria and the Middle East are not the interests of China. ”

September 12: "The desire for a unilateral military solution to the Syrian crisis is fraught with a regional war."

Ctrl Enter
Noticed oshЫbku Highlight text and press. Ctrl + Enter
We are
Zbigniew Brzezinski as a mirror of American devolutionWhy the West needs Russia
47 comments
Information
Dear reader, to leave comments on the publication, you must to register.