"Wild caress" - a special unit of the US Air Force

October 25 2013
35
Wild Weasels (English Wild Weasels) are special units within the US Air Force that are focused on fighting the enemy’s air defense system, destroying its radar. For the first time, these units appeared during the Vietnam War, and in the future no major military operation involving the United States Air Force could do without them. There is nothing strange in this, because by destroying or forcing the enemy’s ground-based radars to "shut up", you can ensure air supremacy and safe flights.


It was the military conflict in Vietnam that became the first armed conflict in which aviation I had to deal with a layered air defense built on the air defense system. Naturally, the presence of a significant number of Soviet-made anti-aircraft missile systems in Vietnam was an unpleasant surprise for the Americans and made them seek a way out of this situation. Among the possible countermeasures were the transition to flying at low and very low altitudes (but anti-aircraft artillery was very active at these altitudes), as well as the widespread use of interference. For jamming, special aircraft were used to break through enemy air defense.

The program to create air defense breakthrough aircraft in the United States received the designation Wild Weasel - "Wild Weasel." Over time, the airplanes themselves, which were modified as part of this program, also became known. At the stage of Wild Weasel I, which was launched already in 1965, the Americans used the F-10 Super Saber, the first supersonic aircraft of the American Air Force created on the 100 years earlier. The two-seat version of the F-100F fighter was the basis for the Wild Caress. The plane could detect the enemy’s radar using special radiation detectors, after which the officer-operator indicated the direction to the pilot, then he detected the position of the air defense missile system already in visual mode, and attacked the target. At the same time, the F-100F fighter did not have a high enough flight speed to accompany the F-4 Phantom II and F-105 Thunderchief airplanes that were modern at the time, so at the Wild Weasel II stage, a model was used that was built on the basis of the F- 105. 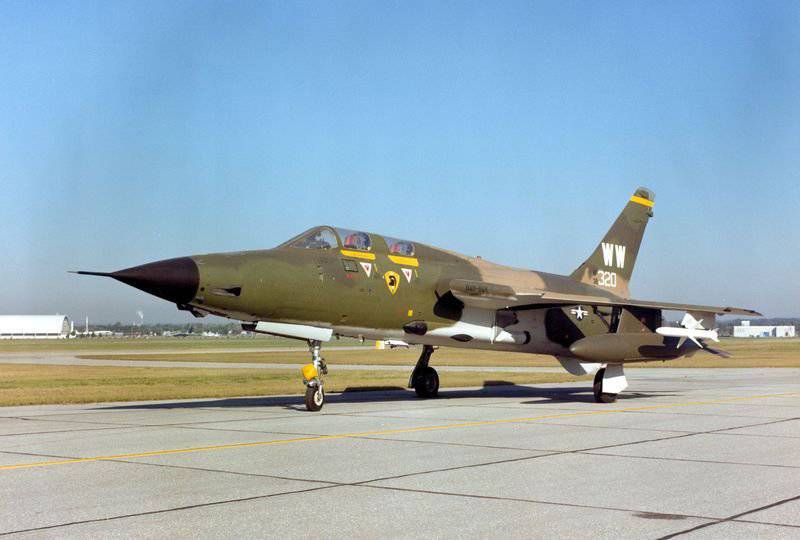 F-105G
Special aircraft EF-105F began to appear in parts already in 1966 year, soon they were replaced by more advanced F-105G. At the same time, the serial production of the F-105 fighters was completed even earlier, in the 1964 year, so the number of fighters that could be modified in the enemy's “air-defense killers” was reduced, including due to high aviation losses in Vietnam. As a result of this, the 4 and 5 stages of this program have already been implemented on the basis of the F-4 Phantom II fighter - in the EF-4C Wild Weasel IV and F-4G Wild Weasel V versions.

During the Vietnam War, the Wild Weasel divisions acted in 2 ways: they were accompanied by attack groups of American aircraft and were engaged in “free hunting”. In the case of accomplishing the task of escorting the strike groups, these planes were the first to enter the Vietnamese air defense zone and remained there during the main attack, engaging in the suppression of all identified enemy air defense missile systems. These aircraft left the area only after the impact aircraft had left it. This is how the Wild Weasel motto appeared: “First to come, last to leave” (English First In, Last Out). During the "free hunt" "wild caress" acted ligaments "hunter-killer." For example, at some distance from a single F-105F, a group of X-NUMX-3 F-4D or F-105 aircraft followed. Sometimes a group of 4 'hunters' and 2 'killers' were used. The leader aircraft found the position of the air defense missile system and attacked them, marking it for the rest of the aircraft, after which all the strike vehicles concluded their destruction.

With each new generation, the Wild Weasels were equipped with more and more sophisticated weapons and equipment, including guided missiles that are being emitted by radar, as well as electronic warfare systems (EW). After the end of the Vietnam War, “Wild caress” served in Western Europe, as well as in the Far East - in those places where, if necessary, the United States would have to deal with the Soviet air defense system. 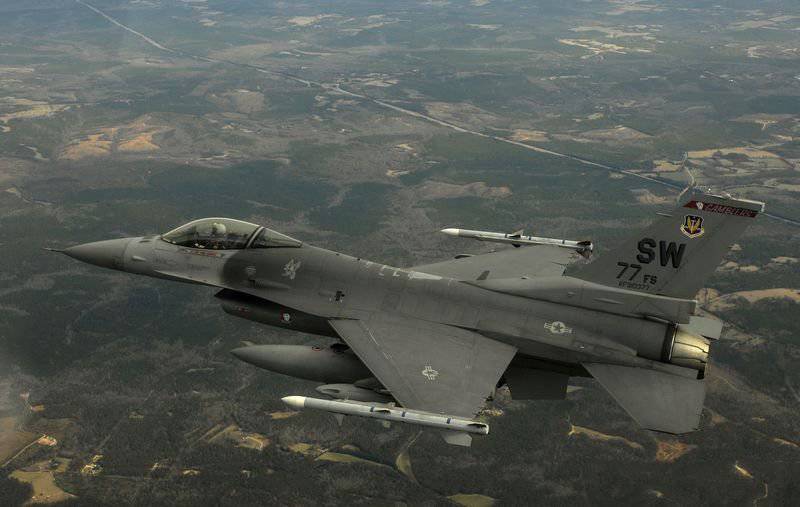 F-16CJ
In 1990, the last “Wild caress” was written off. In the United States decided to use for these purposes the upgraded multi-purpose fighter F-16C. Such a means of suppressing enemy air defenses became the F-16CJ Wild Weasel fighter. The aircraft is a modification of the F-16C Block 50 and is designated Block 50D / 52D. This fighter will be used in solving the problems of the enemy's air defense breakthrough and suppression, successfully replacing the old but reliable F-4G Wild Weasel vehicles. The F-16CJ fighter has the ability to fully utilize the capabilities of the AGM-88 HARM UR, as well as the AN / ASQ-213 HARM (HTS) guidance system to destroy and suppress the enemy’s air defense system. These US Air Force aircraft used to suppress the Yugoslav air defense in 1999 year.

Faced with the same problem, the US Navy did not abandon specialized machines. To suppress the air defense system, they used here: first the EF-10D Skyknight, then the EA-6A and the EA-6B Prowler. Currently, the American fleet is betting on specialized airplanes - the EA-6B has been replaced by the new EA-18G Growler, which were created on the basis of the two-seater version of the F / A-18F Super Hornet.

Up to 2008, the Russian Air Force did not encounter an enemy that was equipped with air defense systems more serious than small-caliber anti-aircraft artillery and MANPADS. Therefore, the five-day war with Georgia in August 2008 of the year clearly demonstrated the weakness of the Russian Air Force, and also showed that such clashes are fraught with losses for Russia. In this regard, the task of suppressing enemy air defenses has become one of the priority projects. 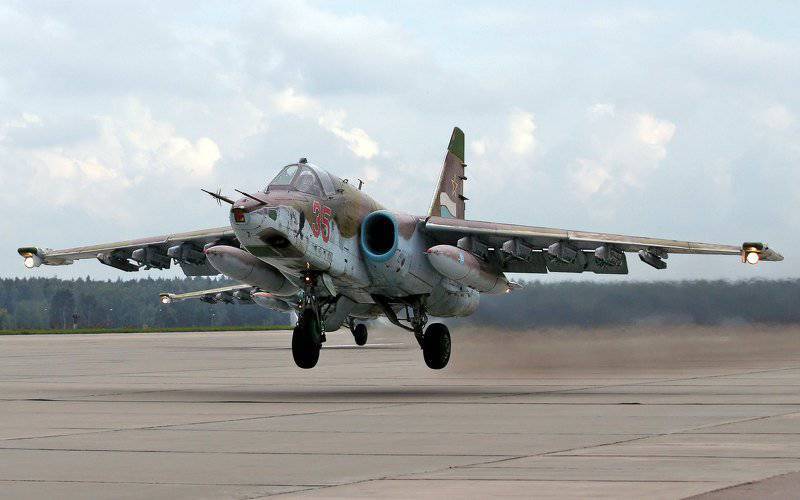 Currently, to solve this problem, if necessary, standard attack aircraft should be used - today it is Su-24 and Su-34, which are equipped with anti-radar missiles. But the capabilities of these aircraft, apparently, were considered insufficient. In addition, the supersonic reconnaissance bomber MiG-25 RB can be used as a domestic Wildlife wearer. But these planes already have a very respectable age, and in the coming 10-15 years they will be completely removed from the Air Force.

At the same time, the choice of Su-25 attack aircraft as a platform for the Russian “Wild caress” is somewhat surprising (they should appear in the Air Force already in 2014 year). Due to its characteristics and purpose, this aircraft can accompany only groups of the same attack aircraft. In order to act in combat orders of multi-purpose fighters and front-line bombers, the Su-25 lacks either range or flight speed. Along with this, for attack aircraft that operate over the battlefield, this machine can be a serious help. To solve other tasks, it might be worth thinking about developing a special aircraft based on the Su-30 or at least developing such a set of equipment (in a container version), which, together with the necessary armament, could turn any standard fighter out of the composition of the Russian Air Force.

Ctrl Enter
Noticed oshЫbku Highlight text and press. Ctrl + Enter
We are
NATO aviation against Syrian C-300ZRK C-200 rust in the woods near Moscow
35 comments
Information
Dear reader, to leave comments on the publication, you must to register.