Ejection seat: the story of appearance

October 25 2013
77
It may seem surprising to you, but the very idea of ​​bailout a pilot from an airplane appeared at the very dawn aviation along with the first Wright brothers design aircraft. At the same time, the simplest construction produced then worked, but it was almost impossible to use it on biplanes, so for a long time the pilots left the car, falling out of the cockpit. However, now special ejection seats are used for this, which from the moment of their mass appearance were able to save the lives of thousands of pilots. The ejected seat is the last chance for the pilot or other members of the crew of the aircraft (and now helicopters: Ka-50, Ka-52) to save his life in the event of an emergency on board.


At the same time, far from all aircraft are equipped with similar means of salvation. Most of them are military and sports cars. The first ejection seat in a helicopter was installed on the domestic Ka-50 "Black Shark". In the future, they began to appear on other aircraft, up to the spacecraft. In order to maximize the ability of the pilot to survive after an aircraft crash or even fall to the ground, they began to produce such ejection seats that ensure the survival of the pilot and protect him throughout the entire range of altitudes and speeds of flight.

Usually, after the ejection, the modern seat detaches itself and the pilot lands on a parachute. At the same time, the development of entire ejection capsules or cabs, which are able to independently land with the help of parachutes, is underway, and the crew does not leave the ejection module. 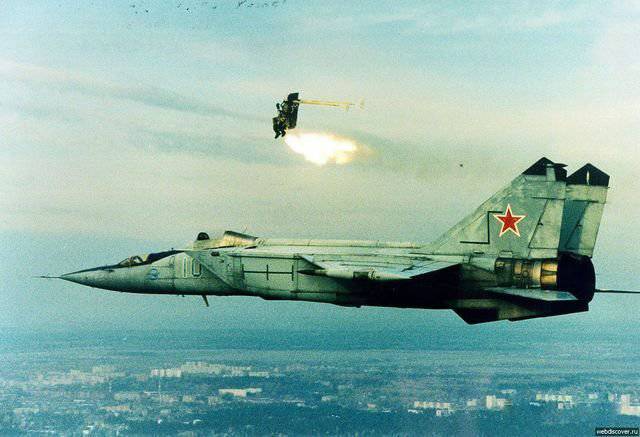 Here are just two illustrative examples from the recent past, when the ejection seats saved the pilots life. 12 June 1999, on the opening day of the 43 Paris Air Show, the newest Russian fighter Su-30MK rose to the sky to demonstrate to the thousands of viewers the machine’s super-maneuverability through the use of a controlled thrust vector.

However, the flight program could not be completed until the end: the pilot Vyacheslav Averyanov misjudged the flight altitude when the vehicle left the flat spin and later started taking the vehicle out of the dive. The fighter didn’t have literally a meter of height and the machine hit the ground with its tail end, damaging the left engine. On the right-hand engine, the already burning fighter was able to gain altitude in 50 meters, after which the pilot and his navigator Vladimir Shendrik ejected.

Making bailouts from small heights is a very difficult situation. It is considered successful if the pilot simply stays alive after that. Therefore, with great surprise, the specialists looked at the Russian pilots who had landed, who were independently walking along the field of the airfield. This made such a strong impression on the general director of the Paris Air Show, Edmond Marshege, that during his speech at a press conference on the occasion of the plane crash, he said: "I don’t know any other means that could save the crew in these conditions."
The Russian pilots were rescued by the domestic ejection seat K-36DM, created by SPE Zvezda. It would be difficult to come up with a better advertisement.

The second time this chair proved its high performance in 2009, when, in preparation for the Max-2009 air show, two fighters collided in the air - Su-27 and Sparky Su-27UB from the Russian Knights aerobatic team. All the fighter pilots managed to eject, two of them survived, although they received very serious injuries. The third pilot, the commander of the aerobatic team, Igor Tkachenko, was killed, his parachute burned out. 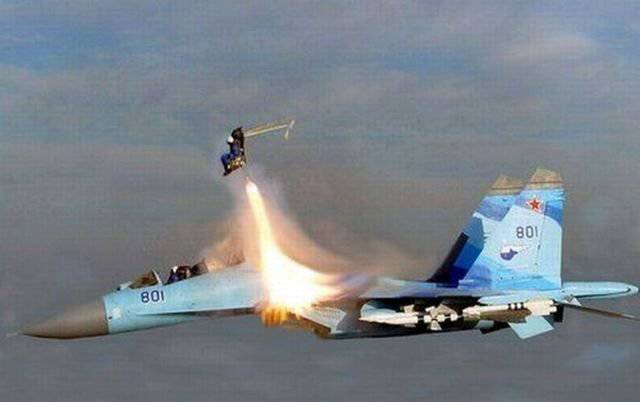 Until 30-ies of the last century, the speed of all aircraft was low and did not create a special problem for the pilot, he simply threw back the cockpit canopy, unfastened from the tethered system, rolled over the side of the cockpit and jumped. But by the beginning of the Second World War, combat aircraft had overcome the invisible barrier: with a flight speed of more than 360 km / h, the pilot pressed air pressure to the aircraft with enormous force - almost 300 kgf. But at that moment it was necessary to push off as much as possible in order not to hit the wing or the keel, and the pilot could already be wounded, and the plane itself was badly damaged. The simplest solution is to unfasten oneself and then move the handle forward so that the plane “pecks” and threw the pilot out of the cockpit under the effect of overload - it did not always work, only at low speeds.

The first special ejection seats were produced in Germany. In 1939, the experimental Heinkel 176 rocket-powered aircraft was equipped with a drop nose, and soon the catapults became serial. They were put on a turbojet He 280 and screw He 219. In this case, the night fighter He 219 became the world's first serial combat vehicle, which received ejection seats. 13 January 1943 of the year German pilot Helmut Schenk made the world's first real bailout - the aerodynamic surfaces of his fighter iced over and the plane became uncontrollable. By the end of World War II, German pilots had already counted more than 60 real bailouts.

The ejection seats of those years are attributed to the first-generation seats, although this classification is arbitrary. They solved only one problem - to throw the pilot out of the cockpit. This was achieved through the use of pneumatics, although there were also pyrotechnic and mechanical (spring-loaded levers) solutions. Taking off from the plane, the pilot had to unfasten the seat belts, push the seat away from him and open the parachute - that is still extreme ...

The second generation of ejection seats appeared after the end of the war in the 1950-s. In them, the process of leaving the aircraft was already partially automated: it was enough to turn the lever so that the pyrotechnic firing mechanism would throw the seat with the pilot out of the aircraft, the parachute cascade (stabilizing parachute, then the braking one and the main one) would also be introduced. The use of the simplest bar-time automatics made it possible to provide only a height lock (at a high flight altitude the parachute did not open immediately) and in time. At the same time, the time delay was constant and could provide the best result for the pilot to save only at the maximum flight speed. 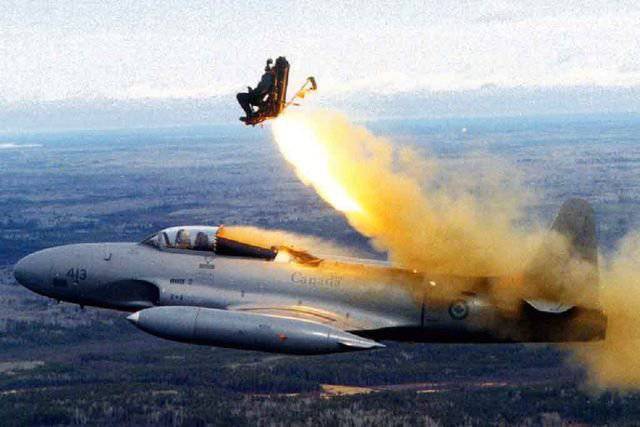 Since only one firing mechanism (which was limited by the cabin's dimensions and the pilot's physiological capabilities for portable loads) could not throw the pilot to the required height, for example, while the aircraft was parked, in the 60 of the last century, the ejection seats began to be equipped with the 2. - a solid rocket motor, which began to work after the armchair left the pilot’s cabin.

The ejection seats equipped with such engines are usually referred to the 3 generation. They are equipped with more advanced automation, while not necessarily electric. For example, on the first models of this generation, created in the USSR, Zvezda Scientific and Production Enterprise, the KPA parachute assault rifle was connected to the aircraft using 2's pneumatic tubes and thus tuned to the altitude and speed of flight. Since then, technology has made a huge step forward, but all modern mass-produced ejection seats belong to the 3 generation — the American Stencil S4S and McDonnell Douglas ACES II, the British Martin Baker Mk 14 and the famous Russian K-36DM.

At the same time, it is worth noting that quite a lot of companies were initially represented in this market, but over time only American Stencil and McDonnell Douglas, as well as the British Martin Baker, remained in the West. In the USSR, and then in Russia, the ejection seats, like other flight gear, starting from the 1960-s, are being manufactured by the Zvezda Scientific and Production Enterprise. The unification of the seats had a positive effect on the budget of those who exploit military equipment (especially if there are more than one type of aircraft in service, but several at once).

Russian ejection seat K-36DM is the best of its kind, it is a very complex system that has no analogues in the world. What is the uniqueness of the Russian approach to the rescue of pilots? Today, the late chief designer of Zvezda Scientific and Production Enterprise Guy Severin answered this question in the following way: “The cost of training a professional, well-trained military pilot is about 10 million dollars, which is up to half the cost of some machines. Therefore, from the very beginning, we thought about not only saving the pilot at any cost, as they do in the West, but also saving him without injuries, so that in the future he will be back in operation. After ejection, with the help of Russian seats, 97% of pilots continue to lift planes into the sky. ” 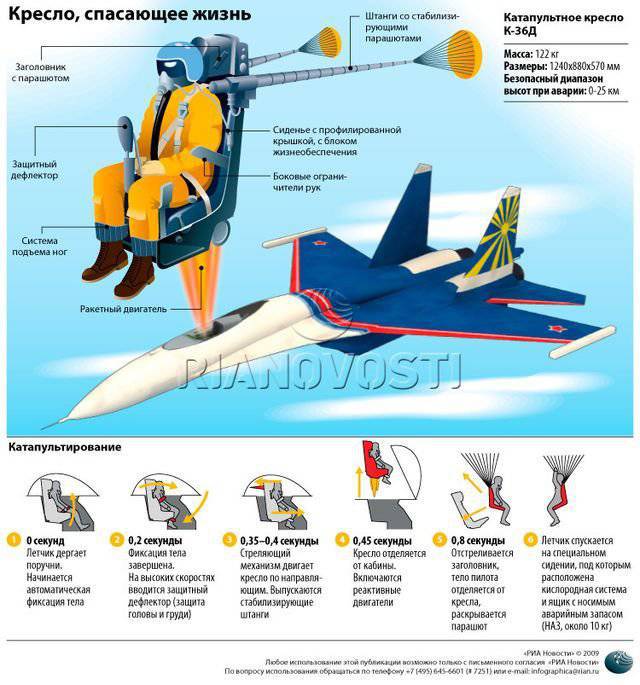 In the Russian chair everything is done in order to minimize the possibility of pilot injury. In order to minimize the risk of spinal injury, it is necessary to force the pilot to take the correct position. That is why the K-36DM mechanism attracts the pilot's shoulders to the back of the chair. The shoulders' shoulders are on all ejection seats (such belts are used even in modern cars), however, the K-36 also has a lap belt. Another degree of fixation of the chair are lateral hand guards, which provide lateral support for the pilot and additional protection.

Another dangerous factor is the air flow, which meets the pilot after he leaves the cockpit. On all the protruding parts of the body of the pilot there are enormous overloads, for example, the air flow can easily break legs. That is why all modern ejection seats are equipped with special hinges that fix the lower legs, while the Russian chair is also equipped with a leg lift system - the chair immediately “groups” the pilot (in this position reduces the risk of injury). Also, the K-36 seat has a retractable deflector that protects the pilot’s head and chest from the oncoming air flow during ejection at very high flight speeds (up to 3 Mach). All these protective mechanisms are activated without the participation of the pilot, and the cooking time takes only 0,2 seconds.

In addition, the Russian chair K-36 is equipped with special roll correction engines, which are located behind the headrest and are able to give it a vertical position. The vertical position allows maximum use of the momentum of the rocket engine, as well as gain altitude. In addition, this position allows the pilot to withstand heavy loads when braking (in the direction of "chest-back").

Ctrl Enter
Noticed oshЫbku Highlight text and press. Ctrl + Enter
We are
17 July. Birthday of naval aviation of the Russian NavyYak-141 (Freestyle). Vertical Racing
77 comments
Information
Dear reader, to leave comments on the publication, you must to register.