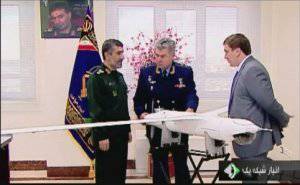 Passing to the copy of the American drone ScanEagle, commanded by the Russian Air Force Lieutenant-General Viktor Bondarev, launched into production and adopted by the armed forces, the commander of the base of the air defense of the Islamic Revolutionary Corps, Khatam al-Anbiya, Brigadier Farzad Esmaily said: “This launched UAV is a symbol of technical capabilities. and the sample that is being handed over to our distinguished guest today is a friendly gift to the Russian Air Force and the Russian people. ” In any gift made in the East, there is a hint. The “drone” transferred to the Russian side hints at how Iran sees the further development of military-technical cooperation with Russia. This “friendly hello” showed how powerful the potential lies in the Russian-Iranian friendship and what a fundamentally new level Russian geopolitical opportunities can reach.

The air force has always been at the forefront of politics. 20 June 1937, a Soviet single-engine aircraft ANT-25, commanded by legendary pilot Valery Chkalov, breaking the kilometer 8504, made the first non-stop flight from Moscow to the USA, landing in Vancouver, WA, USA. The American General George Marshall, who met them, soon became the head of the US Army, and then he was secretary of state and secretary of defense. The culmination of the historic visit of our pilots to the United States was their meeting at the White House with US President Fraklin Delano Roosevelt. At a reception hosted by the Club of Researchers and the Russian-American Institute in those days in New York in honor of the Soviet crew, Chkalov said: "Accept friendly and sincere wishes from 170 to the millions of Soviet people we brought to you on the wings of the plane." In our pragmatic times, such words are embarrassed, but the commander-in-chief of the Russian Air Force, Viktor Bondarev, with good reason could repeat them in Tehran during his four-day visit.

Proposals for a joint technological breakthrough

It is still premature to disclose the contents of the agreements reached, since the specific details of further cooperation between Russia and Iran in the military sphere still need expert refinement and coordination at the headquarters level. But talking about what was proposed by the Iranian side is quite possible. First of all, it should be noted that the Iranians more than seriously prepared for the visit of Lieutenant General Viktor Bondarev. On the eve of his arrival, the Iranian air defense exercises Defenders of the Velayat Skies-5, which took place on the territory of 5 thousand square kilometers and in which more than 700 thousand Iranian troops participated, ended. The Russian delegation was acquainted with the results of the exercises, which allowed it to obtain objective information about the state of air defense of the Islamic Republic. Well, and since almost simultaneously with the Iranian "Defenders of Heaven" the Israeli Air Force exercises were held, during which actions were worked out during flights over long distances with refueling in the air, the Russian side was also offered conclusions on the peculiarities of the Israeli actions aviation in the event of an attack on Iran.

The exchange of views on the tactical issues of the use of the Air Force quite logically led to the Iranian side proposing to conduct internships for Russian military pilots in Iran, which, according to the parties, would allow pilots of the Russian Air Force to work out skills in the Middle East, saturated with technical air defense systems of the American and Israeli production. By the way, to consider this agreement as evidence of the “aggressive plans of the Kremlin” is at least silly if only because the Israeli air force has been learning to overcome barriers from the Russian C-300 since the 2006 year, but we don’t say that Israel intends to attack Russia?

The Iranian side demonstrated the Commander-in-Chief of the Russian Air Force and the current system for monitoring the operational situation in the Persian Gulf, which is a complex set of technical intelligence equipment and the very Iranian copies of the American ScanEagle, one of which was transferred to Russia.

Today, an Iranian copy "works" at a distance of 1200 kilometers with 24-hour flight mode. At the same time, if necessary, it can be equipped with everything necessary for delivering a high-precision rocket-bombing strike. As already mentioned, any oriental gift carries at least one hint. In the case of the Iranian copy of ScanEagle, there was actually no hint. There was a direct offer to the Russian side to take part in the modernization of this drone and the joint Russian-Iranian production. This proposal is more than relevant in the conditions when Azerbaijani drones, created using Israeli technology, are already beginning to fly around the Caspian Sea, and in the future are preparing for "ensuring the safety of the Caspian oil pipelines."

Discussion of the issue of Russia's participation in the modernization of a number of Iranian types of aviation and rocket technology was, perhaps, the key event of the visit. In addition to the urgent need to modernize the MIGs that are in service with the Iranian Air Force, Russia received proposals for joint projects in the helicopter industry, rocket production and the development of technical intelligence systems. Iran has made it quite clear that it offers Russia a fundamentally new level of military-technical cooperation - joint research and development work, which until then had only been conducted with China by China. During the discussion of these issues, the topic of the fate of the ill-fated C-300 contract received an unexpected development. The Iranian side made it clear that, of course, it would not refuse to purchase the Antey-2500 air defense system, but at the same time it offered Russia to participate in the modernization of the already existing Iranian S-200, which, in fact, are a copy of C-300PS acquired by Iran from Russia in 1993 year.

About some political nuances, external and internal

Of course, making these proposals, the Iranian side took into account all the specifics of both Russian-Iranian and Russian-American relations, and therefore a dialogue of diplomats took place simultaneously with the military dialogue. Sergei Ryabkov, in agreement with the Iranian side, slightly lifted the veil over the Iranian position before the upcoming second round of the Geneva talks held last week. Iran is ready to suspend uranium enrichment to 20% and seriously limit the amount of 5% enrichment. In fact, this removes the main claims to the Iranian nuclear program by the EU and the US and is sufficient reason to lift the unilateral sanctions. And consequently, some of the obstacles to Russian-Iranian military-technical cooperation are being removed, in which not only Iranian, but also the most sensible Russian authorities are interested.

It would be unfair to keep silent about the domestic Russian political aspect of the visit of the Commander-in-Chief of the Air Force to Iran. The Russian government is soaring in the transcendental heights of libertarianism and monetarism, simply ignoring Iran as a trading partner. For our Siluan and Dvorkovich "the sun rises in the West", and therefore Russian foreign economic cooperation, as well as Russian foreign policy, they imagine only and exclusively in close ties with Western partners, and under any, sometimes quite humiliating conditions for Russia. The fact that the Russian geopolitical presence in the East gives a chance to Russian re-industrialization in no way fits their heads, since in these heads there are only sectarian dogmas of the “liberal economy”. With their desire to reduce all non-core assets, from the social sphere to the army, they generally do not need the Russian presence in the East, and it does not fit. Walling about the deficit of the Russian budget, they see ways to fill it either in foreign borrowing or in increasing taxes on the population. They are not talking about making money by developing their own military-industrial complex, because the development of industry to extract profits from military-technical cooperation is “higher mathematics”, and the mathematical apparatus of “effective managers” in the field of innovation to optimize financial flows is fixated on arithmetic - take away and share. With the advent of Dmitry Rogozin, new hopes appeared, but he was stuck with something, enough time had passed, but so far, except for media movements and public relations campaigns, nothing substantial has been done in the defense industrial complex and defense industry. Therefore, the urgent problems of the economy and security, the problems of preserving the Russian presence in the markets of the East are forced to be solved by the security forces, so despised by domestic libertarians.

The visit of the Interior Minister Kolokoltsev to Iran ended in a breakthrough in matters of cooperation with the Islamic Republic in the field of public security. The visit of Bondarev created a powerful foundation for securing Russia on the Iranian segment of the arms market and R & D cooperation. Apparently, visits by Dmitry Rogozin, Sergey Shoigu and Alexander Bortnikov are necessary in order to resolve issues of cooperation in the nuclear industry, ensure regional security, adequately respond to new challenges, develop the infrastructure of the Caspian ports and similar “trifles” that are necessary from the point of view national security and which can bring tens of billions of dollars to the Russian budget. The most interesting thing is that law enforcement officials are fully capable of solving these issues of economic cooperation, competence and state thinking they have enough for it.

The visit of the Commander-in-Chief of the Russian Air Force, Viktor Bondarev, to Iran took place as soon as possible. Just at the time that he was in Tehran, the British government announced its readiness to resume with the Iranians the development of the Ram gas field Rhum, which is 390 kilometers northeast of Aberdeen. The joint development (50 at 50) of BP and the Iranian Oil Company Limited, a subsidiary of the National Iranian Oil Company, has already invested million dollars in the development of this largest yet undeveloped field in the North Sea, but due to joining the anti-Iranian EU sanctions in 564, the project was frozen. Now the situation has changed, and the British government, apparently, does not intend to wait for the decision of Washington regarding the lifting of sanctions. The "swiftness" of London, however, is more than understandable - a return to the Iranian market has long been perceived by European business circles as a way out of the economic crisis. The decision on "Ram" - "the first swallow", we will soon learn about the resumption of the Iranian-Germanic and Iranian-French economic projects. Under these conditions, the visit of Viktor Bondarev and the agreements reached mean that Russia has at least a chance not to be late for this tasty and extremely promising Iranian market and occupy corresponding niches that it relies on by definition.

Ctrl Enter
Noticed oshЫbku Highlight text and press. Ctrl + Enter
We are
Russian C-300 Iran will shut down missile plantsIran will be able to shoot down planes of Israel and the United States
19 comments
Information
Dear reader, to leave comments on the publication, you must to register.