October 25 2013
68
November 9 will host the launch of the new American aircraft carrier Gerald R. Ford (CVN-78) at the Newport News Shipbuilding (Newport News, Va.) The construction of the head ship of the same type began in the 2009 year and will soon enter the final stage. The introduction of the aircraft carrier into the US Navy is scheduled for 2016 year. In the future, the Pentagon is going to build two more ships of this type. 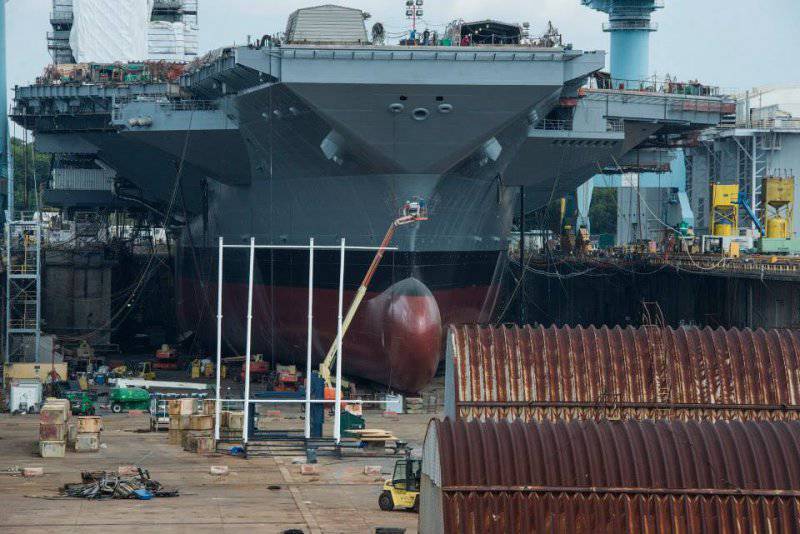 The aircraft carrier "Gerald R. Ford" is one of the most important US military projects recently. This attitude to the ship is primarily due to the fact that for the first time since the sixties, American shipbuilding has created and is implementing such a large project. Currently in the Navy, aircraft carriers such as the Nimitz were built in accordance with the project developed in the sixties. Since then, the project has been repeatedly refined before the construction or modernization of ships, but has not undergone significant changes. Gerald R. Ford type ships, the first of which will soon be launched, are being built according to a new project created in accordance with the current requirements of the naval forces.

One of the most interesting features of the new project is the approach to equipping ships with various equipment. So, in terms of size and displacement, the aircraft carrier Gerald R. Ford is almost the same as its predecessors of the Nimitz type. The ship with a total displacement of about 100 thousand tons has a length of over 330 meters and a maximum width of the flight deck 78 m. At the same time, internal equipment, radio-electronic equipment, weapons, etc. A new aircraft carrier can be considered a big step forward. It is argued that the use of a number of new systems will significantly reduce the crew of the ship, but at the same time raise the intensity of the combat wing of the wing at least 30%. The consequence of the latter will be an increase in the combat effectiveness of the ship.

The higher performance of the new aircraft carrier in comparison with those currently in operation is due to the use of two nuclear reactors A1B, designed specifically for aircraft carrying ships of the new project. If necessary, such a power plant can produce power by 25% greater than the maximum power of the reactors of the Nimitz aircraft carriers. In this case, the complexity of the maintenance of reactors is reduced by half. The A1B power plant with two reactors is the first system of this type that does not require refueling during service. New reactors are designed in such a way that nuclear fuel is enough for all 50 years during which the aircraft carrier will serve. This, among other things, increases the safety of the operation of the ship, since all radioactive materials from the moment of loading to the decommissioning of the aircraft carrier will be in an airtight volume. 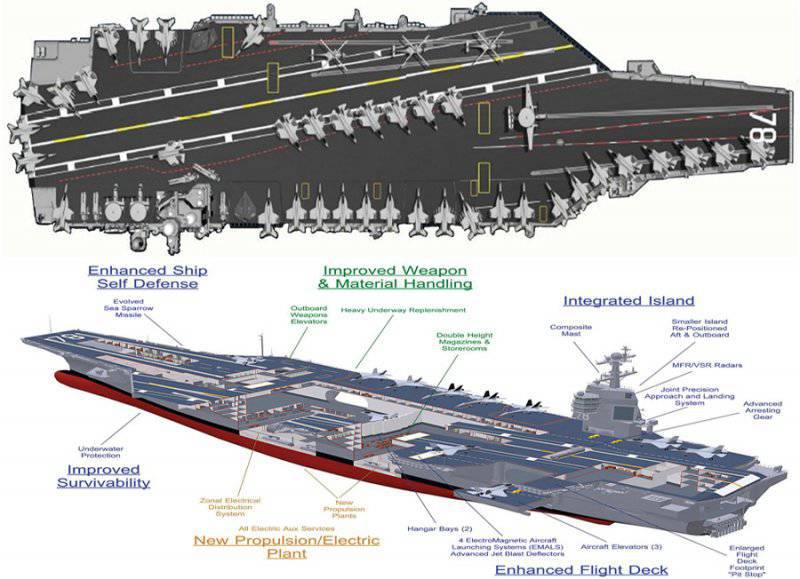 The main element of the Gerald R. Ford vehicle radio complex will be the DRB radar system. It includes the Raytheon AN / SPY-3 multifunction radar and the Lockheed Martin VSR surround review radar. Similar electronic equipment is supposed to be installed on the new destroyers of the Zumwalt project. It is assumed that the radar VSR will be used to monitor the air situation and target designation of aircraft or ships. The second radar station, AN / APY-3, is intended not only for viewing or tracking targets, but also for controlling certain types of weapons. 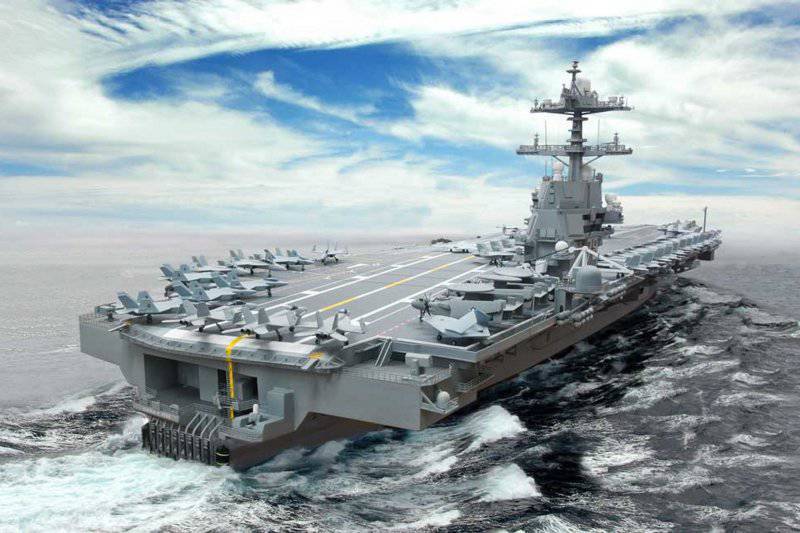 According to official data, the new aircraft carrier will be able to transport and support combat work over several types of 75 aircraft. Initially, the main striking force of the aircraft carrier Gerald R. Ford will be F / A-18E / F Super Hornet aircraft. Over time, they will be joined and then replaced by the newest F-35C. The composition of long-range radar detection aircraft, electronic warfare, as well as helicopters for various purposes will remain the same. In addition, it is planned to place unmanned aerial vehicles of several types on the new aircraft carrier. In the distant future, such technology can press manned aircraft and helicopters.

For air defense and missile defense of the ship, the aircraft carrier Gerald R. Ford will equip with anti-aircraft missile systems RIM-116 RAM and RIM-162 ESSM. Such weapons will allow the ship to intercept dangerous targets at ranges up to 50 km. In addition, to protect against threats in the near zone on the aircraft carrier will install several anti-aircraft artillery systems.

At the moment, all the basic structures of the new aircraft carrier are assembled and the final stage of construction and equipment will soon begin. After the launch of the ship, planned for 2016, the United States Navy will again be 11 aircraft carriers. In 2012, after decommissioning the aircraft carrier Enterprise (CVN-65), the number of ships of this class was reduced to 10. In the future, it is planned to transfer the structure of the aircraft carrier fleet for the constant use of 10 ships.

In September, the Congressional Research Service published new data on the financial side of aircraft carrier construction. According to the service, construction of the Gerald R. Ford cost the budget 12,8 a billion dollars (at current prices). At the same time, construction funding was fully completed in the 2011 year, and since then no funds have been allocated to the new ship. To compensate for the growth in the cost of individual components and work in the 2014 and 2015 fiscal years, it is planned to further allocate about 1,3 billion. 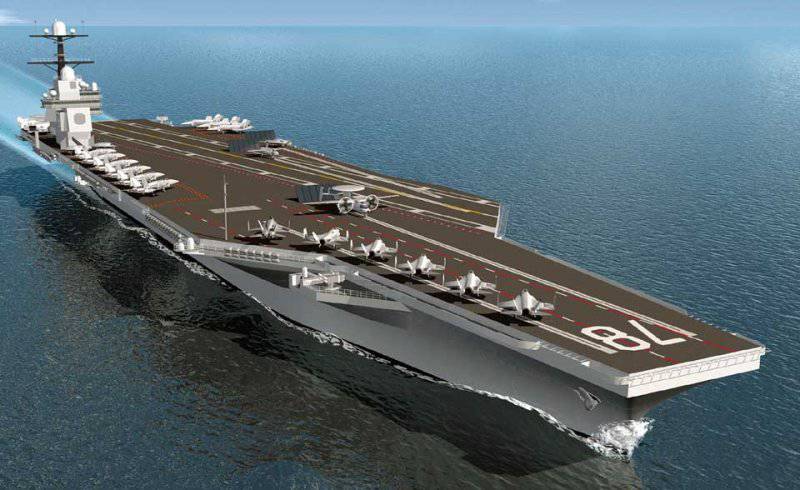 In the near future, the US Navy will place an order for the construction of a second aircraft carrier of the Gerald R. Ford type, which will be named "John F. Kennedy." Bookmark the second ship is scheduled for next year. During 2014-2018, it is expected to spend about 11,3 a billion dollars on construction, 944 million of which will be allocated in the first year of construction. In the 2018 year, it is expected to sign a contract, in accordance with which the shipbuilding industry will build a third aircraft carrier of the same type (there is information about its name - Enterprise). The cost of this ship in 2014 fiscal year prices is estimated at 13,9 billion.

The plans of the Pentagon for the next ten years include the construction of only three aircraft carriers of a new type. The service life of these ships will be 50 years. What projects will be engaged in American shipbuilding after 2023, when it is planned to launch the Enterprise, is still unknown. By that time, it is possible to update an existing project or start work on a new one. Anyway, over the next 10-12 years, the naval forces of the United States will receive three new aircraft carriers, which by their characteristics are superior to the ships currently used.

Like any other expensive and ambitious project, the construction of new aircraft carriers was heavily criticized. In the light of recent cuts in the military budget, the construction of such expensive ships looks at least ambiguous. For example, a retired US Navy officer G. Hendricks, who is a consistent opponent of modern aircraft carriers, regularly cites the following argument against the newest ships. The last of the aircraft carriers of the Nimitz type cost the treasury about seven billion dollars. Head "Gerald R. Ford" in the end will cost almost twice as much. At the same time, the normal flight intensity provided by the electromagnetic catapult will be only 160 sorties per day against the Nimitz 120. In other words, the new aircraft carrier is twice as expensive as the old one, but the increase in combat effectiveness, expressed in the number of possible sorties, is only 30%. It should be noted that at the maximum load on the Gerald R. Ford electric systems can provide 220 sorties per day, but even this does not allow achieving proportional growth of combat effectiveness.

The authors of the project of new aircraft carriers regularly mentioned that the operation of these ships will cost less than the use of existing ones. However, the savings in operation will not immediately be able to influence the financial part of the project. The main reason for this is twice the high cost of building ships. In addition, we should not forget that aircraft carriers are working as part of carrier-assault groups (AUG), which also includes ships of other classes. As of the beginning of 2013, the operation of one AUG cost approximately 6,5 million dollars daily. Thus, savings in aircraft carrier operation may not have a significant impact on the overall financial performance of the respective US Navy compounds.

Another financial problem is the aviation group. For the first years, F / A-18E / F fighter-bombers will be the basis of strike aviation of new aircraft carriers. In the future, they will be replaced by the latest F-35C. A characteristic unpleasant feature of both variants of the composition of the air group is the actual cost of combat missions. According to G. Hendrix, the entire life cycle of F / A-18 aircraft, including the cost of building and training pilots, costs the military department about 120 million dollars. Over the past ten years, carrier-based naval aviation of the United States, participating in various conflicts, has used about 16 thousand bombs and missiles of various types. Thus, the average amount of ammunition used by each of the F / A-18 aircraft operated in ten years is equal to 16 units. From the cost of the life cycle of machines, it follows that each bomb drop or missile launch cost the taxpayers 7,5 million dollars. The cost of construction and operation of the newest deck aircraft F-35C will be significantly higher than similar parameters of modern technology. In this regard, the average cost of a single bomb drop may increase significantly.

Thus, we can already say with confidence that one of the most ambitious American projects of the last time will also be one of the most expensive. Moreover, there is reason to doubt that the measures applied, aimed at saving due to a number of new systems, etc., will significantly affect the overall economic performance of the project. Nevertheless, the construction of new aircraft carriers - even if they are excessively expensive - will allow the US Navy to raise its combat potential and ensure the ability to perform combat missions over the next 50 years. 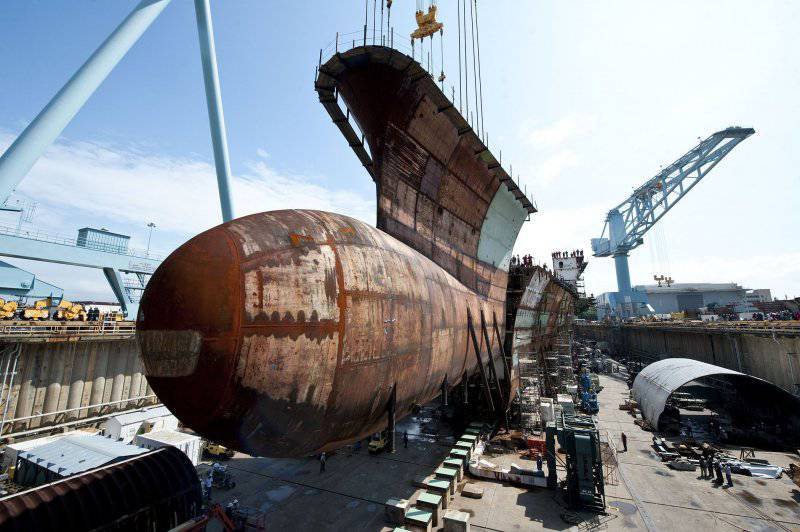 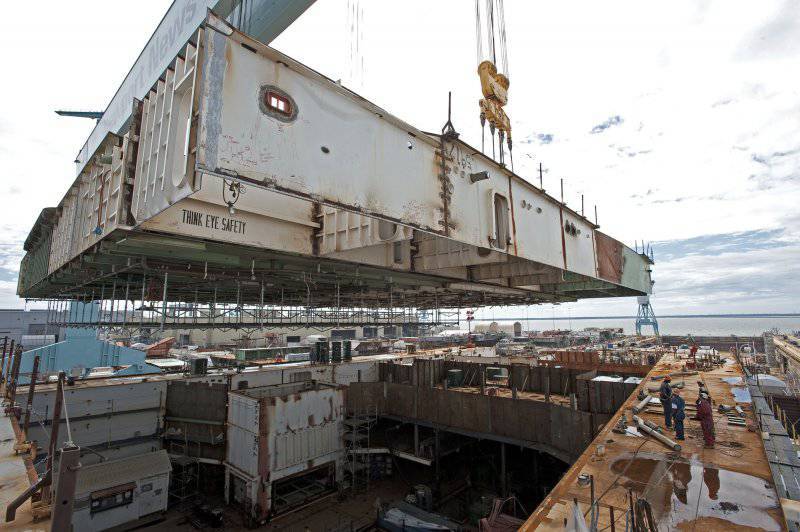 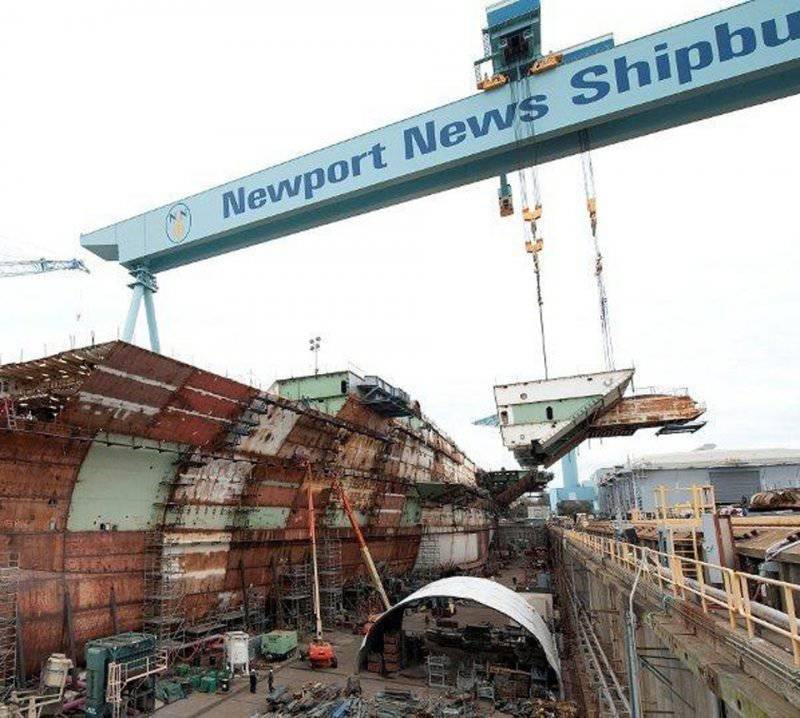 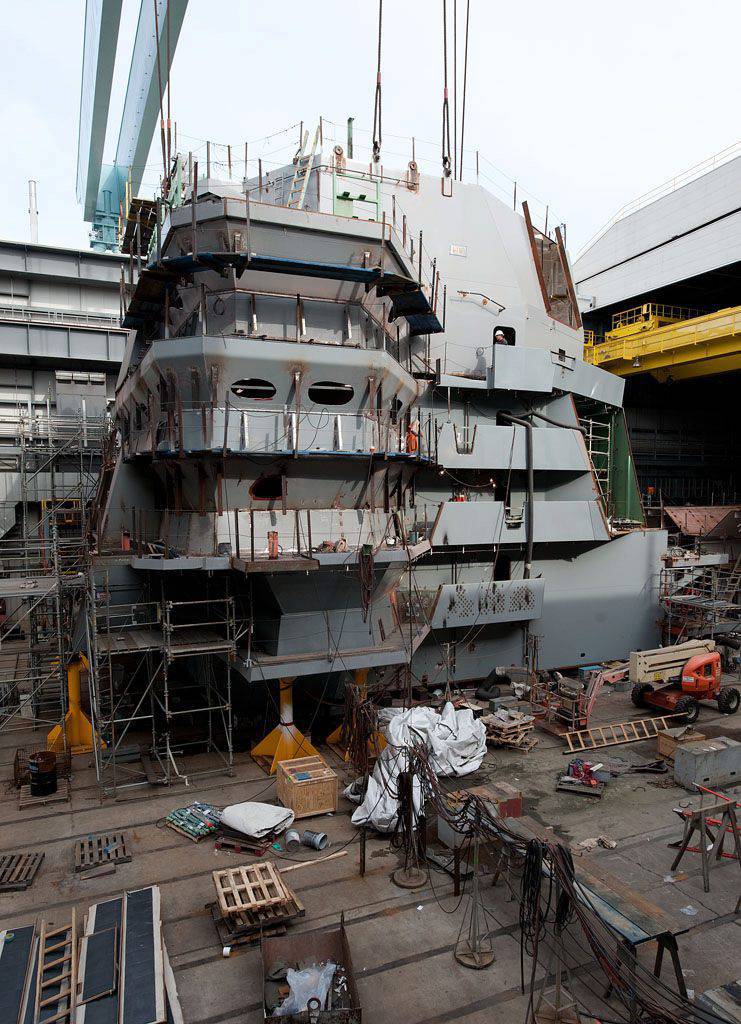 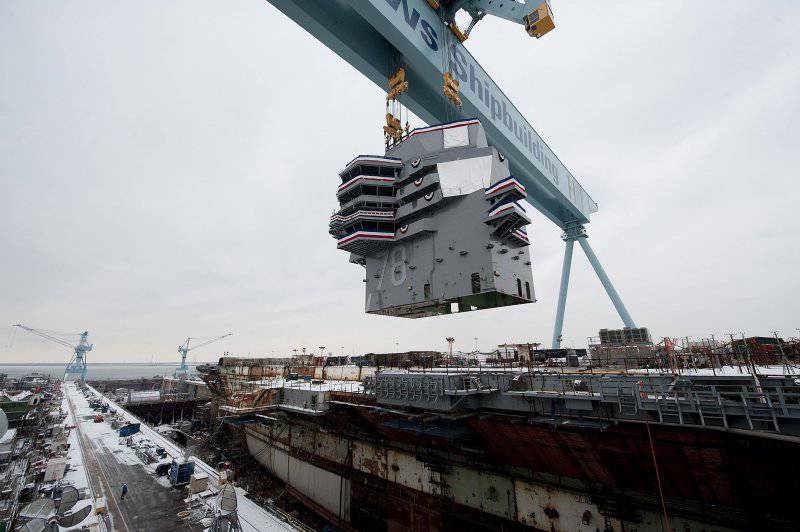 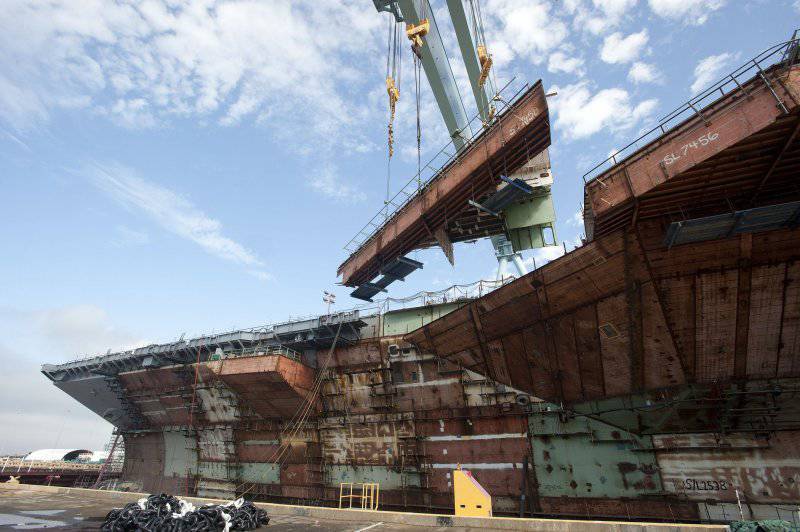 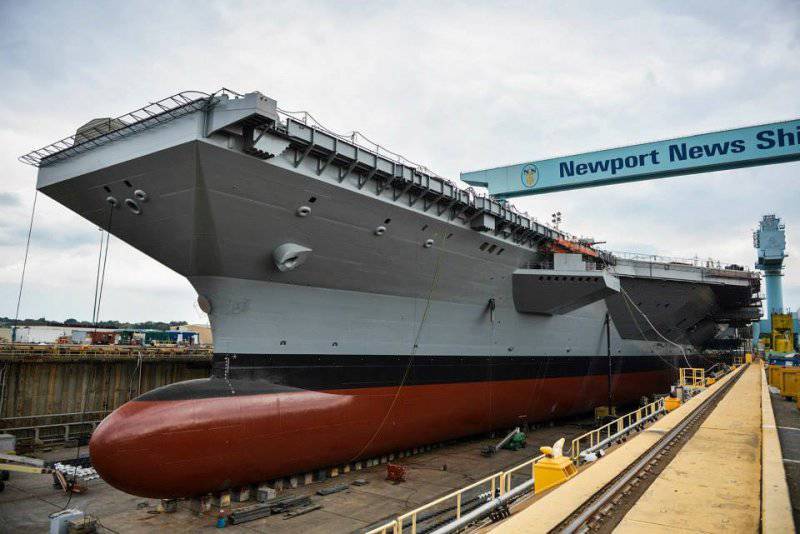 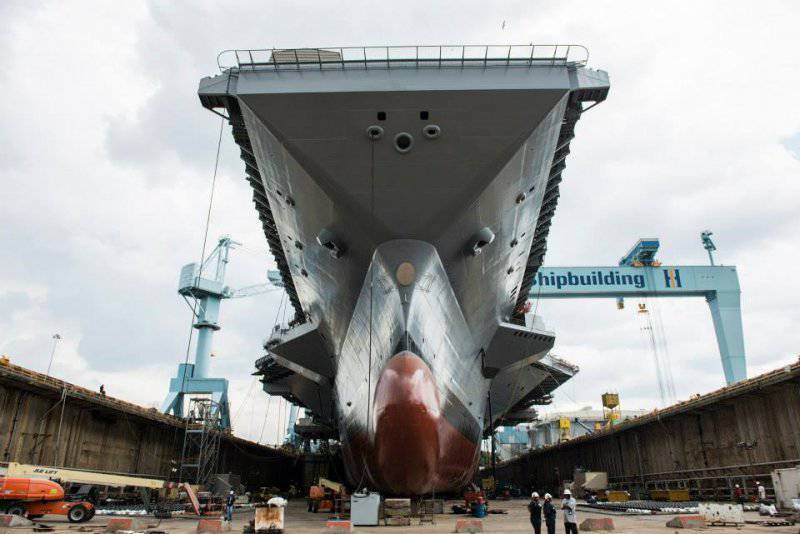 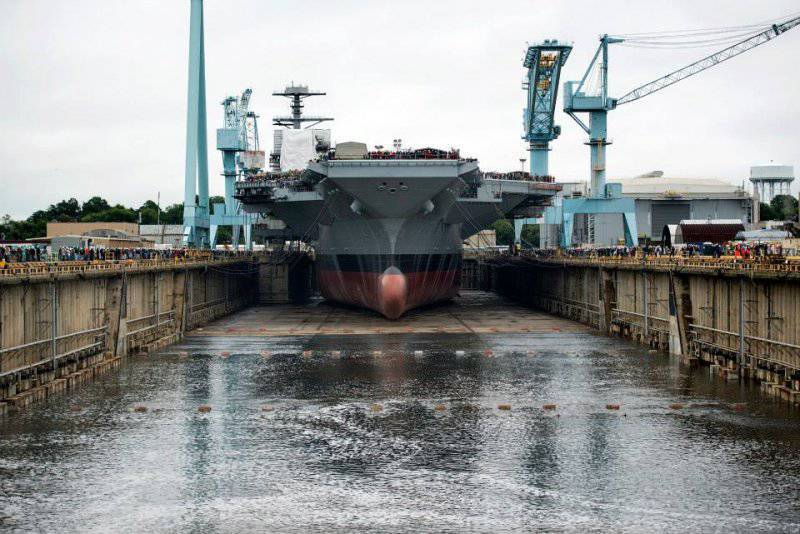