Who in Riga is hampered by a monument to the liberators?

October 25 2013
135
Apparently, the representatives of the authorities of the Baltic countries are the most carefree officials in the world. They literally do not know what to do, for wherever you spit - everything is fine everywhere: the economy is monumental, it grows more than at a “Chinese” pace; there are no problems with demography (everyone, of course, heard about hundreds of thousands of large Latvian families); all residents of the republic work exclusively in the republic and do not go to the British Isles to earn money at all - and why, if they pay for their wages (retirement, scholarship) every ordinary Latvian citizen can buy anything his Baltic soul wishes; manufacturing enterprises in Latvia (and other “Baltic countries”) grow like mushrooms; Latvia does not take loans from Latvia in the EU partners; medical care and education are, of course, the best on the planet ...


And in such conditions of “shortage” of political work, the Latvian authorities decided to find work for themselves. As they say, if the mountain does not go to Mohammed, well, or in this case to Janis, then he goes to her ... They decided to look for work closer - in the Latvian capital. The front of works is the advancement of ideas about the demolition (transfer and dismantling) of the memorial to the soldiers of the Soviet Army - the liberators of Latvia and Riga from the Nazi invaders. One of the most active representatives of the authorities in this matter is now the Latvian Minister of Justice Janis Bordans, who belongs to the “National Association” political wing. 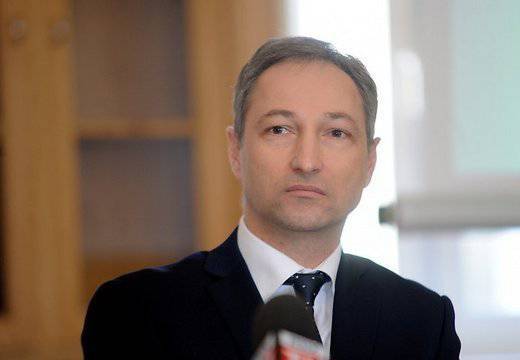 To make it clear what the “National Association” of Latvia is, it’s enough to give a brief description: these are several thousand people who are inflated with cheeks by incurable Russophobia.
So this same Mr. Bordans, who, surprisingly, concurrently, is also the acting Minister of Culture (a unique combination of posts, isn’t it true - both the Swedish, and the reaper, and the dummy player ...) proposes to demolish the Memorial since , quote:

The monument to the occupying power in Victory Park is not the place next to the National Library.

The initiative group, which included not only nationalist politicians, but also figures of Latvian culture (this is understandable, because the head of the Ministry of Culture of Latvia has already been said) decided to start collecting signatures for the demolition of the monument. The collection of signatures was carried out on one of the Latvian sites (we will not mention its name, so as not to create the impression of at least some kind of advertisement). Between appeals to the people to vote for lowering heating fees and strengthening preventive measures against hepatitis C, an announcement was posted on the website and about voting for the demolition of the monument to soldiers-liberators. After the announcement gains 10 thousands of votes, it can be sent for discussion to the Latvian parliament, which must make a final decision on the future fate of the monument. 10 thousands of votes (less than 0,5% of the population) scored ...

Recall that we are talking about a monument located on the left bank of the Daugava River, built in 1985 by the design of sculptors Lev Bukovsky and Ainars Gulbis, as well as the artist Alexander Bugayev. Work began on the monument after the proposal of the Latvian architect Ernest Baliшаš.

The central part of the monument is the 79-meter stele, its surroundings are sculptural groups. 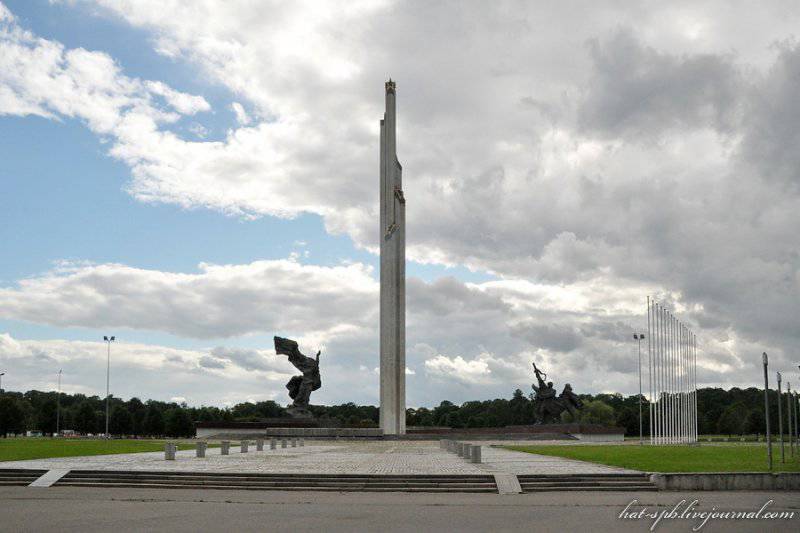 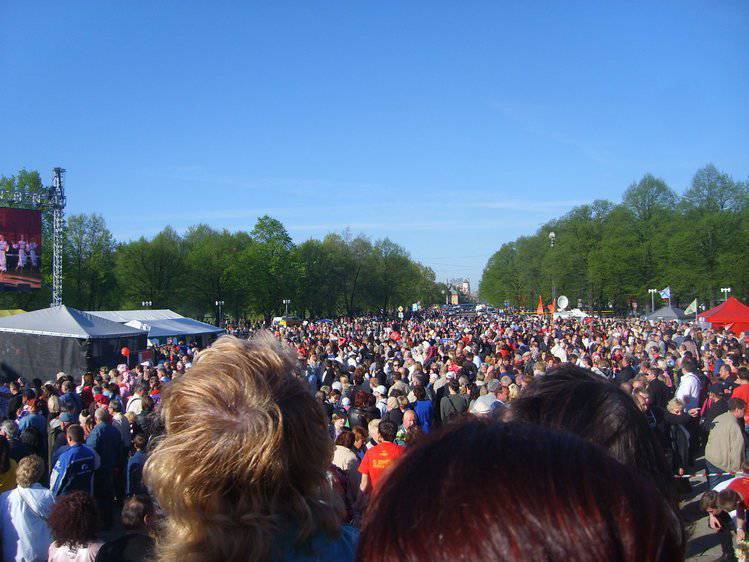 According to many residents and guests of Riga coming to the monument, they are celebrating a great victory over Nazism and fascism and are concerned that Nazism in Latvia is raising its head again.


It is worth quoting those non-ordinary Latvians, let's say, who in Latvia support the idea of ​​demolishing the memorial.
Janis Iesalnieks (member of the “National Association”):

The war for Latvia will not end as long as hundreds of thousands of hostile people live in the country.

Elite Weidemans (famous Latvian journalist) on the occasion of the celebration of Victory Day in Latvia:

This is occupying nonsense.

Colonists and their descendants gather at the monument ... It is immoral!

Zigmars Liepins (composer) urged not to be afraid of indignation at the demolition of the monument:

There will be no more noise than about Tallinn Alyosha.

Let's not go deep into thinking once again that the "colonial" regime of the USSR made all these gentlemen successful journalists, composers and directors, gave a start in life, as they say, with all the social package. We will not ... In this case, we will touch upon only the last mentioned remark that “there will be no more noise than about Alyosha in Tallinn”. It is then that Mr. Liepinsh is disingenuous. There was just a lot of noise. Yes, such a "noise" that Estonian banks, government websites and Internet sites news After dismantling the monument, Estonian tapes experienced all the delights of attacks from computers from all over the world (from the USA, Brazil, China, Turkey, Russia and dozens of other countries). The Estonian segment of the Web was paralyzed for several days, and the Estonian economy lost millions of euros. This is the most, one might say, harmless result of the transfer of the "Bronze Soldier". And there were burned-out cars, speeches of those who were not indifferent, fights with the police, which in no way combined with the status of a calm Estonia, but showed itself.

What could lead to something similar in Latvia? If the march of brave warriors from the SS battalions and their hot modern supporters in Riga annually leads to a serious confrontation, which the police can hardly cope with, then any attempt to bring bulldozers to the memorial or something similar will lead to a public explosion.

Apparently, the Latvian President understands all the consequences of this initiative. Andris Berzins, who himself often suffers from the desire to re-write stories, this time he sharply criticized the initiative of Mr. Bordaens, stating that evil spirits had opened up in the Ministry of Culture. Berzins is sure that the idea of ​​the minister is a pre-election move aimed at fueling the nationalist electorate. The Latvian president calls for the expulsion of evil spirits from the Ministry of Culture and states that the actions of Janis Bordans are unacceptable.

Meanwhile, the initiative has already reached the Latvian Parliament, and Latvia is not a presidential, but a parliamentary republic, so we can expect the continuation of provocative surprises, which Riga Mayor Nile Ushakov spoke about:

This is a new provocation of extremists who can exist only at the expense of national enmity, because they do not know how to do anything else. What else can you expect from them? No plans for the development of the economy.

Of course, from the side of Latvia, you can say: they say, well, and you, Russians, don't care about the Riga monument - put some order in your place, and then discuss other states. This, of course, yes. The order, indeed, does not interfere, and only order is not always equal rows of police, iron hands and bravura marches. Order is mainly respect, in addition to one’s own opinion, the opinions of other people, respect for one’s own history, an objective view of this history and of modernity, by the way. And then, you understand how half a century to live on subsidies from other Soviet republics is for God's sake, and how they beckoned with a pseudo-democratic credit cake, invaders and rapists immediately. The policy of opportunism comes through ...

Ctrl Enter
Noticed oshЫbku Highlight text and press. Ctrl + Enter
We are
Dreams of compensation. Latvian authorities are claiming 185 billions of euros to RussiaRepublic of the former USSR. Latvia: years without “occupiers”
135 comments
Information
Dear reader, to leave comments on the publication, you must to register.