Russia as a raw materials appendage of China

October 25 2013
132
In the late nineties, various gloomy people wrote: Russia is about to turn into a raw materials appendage of the West. It did not come true. After a dozen years, the economic crisis struck, and Western industry finally relocated to the Asia-Pacific region. The oil, which has risen in price substantially over the past years, is currently being bought up by the Middle Kingdom from Russia in large quantities from Russia. The recent meeting between Prime Minister Medvedev and Premier of the State Council of the People's Republic of China Li Keqiang reinforced the new eastern vector of the hydrocarbon development of the Russian economy. As for Beijing, which fell to the Russian pipe, he "would like not to stop." That was exactly what Comrade Lee said. 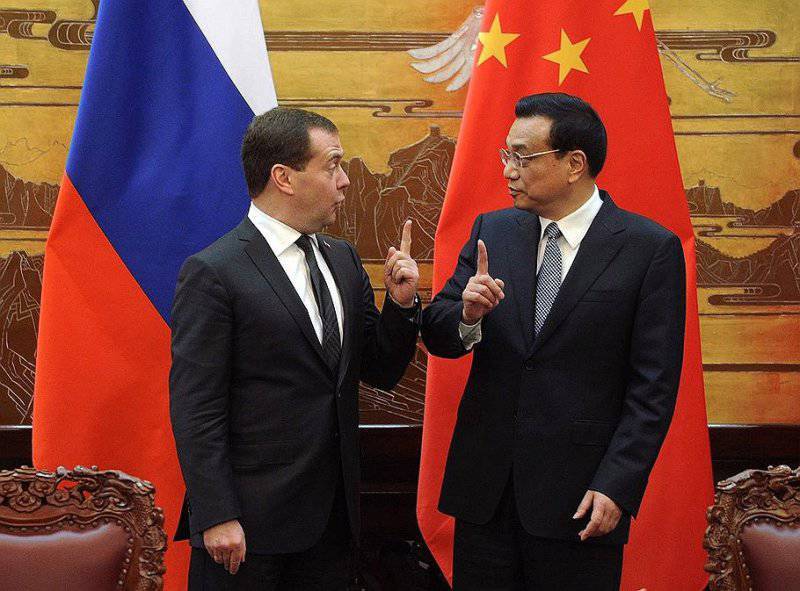 October 22 Russian Premier D. Medvedev held talks with Xi Jinping, and then with Premier Li Keqiang. The basis of the negotiations was, of course, raw materials. No matter how much Russia wants to sell something other than hydrocarbons or other natural resources, these proposals of the Middle Kingdom are of little interest. The main outcome of the negotiations: the parties agreed on the increase in oil supplies from the Russian Federation to the PRC. Over the 10 years, they will grow by 100 million tons. This is interesting to China.

Details about the contracts and intentions reported Dmitry Muravyov ("Sight"), referring to ITAR-TASS.

Following the meeting, D. Medvedev and Li Keqiang signed the 21 document. Rosneft and CNPC signed an agreement on the basic principles of the schedule for the launch of the Tianjin oil refinery and the supply of oil for processing. The company must earn in 2020 year. The project is being implemented by a Russian-Chinese joint venture (Rosneft has 51%, and CNPC has 49%).

Rosneft and Sinopec signed a memorandum on an export contract on a prepaid basis. It provides for the supply of oil in the amount of up to 100 million tons over the 10 years, starting with the 2014 year.

NOVATEK signed an agreement with PetroChina to supply at least three million tons of LNG per year from the Yamal LNG plant.

As for gas supplies from Gazprom, it is still there. The price was never agreed. So far, the parties have agreed only on the “formula”. Alexander Novak, the Minister of Energy of Russia, said: Gazprom and CNPC agreed on a price formula, technical conditions of supply are under discussion. These market prices will be accurate, and linked to the oil basket. ” In his opinion, deliveries may begin in 2018-2020.

The article by D. Muravyov provides the opinion of foreign analysts. Consulting company "Wood Mackenzie" indicates that trade in energy between the PRC and the Russian Federation to 2025 year will increase fourfold. Experts report that energy consumption in Europe is falling, while in China it is growing. In 2005, China imported 2,5 million barrels of oil per day, and in 2020, it is projected to import 9,2 million barrels per day.

What is fraught with the eastern vector of raw materials strategy for Russia, Alexander Gabuev and Kirill Melnikov (Kommersant). The oil contracts, the authors note, look “confident”, but only “the price of the question, which concessions and discounts Moscow will have to make in exchange for cash flow from Beijing”, the parties do not name. The correspondents also recall the negative experience of past Russian-Chinese cooperation. It is a question of the material and that Russia is becoming a raw materials appendage of the PRC.

The current structure of commodity turnover is increasingly fixing Russia's status as a raw materials appendage of the Middle Kingdom: in 2012, the commodity turnover of the two countries increased to 88,16 billion dollars (Russian exports amounted to 44,15 billion dollars). At the same time, the share of machinery and equipment in it, analysts say, was 0,7%. The rest is minerals (hydrocarbons are almost 69%).

As for the talks with Medvedev, their results showed that Beijing is ready to act within the framework of the previous concept: Russian hydrocarbons in exchange for Chinese loans. What are these loans?

Kommersant notes a curious statement by Igor Sechin. The fact is that the financial support from China will have to be paid, the authors write. True, Mr. Sechin assured the journalists that the question of how much Rosneft would cost to receive prepayments from Sinopec and CNPC, what the size of the effective rate on these loans would be, “shouldn't worry them,” because “costs are not“ Rosneft. Who carries them? Nothing was said about this. At the same time, an unnamed representative of CNPC told Kommersant that the company credits Russians "not for free", but did not name the amount of possible discounts on raw materials or the loan rate.

“However, previous experience shows that the Chinese are not engaged in charity at all. The first major contract of Rosneft and Transneft with CNPC for the supply of 300 million tons of oil up to 2030 of the year, concluded in 2010, turned into a scandal. The parties differently estimated the coefficient affecting the cost of transporting oil. Losses for Rosneft and Transneft could amount to $ 16,9 billion and $ 11,3 billion, respectively. They could not agree for more than a year, during which the CNPC underpaid for Russian oil, even the intervention of the top officials of the state did not help. As a result, Russian companies agreed to give CNPC a country discount of $ 1,5 per barrel. Moreover, Kommersant’s sources claim that Russia was just lucky: the Chinese demanded a discount of up to $ 10 per barrel and agreed to $ 1,5 only because of the beginning of the Arab Spring, which threatened the reliability of oil supplies to China from the Middle East. So, based on the total volume of oil supplies of the Russian Federation to China at the level of 760 million tons to 2038 of the year, Beijing on these contracts could theoretically save $ 8,5-56,8 billion. ”

“Today, relations (Russia and China) are at an unprecedented height,” the journalist quotes Dmitry Medvedev as saying "Voices of America" Evgenia Kuznetsova. This conclusion was made at the conclusion of the visit to China by the Russian prime minister.

Li Keqiang said emotionally: "If we had more time, we were ready to stand and watch the documents being signed."

Experts do not share the euphoria of the highest officials. They fear that Russia will turn into a “raw milk cow for China”, notes E. Kuznetsova. For example, Oleg Buklemishev, an associate professor of economics at Moscow State University, in his commentary to Voice of America, said that he saw nothing terrible in the provision of raw materials by Russia. There is raw material, and it needs to be sold to someone. However, the expert hopes that cooperation will switch to other areas. True, there are no prerequisites for this ...

Among the dangers for Russia, the expert called the difference in the technological development of the two countries, which continues to increase:

“Outwardly, all this looks great, but I have serious concerns that we are starting to lose more and more in competitiveness to China. I mean, if earlier we were proud of certain breakthroughs in a number of technological areas, scientific development and a number of other issues, now, apparently, we are rapidly losing these advantages. ”

But the PRC, on the contrary, takes the first place in the world in terms of the number of studies, patents and other scientific and technical evidence.

In addition to the raw material vector of cooperation between Russia and China, the media also talks about the PRC's credit strategy.

As reported from Beijing, Jan Milyukova (Gazeta.ru), Vnesheconombank agreed to receive from the Chinese State Development Bank two loans worth $ 1,2 billion for the construction of a multifunctional complex on the territory of the Moscow Slava plant and for the construction of the third power generating unit at Ekibastuz GRES-2 in Kazakhstan. VEB also entered into a framework agreement for obtaining a credit line in 700 million from the Export and Import Bank of China. In addition, RusHydro and the Three Gorges, a Chinese corporation, agreed to consider joint participation in the construction of flood control hydropower stations on the tributaries of the Amur.

The energy expansion of the Middle Kingdom is characterized by other agreements.

Oleg Deripaska's En + Group and China Huaneng Group have entered into a strategic partnership framework agreement. According to Gazeta.ru, cooperation involves the construction of power plants in eastern Russia, the supply of electricity to the domestic market and to the PRC, as well as, possibly, joint coal mining.

Thus, the new agreements emphasize almost exclusively the energy vector of cooperation between China and Moscow. China supplies consumer goods and equipment to Russia, receiving energy in exchange. And even loans issued to Muscovites in Beijing, are related to energy. As for oil and gas, the Chinese will undoubtedly trade out favorable terms for themselves. They have a successful bargaining experience. But Russia does not bargain with it: there is a lot of oil and gas, and someone needs to sell them ...

Ctrl Enter
Noticed oshЫbku Highlight text and press. Ctrl + Enter
We are
Results of the weekStrangulation: the context, conduct and consequences of the American naval blockade of China
132 comments
Information
Dear reader, to leave comments on the publication, you must to register.