Hunger is sweeping the planet

October 28 2013
61
According to the latest UN report, “The State of Food Security in the World,” about one out of every eight people on the planet is experiencing not just hunger, but chronic hunger. This is not about the fact that someone did not eat yesterday or was deprived of a bowl of soup a week ago, but about the constant malnutrition of 842 by a million people during the period of 2011-2013. UN agencies, however, have noted a slight positive shift: the number of hungry people has decreased by 26 million - from 868 million people in 2010-2012. 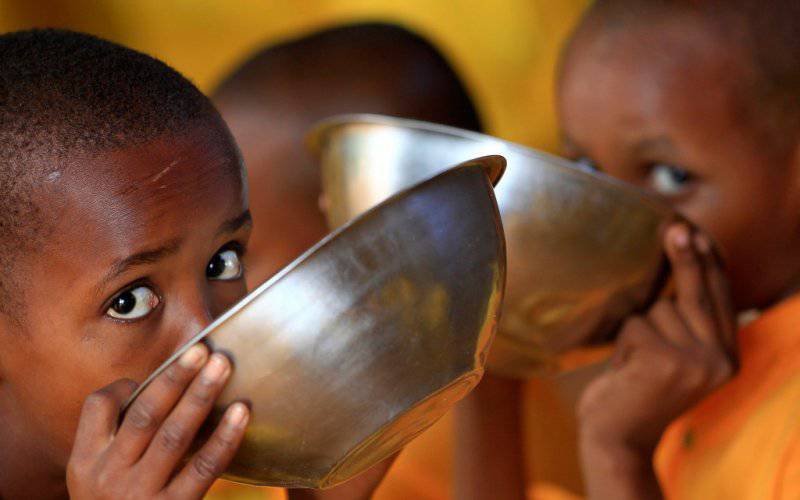 October 1 published the annual report “The State of Food Security in the World”. The document was compiled by the Food and Agriculture Organization (FAO), the International Fund for Agricultural Development (IFAD) and the World Food Program (WFP). You can read it on FAO website.

According to the report, 842 million people experienced chronic hunger in 2011-2013. This means that people did not receive enough food to lead an active lifestyle. At the same time, the number of hungry people has decreased from 868 million people in 2010-2012. It is also noted that the vast majority of hungry people live in developing regions, and only 15,7 millions - in developed countries. It is indicated that with 1990-1992. to date, the total number of hungry people in developing countries has decreased from 995,5 million to 826,6 million (by 17%).

According to the authors of the report, continued economic growth has led to increased incomes and improved access to food in developing countries. The latter is associated with the growth of productivity of local agriculture, which, in turn, is supported by the growth of public investment and the increasing interest of private investors. In addition, in some countries, the role of remittances of migrants played a role: it allowed, according to the authors of the report, to reduce poverty and improve the diet.

However, the paper notes, Africa (sub-Saharan Africa) did not achieve significant improvements. The region is still characterized by the highest level of malnutrition. Here 24,8% of the population go hungry (every fourth person). Along with Africa, there is no progress in Western Asia. “Modest results” were achieved by South Asia and North Africa.

At the World Food Summit in 1996, an ambitious goal was set - by 2015, to reduce the number of hungry people on the planet by half. This global goal was unattainable. However, 22 countries still reached their goals by the end of 2012.

The report emphasizes that fighting hunger requires the implementation of policies that protect the interests of the poor. Growth strategies should be directed towards the poor. To reduce hunger in poor countries is possible only with constant economic growth, in which all people, without exception, enjoy economic benefits.

Here is a series of facts about hunger given on the FAO website.

Most of the hungry today live in South Asia - 295 million people. In second place - sub-Saharan Africa (223 million). The third is East Asia (167 million).

In order to achieve the goal of the World Food Summit, the number of hungry people in developing countries should be reduced by 2015 by the year 498, which, alas, is unattainable at the current rate of hunger reduction.

Said Gafurov, research director of the GDP Research Center, says that food security can only be ensured by abandoning the neoliberal economic model. FAO UN expert calls "too bureaucratic organization." Gafurov also notes: “The neoliberal agenda, which dominates the World Bank and gradually captures the UN, says that everyone is for himself. At a time when the solidarity of all mankind is needed. ” The analyst is confident that the policy of neocolonialism is aimed at providing export supplies of industrial crops or cultures “for the satiated”. The bottom line: instead of rice or corn, people grow cotton or asparagus for the former metropolis.

“The world capitalist system is to blame for the fact that it is unprofitable to grow products. In Moscow in winter a kilo of strawberries costs as much as a beer in a bar. This is the result of the policy of subsidizing agriculture, which the developed countries imposed on themselves and the rest of the world. The United States at the expense of non-equivalent exchange can afford to subsidize their grain producers, so that it is sold cheaper on the world market. And in Africa, instead of growing food for the hungry, they are forced to grow cotton for export. ”

“When the world was bipolar, and in the West people were afraid of the growing influence of the Soviet Union, the idea dominated the world that it was not profit, but development itself is good. Now the neoliberal model suggests that everyone must fight for their interests. Like, if Western banks beat African peasants, then this is fair and reasonable. To me, this concept seems monstrous. ”

As for Russia, the material further notes the need for a policy in our country to increase the welfare of the poorest. However, in Russia, social policy is aimed more at the rich ...

Doctor of Economics, Head of the Sociology Department of Economics at the Institute of Social and Political Studies of the Russian Academy of Sciences Igor Bogdanov reports:

“People do not die from hunger. But we can talk about chronic malnutrition, those who do not receive the minimum amount of food recognized in the world. Today in Russia 17 of millions of people live in extreme poverty, of which approximately 7 of millions are in a state of constant malnutrition. It happens that they have no food for weeks at home, and they feed on grass. ”

As noted by Polina Chernitsa ("Voice of Russia"), the UN program to reduce the number of hungry people has been working for almost a quarter of a century, but has not brought tangible results. The poorest countries become dependent on global financial structures, which leads to internal degradation.

“In my opinion, this is a deliberately unresolved problem, because it is easier to manage hungry people. In today's world, many have begun to forget that food is weapon. Created absolutely stable mechanism and scheme. Hunger occurs in a country. The World Bank under the auspices of the UN provides a loan to this country for the purchase of food. And then the corrupt local regime begins to distribute this assistance. Naturally, food is not enough for everyone. But the country's debt thereby increases. After that, it is much easier to talk with these clans about economic and other preferences that are beneficial to those who “order music”. In this case, the one who gives loans. ”

The World Bank is an international organization, but created at the initiative of the United States. Washington has experience in fighting hunger, the analyst continues:

“A classic example is the situation of the beginning of the 20th century, when poor Latin American countries were undernourished, and good American partners helped them. What ended in a huge debt at the end of the 70s. Now 80 countries of the world can not provide themselves with food. This is Africa, not to mention the eternal problem of Afghanistan, Mongolia, North Korea. ”

In recent years, the United States, we will add on our own, regularly boast not only of providing aid to the starving countries of the same Africa, but also of additional help to the same countries. For example, in 2011, Hillary Clinton, the former US Secretary of State, said that Washington would give East Africa another 100 million in aid to fight hunger. This is money for the Horn of Africa.

However, we note that any capitalist assistance quickly shows its wrong side. The fact is that American money is used to buy American food, which is produced with state subsidies to farmers. The resulting products are not distributed at all in Africa, but are sold, albeit at minimal prices. This is the reverse side, the wrong side of American aid. Food dumping is detrimental to that frail agriculture, which is still left by unfortunate Africans who have fallen under the predatory food control of the capitalist hydra. Growing up, producing something under conditions of dumping (on which local elites thrive, profiting from the resale of cheap “help”) becomes extremely unprofitable. Instead of creating, the capitalist system, or rather, its neoliberal variety, frankly destroys. Destruction in the postmodern language is called “food aid”, so that from the outside everything looks noble. This is not a paradox, it is a substitution of concepts practiced in the "open" market. Under the guise of "fighting hunger", the United States supports its manufacturer, not forgetting the formation of a positive image in the world through the press.

Tens of thousands of people die of hunger every day in the world, and in many respects it is the result of the capitalist struggle against hunger.

According to Friedrich Schubeck, Director of the Department "Caritas" in St. Pölten (Austria), daily 7 thousands of children die of starvation. Every 12 seconds of starvation, one child dies on the planet.

As for the UN, the 16 of October, on World Food Day, Secretary General of the international organization Ban Ki-moon recognizedthat the problem of hunger is much more serious. According to him, two billion people suffer from “hidden starvation”. It was about malnutrition. The general secretary spoke of poor-quality nutrition.

"Poor nutrition also means that about 1,4 billion people are overweight, and about one third of this number suffer from obesity and are at risk for diseases of the cardiovascular system, diabetes and other health problems."

And how to solve the problem? The Secretary General believes that the key to ensuring the right of everyone to food is to develop new approaches and policies, increase production, processing and delivery of agricultural products to consumers, etc. In general, a familiar capitalist tale about a white bull. Does the United States really need to deliver even more “agricultural products” to Africa? ..

Observed and commented on Oleg Chuvakin
- especially for topwar.ru
Ctrl Enter
Noticed oshЫbku Highlight text and press. Ctrl + Enter
We are
Agriculture and food security. Problems and Prospects"Team 868" - fighters against terror from South Korea
61 comment
Information
Dear reader, to leave comments on the publication, you must to register.