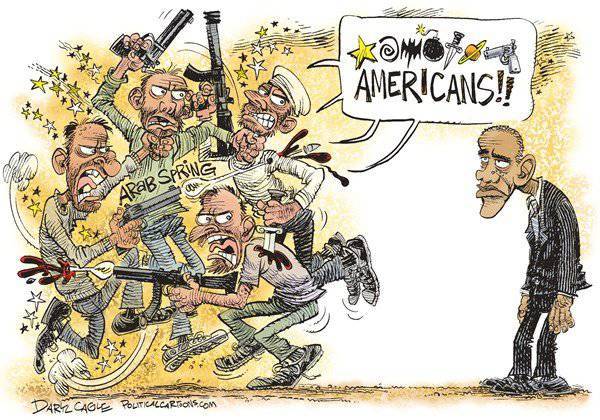 Residents of the city of Dzharaman, located not far from the Syrian capital, are joking: “A new unnatural phenomenon has appeared in Syria - metallic sediments”. But this humor is in spite of death, injury and grief. Innocent people are killed and suffer from mortar shells fired by terrorists in the recalcitrant city. Including - women and children.

Inhabitants of Dzharamany tell: On October 22 the number of shells fired at this relatively small city reached 80. One of the most cynical crimes of that day was the shelling of the buildings of the school complex. When the students were already running out of classes, suddenly there was a crash.

This dropped the first mortar shell, leaving behind trail of blood. When excited parents of schoolchildren gathered near schools, looking for their children, a second projectile landed there. Many concerned citizens came to assist the victims, and when an even larger crowd gathered, the ruthless "freedom fighters" fired a third shell.

Two schools for girls, Nazih Munzer and Fayez Said, took the brunt. According to official data, 3 teachers and schoolgirls 14 suffered. But many eyewitnesses say that there are much more victims, there are also dead. residents, head blown off.
On the same day, “opposition” mortar shells landed in kindergarten, residential areas, cafes, as well as near the entrance to the city. At least three people died, 11 injured (not counting victims in school buildings). Great material damage. Now even the replacement of broken windows is a serious blow to the family budget, not to mention the separated cars. Now the entrance to the city looks lifeless - all the shops that used to wait for customers are closed. Even those who were not injured were also forced to stop work, since this territory was not subjected to terrorist bombardment for the first time. Neither sellers nor buyers do not want to tempt fate once again. After all, on October 11, the shells that hit the Dzharamana shopping center, located in the same area, took the lives of 11 people.

Unfortunately, the 23 of October, the deadly metal rains again fell on the heads of residents. The gangsters fired five shells around the Ar-Roud quarter, and as a result 5 people were seriously injured. In addition, a residential building located near the central square of Ar-Rais was shelled.
A week ago, 15-19 of October, Syria celebrated the Muslim holiday of Eid al-Adha. On these few holidays, Muslims have decided to rejoice and forget about all the wars. Even the animal sacrifice associated with this holiday has a special meaning - Muslims, whose financial situation allows, should generously feed the poor with meat. But the “opposition” terrorists, hiding behind a kind of “true Islam”, interpreted this holiday in their own way and began to make human sacrifices.

On the first day of the holiday - October 15 - the militants “generously fed” the capital and its suburbs ... with the same deadly metal. In the Midan quarter, eight people were hit by mortar shells, in the Al-Wafidin quarter, a girl died and 10 people were injured, among them five children. Three people died and four were injured when another shell exploded in the Old City and hit one of the oldest Arab houses in the Al-Kanawat area. As a result, a fire broke out. On the same day, several shells were taken by Jaramana, five people were injured.
Another method of “struggle for democracy” - “hellish machines” - went into action. In the capital, in the Mezze district, a homemade bomb attached to a bicycle exploded. Ten people were injured.

October 19 suicide bomber blew up a car near a pharmaceutical plant Dzharamany. 15 people died and suffered, caused a lot of damage. Four blocks of the same city - Al-Homsi, An-Nasim, At-Talalih and At-Turb - came under fire from militants. The girl and the young man were injured.

In Damascus, in the area of ​​Ad-Duweil, a Christian church was shelled - a large hole formed in its wall. The shell also hit the polymer factory, and black smoke flew over the city ...

The cities of Homs and Aleppo also did not avoid this sad fate. So, on October 22 in Homs, four people were injured as a result of the shelling of a hospital in the Al-Waar quarter. As a result of a similar crime in the Az-Zahra quarter, two were injured.

And on October 23 in the city of Aleppo on Saadalla Al-Jaberi Square, six civilians were killed by missiles released by bandits, and 30 killed more.

It can be said that the new shelling season began in connection with the breakdown of the US aggression and the initiative of Russia to join Syria to the Convention on the Prohibition of Chemical weapons. Thus, Russian diplomacy deprived Washington of the reason for the attack. And this is in those days when the trigger of the attack was already almost released ... During September, the United States and its allies in the region tried to make the implementation of the agreement frustrated. But, nevertheless, Syria provided all the required documents in due time, and the international experts of the Organization for the Prohibition of Chemical Weapons arrived in Damascus.

The so-called “Syrian opposition”, as well as its Turkish and Saudi patrons were extremely unhappy with the agreement on chemical weapons. After all, the leaders of the militants were waiting for direct Washington's aggression in order to come to power on the bayonets of the US and NATO Now these plans have been postponed indefinitely. And the destructive "opposition" breaks its evil on peaceful people, exploding and bombarding residential buildings, hospitals, schools, churches, shops and everything that their little blood-stained hands reach for.

... In the evening of October 23, Damascus, Tartus and other cities of Syria were completely plunged into darkness for several hours - militants damaged an important electrical substation ...

Ctrl Enter
Noticed oshЫbku Highlight text and press. Ctrl + Enter
We are
Damascus: mortar rainsTurkey: fighters for democracy came together
23 comments
Information
Dear reader, to leave comments on the publication, you must to register.