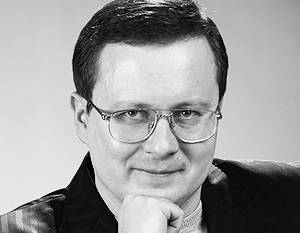 If it were not for the Horde, Batu Khan and the Eurasian idea, then they would be worth inventing. History often rewritten based on current political situation and need. And we are very lucky that now do not need to do this.


At the very beginning of 90, before the tragedy of 04.10.93, the mouthpiece of the anti-liberal patriotic opposition was the legendary Prokhanov's Day, which united everyone who did not agree with the Yeltsin course. They were different, contradictory, but very bright and large-scale people who perceived the collapse of the empire and its consequences to heart.
And which at least deserved respect. In any case, they had every reason to speak on behalf of the disappearing Red Empire and the Russians as one of the main imperial peoples in world history.
However, as you know, history repeats twice. Now self-proclaimed Russian professional patriots, cheap populists who dream of reformatting Great Russians to the level of a small European Slavic nation, have entered the arena.

In this they converge with the liberals. It is impossible, however, not to note that many of the figures of the liberal camp are, after all, professional people or business people. For them, political activity was, above all, the result of personal ambition and ambition.

For most modern professional Russian patriots, politics is a way to make money, simply because they do not know how to make money differently. It would be their personal matter if they did not dare to speak on behalf of all (!) Russians.

Anyone can get acquainted with the works of Eurasians and Lev Gumilev. To enter into a long historical and civilizational dispute with opponents in a short article is hardly worth it. However, I note that for us, the Eurasians, Lev Gumilyov is not a thinker, but a prophet. His books and ideas have long been not only an object of analysis and study, but also a symbol of faith.

Faith, which should help us again to collect and consolidate the imperial Eurasian space. It happened with Stalin and should have with us. This is a goal that justifies any means.

And now about the essence of the question. We have no desire to be civilized by Europeans or Slavs. Just because we do not want to be losers. We are Great Russians, not Slavs, or rather, far from completely Slavs, we are a single fusion of Finns, Slavs and Horde. And I will not lie, I do not like any Finnish melancholy and excessive love of alcohol, nor Slavic softness.

Slavs - like clay, of which, if desired, you can fashion anything. Soft, hospitable, open, sociable people. All these qualities are considered to be positive. However, they do not agree well with the desire to survive and win in global competition.

The Slavs themselves, without the steppe inhabitants, achieved little in history, eventually finding themselves to be German and Turkish slaves. And with high probability they would have remained forever if not for Russia and the USSR.

At the same time, the Horde factor was decisive for the Empire, since way of life, the imperial mentality of Moscow and, accordingly, Russia inherited from the Horde, from Ulus Juchi.

By the time of the arrival of Batu Khan, Kievan Rus had already died, became a field for fights of local princes. And she had to quickly become easy prey for her western neighbors. This is partly what happened, Ukraine and Belarus became the province of the Polish crown, and Ukrainians and Belarusians became the servants of the Polish gentry.
The modern Russia was founded by the grandson of Genghis Khan, the great Khan Batu, who became famous not only for his Western campaign, but also in fact founded our imperial statehood. His contribution to the creation of Eurasian statehood is no less than the contribution of Charlemagne in Western Europe.

The union of Batu Khan and Alexander Nevsky forever determined the historical fate of Russia. Historical civilization choice determines everything, unlike blood and religion. Serbs and Croats are very close, but, to put it mildly, not friends. Orthodox Bulgarians and Romanians, as well as a significant part of the Ukrainians fought against us on the side of Hitler.

You can also recall the recent conflict 2008 of the year with the Orthodox Georgia. The Slavs themselves never considered us their own, and, like the Serbs, remembered us, about friendship and brotherhood, only when it was beneficial for them. For them, we are Muscovites, as well as Tatars, Bashkirs, Buryats and other descendants of the Chingizid Empire, the heirs of a great empire.

Separately, it is worth mentioning the so-called "atrocities", which are traditionally attributed by Europeans, first to Horde, and then to Russian. Of course, in all ages there was an information war, in which the enemy is exposed as a ruthless barbarian. And Western "information about atrocities" should be divided into ten.

However, it must be admitted that the Horde were cruel, and it was precisely this trait of character that the Russians adopted from them later. We Russians are a cruel nation. We not only do not throw ours, but do not take prisoners either. That is why we won in most wars and expanded the territory of our Empire.

By the way, all imperial peoples at all times were cruel - the Romans, Persians, Germans, Anglo-Saxons, etc. Compassionate and snotty peoples have never been competitive in a global world.

However, the main truth is that if it were not for the Horde, Batu Khan and the Eurasian idea, they would have been worthwhile to invent. History is often rewritten based on the current political situation and necessity. And we are very lucky that now do not need to do this.
If we do not create an independent center of power, we will become the periphery or be absorbed by more powerful neighboring civilizations. Being the younger brother of the United States, Western Europe, China or the nascent global Islamic project is hardly a worthy role for the Great Russians, who thirty years ago controlled half the world.

The red idea of ​​the USSR has long been dead. And besides Eurasianism, I see no other idea that can unite the main nations of the former Soviet space. The nations to the south of Kazakhstan, of course, do not count, they are not related to the Horde Russian Eurasian project.

The twenty-first century in terms of money - the age of Asia. Our task is to close exports to China and other countries of the Asian region, to Asian demand. Europe is no longer a partner, its economic, civilizational and demographic crisis is very serious.

Same-sex marriage is only the most obvious thing. It is possible that in the twenty-first century, Europe will once again become the periphery of civilization, as it was during the time of Genghis Khan. Positioning yourself in Asia by Slavs and Europeans is not the best way. And to be the heirs of Batu Khan is very worthy and, most importantly, financially beneficial.

Genghis Khan is directly related to Russia. If only because he became the founder of the Eurasian power, having passed the thorny path from the disgraced prince and leader of the outcast people of long will to the terrible ruler of Asia.

The Empire founded by him was the first successful experience of economic, trade and financial globalization in human history. Even Wall Street investment analysts recognize this. The Yasy law had a serious influence on the formation of the national character of many Eurasian peoples, including the Great Russians. You can not deceive trusting, but, as you know, Judas betrayed Christ.

The tragic events of the tumultuous youth of the red Temudzhin and his relationship with Borte can be considered a model of behavior for any man who wants to live a life for which will not be ashamed.

The future founder of the empire himself said that the relationship between a boy and a girl is similar to that between a hand and an eye.

Ctrl Enter
Noticed oshЫbku Highlight text and press. Ctrl + Enter
We are
Tsar BatuOn the other side of the “red” and “white”. Izborsk Club Report
21 comment
Information
Dear reader, to leave comments on the publication, you must to register.