How in Moscow slaughtered "Muslim Communist", or Migrant Detective

October 24 2013
269
A very resonant incident occurred last week immediately after the mass demonstrations in Biryulyovo. True, here it is necessary to express more precisely: the event is not confirmed, but is vividly described. Biryulyovskiy background, apparently, was so vivid that information about the new incident on the same ground began to manifest itself only a few days after the bloody incident. Or it’s not at all in the Biryuli background, but in an attempt to use it for other purposes. But first things first.


October 15 of this year around 8 hours of the evening a young man (ethnic Chechen) in bus number XXUMX returned after celebrating the Muslim holiday Kurban Bayram from Nemchinovka near Moscow to the capital. (According to several publications at once, a young man, whose name is Andi Muslimov, is a graduate of one of Moscow universities - a university with a monumental name - Academic International Institute). At this moment, the driver of the Tajik Ali Muhammad was driving a taxi, and one of the passengers didn’t speak out about the nationality and appearance of the bus.

It should immediately be noted here that the course of events has become known from the words of Muslimov himself and the said driver of the Moscow minibus No. XXUMX. As far as these data correspond to reality, the result should show. Yes, and each reader has his own conclusions, based on the testimony provided.

For now let us return to the description of the events of October evening by Andi Muslimov and Ali Muhammad.

After the passenger allowed herself to insult the driver of the minibus in a rough racist form, Andi Muslim stood up for him in a peculiar form, telling the girl the following:

What are you, a girl, so beautiful, and so ugly swear?

The girl, again, according to the testimonies of the people mentioned, seemed to have calmed down, and the incident was settled. However, at some point, Muslim pulled out his mobile phone and began to talk with someone in the Chechen language with it, the shuttle bus approached the Klochkova Street stop. As soon as the vehicle reached the stop, one of the passengers snatched a knife out of his pocket and hit Andi Muslimov in the neck (which is remarkable, just behind). The bus stopped, Muslim, bleeding profusely, tried to defend itself against new knife blows from an accidental fellow traveler, who, with the words "Die, bitch!" Tried, what is called, to finish off a young Chechen. New stabbed, according to testimony of the victim provoked the girl, who was close to the very man who wielded cold weapons. It was she who at the moment began to shout out the words:

Look, this brute is still alive! Kill him in the heart!

The taxi passenger began to run out in horror into the street, and so, apparently, they ran away far and fast, so far, for some reason, not a single witness of the incident, except for the Tajik driver and Muslim himself, is being talked about.

Further developments, if you believe the mentioned witness, turns into some kind of phantasmagoric action movie. Andi Muslimov with several knife wounds (neck injury and several stab wounds on his arm) also left the taxi bus, but it turns out, not at all to hide from the attacker, but with a view to catch the criminal. Continuing to follow the testimony, we get a picture in which the attacker for some reason began to run away from the severely wounded Chechen, who after him "walked" along Moscow street about 200 meters, while he (the Chechen) was bleeding from his mouth (reads as an example) ), and on the run, he lost consciousness.

What did the driver of the bus at that moment, история he is silent, but then it becomes known that a taxi car driven by an Azerbaijani drove by. On the nationalities of the "actors", as you can see, the testimony especially focuses attention. It was he who, notably, from the whole stream, stopped near Andi Muslimov, who was lying on the asphalt, helped him and caused the DPS outfit. And in the 'original text' testimony says, "asked the traffic police to drive to the scene." The phrase “asked to drive up” in this context looks as if DPS officers of the city of Moscow are approaching anywhere in the city “at the request” of taxi drivers from the Caucasian republics. And maybe this is already the case? ..

Further, the story twists even more seriously. In it the driver of a fixed-route taxi again “pops up”, which, it turns out, he didn’t do anything anyway, but at that moment he tried to stop the traffic police car passing by. What exactly such attempts were expressed is not clear, but the witness claims that the PPS-nicks did not react to his actions. Considering the fact that only a bloody man was lying in 200 meters from the empty minibus, the behavior of the PPS-nick looks very blasphemous. Well, or the testimony of Mr. Muhammad Ali is far from reality ... 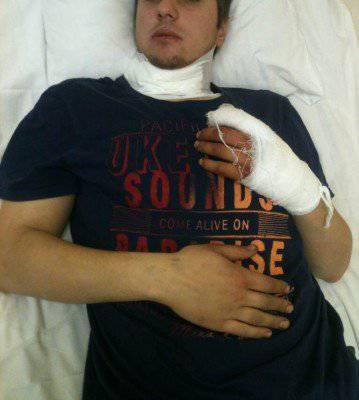 This event does not end there. Andy Muslimov was taken to the intensive care unit 71-th Hospital, where he underwent surgery. It would seem that everything is fine, it remains for the doctors to bring the treatment to its logical conclusion, and at this time the police will find the criminals to show the effectiveness of the operational actions carried out in Moscow. But the testimony now says that in less than two days Muslim, quote: "kicked out of the hospital." And they kicked out, as Muslimov himself and his relatives say, on the initiative of the head of the department, Alexander Platonov, and the deputy head doctor, Hrachya Yagubyan, without explaining the reasons. But after trying to find out the reasons for this “express treatment”, the doctors called the police ... 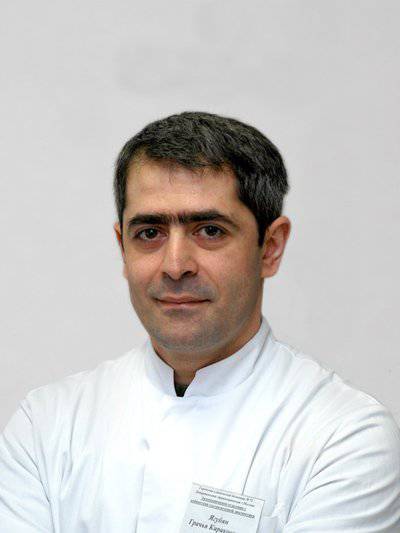 Well, further, the same testimony suggests that literally from everywhere Muslimov and his relatives “fooled”, did not start, did not want to watch outdoor surveillance cameras near the bus stop, did not punish the doctors and at the same time the prosecutor’s police did nothing workers did not pay any attention. Even in the representation of the Czech Republic in Moscow, victim, quote: "rebuffed". Only October 21 - 6 days after the attack - a statement of the attack was registered. Moreover, after the quotation: “they still called the local police officer Kashaev and recommended him to open a criminal case”. Some were “asked”, another was “recommended” ... 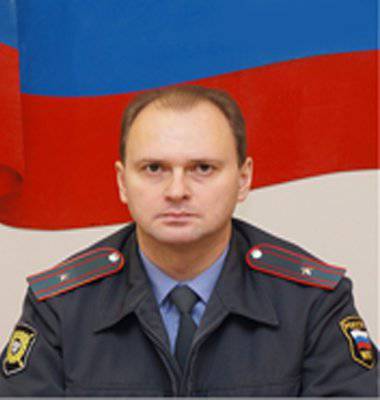 To analyze such information is, as they say, not a field to switch. There was a place for everyone here: a graduate of a Moscow “international academic” university, a Chechen, a Tajik driver, an Azerbaijani taxi driver, an Armenian doctor. As they say, everything is mixed up ... In Moscow ... It is noteworthy that this story was literally taken away on social networks with the main aim that the majority of visitors (from the south) in Moscow are peaceful and cultural people, and you know, Muscovites themselves go to the public transport with knives, infidels of the Gentiles and cut them in the throat “from ear to ear”, then “vile” Armenian doctors refuse to properly treat the injured Muslims and literally take them off from hospital beds ...
No, of course, the victim is worth supporting - as they say, it got so that the enemy does not wish. But some kind of too Hollywood story, which, moreover, suspiciously looks like an attempt to show: they say that there is some kind of murder of Yegor Shcherbakov - look better at "their own" nationalists, racists and other xenophobes - cut in Moscow from all in sight.

There are enough nationalists of all stripes in our country, but immediately there is clearly a bust. Bust with a combination of intolerant Muscovite and a polite young man from Chechnya, with an unexpected “Die, bitch”! ”, With a bloody guy with a blood-thirsty bloodstream from the mouth and throat who caught up with the attacker, busting with doctors by the fascists, "busting with the fact that" relatives came, and the clinic staff called the police, "busting with a Tajik driver who" caught "PPP nicknames, and those his calls, and bleeding young Chechens lying on the cold asphalt ignore

On the page of the victim, by the way, writes that he is now in the hospital, but will soon return. At the same time, the page of a graduate of a Moscow university in the life position section contains interesting information. Andi claims that his worldview is Islam, and his political preferences are communist. If it's not banter, the combination of a Muslim Communist appears in the story as well as, in principle, and the story itself ...

We look forward to continuing, if at all ...

PS To clarify the information provided by the victim and his relatives, the Military Review publication sent a request to the 71 Hospital of Moscow. Readers will be informed promptly of the answer.

Ctrl Enter
Noticed oshЫbku Highlight text and press. Ctrl + Enter
We are
Results of the week. “A terrible holiday spirit was hovering in the air.”Two Yegor, or What conclusions will not draw power from the popular revolt in Biryulyovo
269 comments
Information
Dear reader, to leave comments on the publication, you must to register.