October 25 2013
28
Soon the national-conscious public will have to sigh, and sigh. Like, was, was a chance but not realized. The reason for this will be the 95 anniversary of the collapse of the Ukrainian state Pavel Skoropadsky. Some will lament about the fact that this state had great potential. Others will instructively say that the hetman went to the federation with Russia and thus destroyed himself. In connection with the anniversary, we are interested in another aspect of the policy of the former Adjutant General Nicholas II.


Let me remind you that the power Skoropadsky existed from April 29 to December 14 1918 g. Seven months or more. For a civil war is a very decent time. Moreover, many people at that time Ukraine seemed to be an island of tranquility, so a diverse audience from both capitals and other cities of the Russian Empire reached Kiev. Then, when these people found themselves in emigration, they remembered their life in 1918. Quite often in their memoirs there is a phrase that Skoropadsky said to his friends:

“I take Ukraine revolutionary and intoxicated, to create order in it and keep it from Bolshevism. But when the recovery of Russia comes, I will offer it to the Sovereign, who has already recovered, as the best pearl in the royal crown, as an integral part of the Russian Empire. "

Everything seems to be logical: well-born nobleman, guardsman, general. What remains for him except to “cure” Little Russia and return it to the empire. However, things are not so simple. There is reason to believe that Pavel Petrovich did not at all regard his Ukrainian state as something temporary, as a transitional stage towards the restoration of a united Russia.

Here is an example. In May, a delegation from the Great Don Army arrived in Ukraine on 1918. It consisted of Lieutenant-General Mikhail Svechin. Skoropadsky he knew even in the service in St. Petersburg, and the meeting of two guardsmen was warm. Svechin noticed that in the hetman’s office a large map of his power is hanging. In its composition, the guest from the Don noted with surprise, included not only the Little Russian provinces, but also the Donbass, Taganrog, Novorossiysk, Rostov and Kuban.

Svechin recalled that this card was clearly Skoropadsky's pride. His old comrade could not resist and objected that cartographers swung too much and with such an approach Ukraine could lay claim to the Volga region with Siberia. Then, however, the two Tsarist generals chose not to quarrel and changed the subject. Nevertheless, the fact is obvious: the hetman, whose authority rested on the bayonets of the German occupation forces, had territorial appetites, and considerable ones.

A special place in the heads of Ukrainian figures took Kuban. Nikolai Ryabovol, chairman of the local Council, even conducted negotiations with Skoropadsky in Kiev, discussing on what rights - autonomy or a subject of the federation - this land will join Ukraine. Also in the Hetman's capital, plans for an assault on the Kuban Zaporozhye division were hatched. This compound has absorbed all that remains of the army of the Central Rada. However, after its dispersal, the division was retained. Moreover, the hetman actually did not have his own military force.

The landing, however, did not take place and the Zaporozhians were sent to guard the eastern border of the Ukrainian state. By the way, its western frontiers ended at Zbruch - the Austrians were not going to give Galicia to Skoropadsky.

If the Kuban project of Kiev remained in theory, the Crimean question was nevertheless translated into a practical plane. Claims on the peninsula presented the Central Council. In the hetman state they were not abandoned. His Grace Skoropadsky believed that Crimea should be Ukrainian. The same point of view was held by Dmitry Doroshenko, Minister of Foreign Affairs. The Germans, who were the real masters of the situation, were less categorical, so another puppet government headed by General Matthew Sulkevich (Lithuanian Tatrina) appeared in Simferopol.

While the German generals hesitated, Doroshenko fought for the Crimea. The Ministry of Foreign Affairs allocated money for the publication of three Ukrainian newspapers and campaigning. Years later, the hetman wrote that it all looked rather naive:

“... some young people in Ukrainian costumes in Yalta and in the surrounding towns urged the public to become Ukrainians. Of course, this was not a success, but it did not harm anyone either. ” 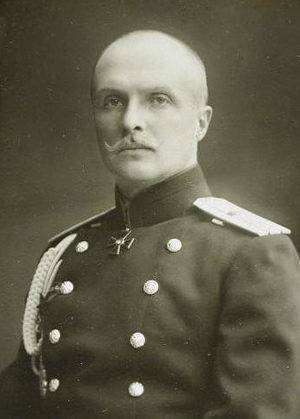 Pavel Skoropadsky: "... a new Crimean government led a new policy, far from being friendly to Ukraine, and pursued the goal of forming an independent state ..." 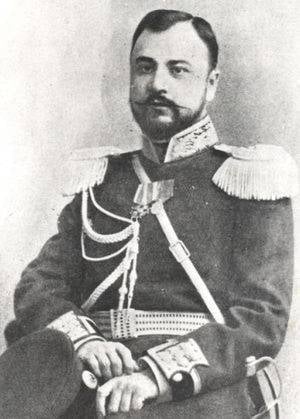 Matvey Sulkevich: "My government was neither for Ukraine nor against it, but sought only to establish good-neighborly relations, equally useful and necessary for both Ukraine and Crimea."

However, the war soon began, customs. The Ukrainian side established posts on the border with the Crimea and began an economic blockade of the peninsula. Not without firefights.

Sulkevich had even fewer troops than Skoropadsky. But the Crimean separate border division still formed. It was commanded by captain Nikolai Arnoldi. For the fact that in July 1918, the part entrusted to it defended Perekopsk, the commander was awarded - promoted to colonel.

However, the "fighting" were more economic in nature. In the Crimea and Ukraine did not miss the various goods. Along the way, a postal and telegraph message was interrupted.

In general, all this, of course, seemed like a delusion. The author of famous memories “The tragedy of Ukraine. From experienced in Kiev in 1918 year "Nikolai Mogilyansky was harsh:

“... the Russians of Ukraine and Crimea, seriously imagining themselves as two states, waged a customs war between themselves, as if it were useful for someone to rot food in Crimea when they were at crazy prices in Kiev. Shameful page!

However, both governments took it seriously. Ukraine, in particular, did not allow containers for vegetables and fruits to the peninsula. Crimea, in response, cherished plans to deprive the enemy of salt by establishing a monopoly on its extraction. And so - a few months.

Funny, but at almost the same time, a customs war was going on between the Omsk Provisional Siberian Government and the Samara “constituent” (Committee of the All-Russian Constituent Assembly members - Komuch).

In the autumn of 1918, the Germans forced Ukraine and the Crimea to begin negotiations. A delegation from Simferopol left for Kiev. Earned mail and telegraph. Border posts removed. True, not for long. They could not agree, and in October the customs war began again.

This, perhaps, was the last act of the great-power aspirations of the hetman and his government. The Germans lost the world war. 11 November Germany concluded an armistice with the Allies. And already 14-th Skoropadsky abruptly changed the direction of his policy and announced the federation with the future non-Bolshevik Russia. The next day, the Council of Ministers of the Ukrainian state decided to end the customs war.

A month later, the hetman fled from his capital to Germany. Then, in December, 1918, left Crimea Sulkevich. He went to Azerbaijan, became chief of the General Staff of the army of this Transcaucasian republic, and turned from Matvey Aleksandrovich to Mamed bek.

In 1920, security officers shot Sulkevich in Baku. Skoropadsky died in 1945, receiving mortal wounds after a raid by the Anglo-American aviation to the suburbs of Munich.

But the “creative” legacy of the two generals (I mean, what they did on 95 years ago) still worries the minds. Kiev intellectuals quite seriously rant about the fact that the hetman region, unlike Petliurism, was a serious thing, and if only a little more ...

Simferopol thinkers have their own pain. Here is a comment to one of the articles http://kraevedenie.net/2009/10/07/ostrov-krym-1918/, devoted to the events of those years:

“Yes, Sulkevich could have turned into our Crimean Mannerheim, and then there would be no many problems now ... But alas ...”

What can you say? Only the fact that the interjection “alas”, expressing bitterness and regret, fits perfectly into such reasonings.