The United States withdraws marines from Japan, but strengthens its military presence in the Far East 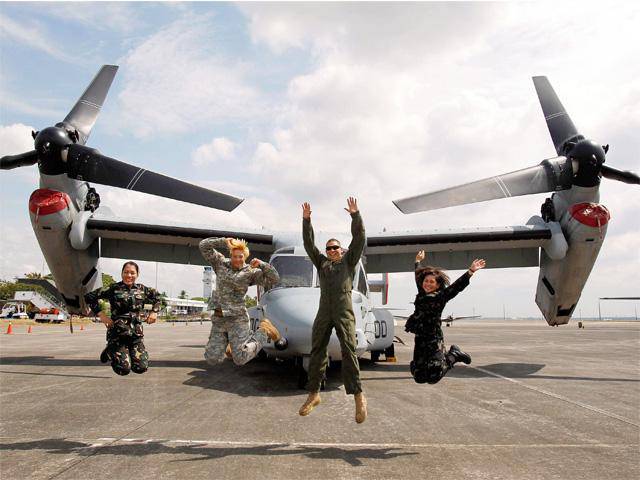 In early October, talks were held in Japan by the US Secretary of State John Kerry and Pentagon chief Chuck Hagle with Japanese colleagues (the so-called 2 + 2 meeting) on ​​military cooperation. The result of the meeting can be called twofold. On the one hand, the Americans will withdraw the Marines 9000 from their base in Okinawa. On the other hand, they will replace their "living force" with other forms of military presence.


Let's start with the withdrawal of the US Marine Corps. This step can reduce the anti-American sentiment, which is very strong in Okinawa. Okinawa is one of the best Japanese resorts. And American aviation prevents tourists from resting peacefully. In addition, the behavior of US Marines is not always annoying to local residents. However, the U.S. Marines will not go home at all: 5000 of them will be relocated to Guam, and another 4000 to the Northern Mariana Islands. That is, they simply change their location within the same region.

Also since last year, 12 of the American MV-22 Osprey troop-transport convertaplanes are located in Okinawa. These are the US Marine Corps (ILC) vehicles. They are designed for the rapid transfer of troops and light military equipment. However, the Japanese government itself asked the Americans to place these vehicles at the Japanese military base. It is exploring their potential for further purchase. The purpose of the procurement is quite frankly called increasing the amphibious capabilities of the Japanese army during operations on remote islands.

China has already expressed concern about the use of Osprey in the joint US-Japanese naval exercises Dawn Blitz ("Fast Dawn"). They were held this summer. And 14 June convertoplane first landed on the Japanese destroyer helicopter "Hyuga". Beijing claimed that these exercises are preparing attacks on China. The retired Chinese rear admiral Yin Zhou then stated that the purpose of the exercise was to work out joint US and Japanese actions to seize the islands. Naturally, China fears for the controversial Diaoyu Islands (Senkaku).

Japan is clearly seeking to gain military opportunities to seize certain islands. Such opportunities can be used anywhere - and in fact we and Japan also have a conflict situation over the South Kuriles. This is one of the reasons why we have to build up a grouping of troops on Sakhalin and the Kuriles (which we have already written about). Japan has no nuclear weapons. And in order to counter it in the Far East, it is necessary to have a sufficient potential for conventional weapons.

In the near future, the United States will send more 12 Osprey aircraft to Japan. The head of the Pentagon, Chuck Heigl, agreed on this at a meeting with the Minister of Defense of Japan, Itsunori Onodera. However, 9 thousands of US Marines will be withdrawn from Okinawa. This means that Osprey and the entire infrastructure of the USCM bases will most likely be transferred to the Japanese military, who will use them at their discretion.

In return, the US Marine Corps will deploy another military force in Japan. Not one that directly conducts hostilities, but one that can enhance the military capabilities of the Japanese. We are talking primarily about the means of intelligence. Now in Japan there will appear strategic unmanned reconnaissance aircraft RQ-4 Global Hawk, and in the future their marine variant MQ-4C Triton will appear.

Also in Japan will be placed patrol anti-submarine aircraft Boeing P-8A Poseidon. This aircraft is equipped with a search radar AN / APS-137D (V) 5 and radio intelligence system AN / APY-10. Poseidon can not be called a pure reconnaissance aircraft. Free-falling and adjustable bombs, torpedoes and depth charges can be placed in the internal weapons compartment, and underwing pylons are designed for Harpoon anti-ship missiles. Naturally, formally P-8А, which will operate from Japanese airfields, will have to work on the North Korean and Chinese naval forces. However, these aircraft have great reconnaissance capabilities, and possible patrol routes lie close to the bases of our strategic submarines in Kamchatka.

In addition, the Ministry of Defense of Japan intends to modernize four E-767 long-range radar detection and control aircraft. On the planes it is planned to install additional radio-electronic equipment, KIV-77 cryptographic computer systems.

And, of course, increasing their presence in Japan, the US military could not overlook the so-called "cyber weapon". Now on the Japanese islands will operate a joint US-Japanese "working cyber group." This means that for all neighbors of Japan, the likelihood of virus attacks on the servers of state institutions, strategic infrastructure and management, information and financial structures is increasing.

In general, we can state the desire of the United States to strengthen Japan’s military capabilities in order to strengthen the overall deterrence potential of Russia and China. At the same time, the allies of the USA (first of all, Japan) are gradually given more freedom of action. So, almost certainly the United States will support changes in the Japanese constitution, which will change the post-war status of this country as voluntarily renounced the use of military force. Pacifist Japan is no longer needed by the United States. This is partly due to the weakness of the United States, which dictates the need to shift some of the military threats to someone else. And the Americans themselves can stand on the sidelines and wait for the militarization of Japan to affect the entire region.

Ctrl Enter
Noticed oshЫbku Highlight text and press. Ctrl + Enter
We are
US foreign military bases on the images of Google earth. Part 3USMC
20 comments
Information
Dear reader, to leave comments on the publication, you must to register.