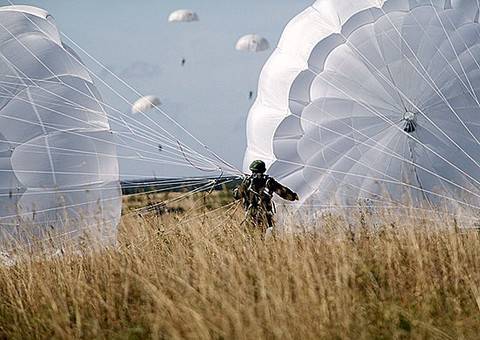 The experimental model of the modified parachute landing system (PDS) D-10P for jumping from a height of 50 m and above will be presented by the holding "Aviation equipment "at the exhibition" Interpolitech-2013 ". This was stated by the CEO of the holding Maxim Kuzyuk, reports RIA News.


According to him, the system is designed to perform tasks in extreme weather conditions and is an improved version of the serial parachute system for the Airborne Forces D-10. It uses forced automatic opening of the parachute when leaving the aircraft. The new parachute system in action will be demonstrated by the first-class parachutist tester Vladimir Nesterov, who has over 12 thousand jumps.

Development of the D-10P system began in 2011. Last year, it was successfully tested with mannequins and people. The developers have made it possible to quickly convert the serial PDS D-10 to the D-10P system and vice versa. Special units of the Russian and foreign ministries of defense, internal affairs and emergency situations can become potential customers of a promising system.

The XVII International Exhibition of State Security Means Interpolitex-2013 will be held in Moscow from 22 to 25 in October. The demonstration program, under which the new D-10P system will be demonstrated, will be held on October 26 at the Geodesy research institute test site in Krasnoarmeisk, Moscow Region.

Ctrl Enter
Noticed oshЫbku Highlight text and press. Ctrl + Enter
We are
In Moscow, the exhibition "Interpolitech-2014""Research Institute of parachute building" will test the parachute system D-12
37 comments
Information
Dear reader, to leave comments on the publication, you must to register.