February 28 2011
2
The events of the beginning of 1942, the year was not in favor of the anti-Hitler coalition. The Third Reich was at the zenith of its glory, its troops advanced deep into the USSR, and a summer offensive in the Caucasus was being developed. In North Africa, Rommel successfully crushed the 8 of the English army towards Egypt. Meanwhile, the Allied Command was developing plans for large-scale amphibious operations, clearly realizing that without landing on the mainland, Germany could not be defeated. To test the strength of the German Atlantic Wall and to test the capture of a large seaport to further supply the landing group in the UK, they began to develop Operation Jubilee, the purpose of which was to capture the port of Dieppe.

This place was not chosen by chance. The British command chose the place of "test of strength" the least protected section of the coast of France. The goal of Operation Jubilee was the French port of Dieppe with its shipbuilding docks and nearby coastal artillery batteries. This operation had no strategic or at least tactical significance. If successful, the allies simply did not have the strength to develop it. The landed units had to fulfill their tasks and then depart. The units that took part in the operation were well equipped and received the latest equipment. Tanks Churchill Mk I and Mk III, engineering and demolition equipment and landing transports did not participate in battles before. In fact, the whole operation was a grandiose exercise, only the enemy in them was the real one.

In July 1942, the operation plan was finally developed. The main backbone of the landing troops was to be the units of the 2nd Canadian Division, the units of which since May had begun intensive preparations for the landing operation using landing transports and amphibians on the Isle of Wight. Operation Anniversary was to be supported by 74 fighter squadrons and a small number of medium-sized bombers. Before the operation aviation photo reconnaissance revealed the Germans' line of defense, but could not open the disguised artillery positions.

The attack on Dieppe took place 19 August 1942 of the year. The landing force took to sea from the five British ports between Newhaven and Southampton. The Allied assault force included the British commandos 1075, the American Rangers 50, and the main force was the 4963 infantry from the 2 Canadian division. The landing force consisted of tanks 14 of the Tank Regiment - 30 tanks “Churchill”, 7 armored vehicles “Dingo” and one single tracked carrier “Bren”. The Navy allocated 8 destroyers, 19 auxiliary vessels and 200 landing barges for operation. The overall command of the operation was conducted by Major General Roberts. 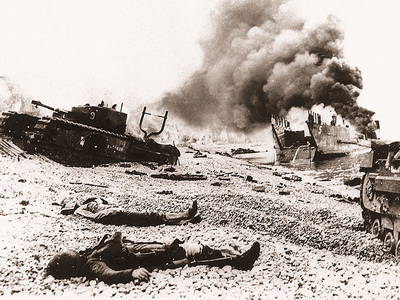 The plan of the operation involved an attack in 5 at various points on the 16 km front, which was defended by German units 302 infantry divisions and individual coastal defense units. In contrast to the well-trained invasion forces (all commando fighters had previously taken part in sabotage actions, and Canadian soldiers had intensive training), the German units consisted of reservists no less than 40 years who had undergone a regular training system.

The main idea of ​​the operation involved the 4 flank attacks, which were to occur half an hour before the decisive assault on the city. The Canadian infantry units, supported by tanks, were to attack Dieppe, Poirville and Pois from the front, while the British commandos were supposed to crush the coastal batteries in Bernevall and Vargenville.

By 03.35 o'clock in the morning on August 19, the assault convoy was in mind of the coastal strip, where it was planned to disembark, the ships with the landing force clearly unnoticed were approaching their final destination. However, the skirmish suddenly began. On the left flank of the main forces, a squad of commandos numbered nose 3 ran into German ships near Berneval. Within minutes, an alarm sounded throughout the German defense line. The element of surprise was lost.

Despite this, on the right flank the detachment commando No.4 acted successfully. Having landed on the shore in time, the squadron in 5: 40 approached the main object of its attack from two directions. In 6: 07, his fighters defused German machine gun nests and attacked the German artillery battery with 6: 30, laid down charges and safely destroyed all the guns. Already to 7: 30 squad commando plunged into transports and went back. On the left flank, the squad of commandos No.3, coming out of the battle with the German ships, turned out to be strongly scattered, only the 17 soldiers and the 3 officer were able to land on time. But these forces turned out to be enough. A detachment so intensely bombarded its target - the Goebbels battery - from machine guns and sniper weaponsthat she never shot at the participants of the main assault on Dieppe. Having completed their mission, the saboteurs successfully retreated. However, despite the success of these two private actions of the commandos, the Canadian infantry units suffered a complete disaster. Whether the Germans had or not some intelligence data about Operation Jubilee (and there is every reason to assume that they did), they were able to foresee the option of landing on the Dieppean coast and prepared for the meeting with the German economy.

Equipped hidden nests of machine guns kept every meter under fire on the approaches to them, barriers of barbed wire stretched across the coast. When the surviving soldiers of the first wave of the landing began to burrow into the sand right on the coast, the Germans began to fill them with mortar mines with such accuracy that the attackers lost last doubts about the level of training of the German defense. German snipers coolly "shot" all those who tried to give orders, not a single senior commander survived the landing morning, only a few of the junior commanders and sergeants survived. The fight came down to a separate series of desperate feats of individual groups of servicemen, who quickly found themselves cut off from the main forces. 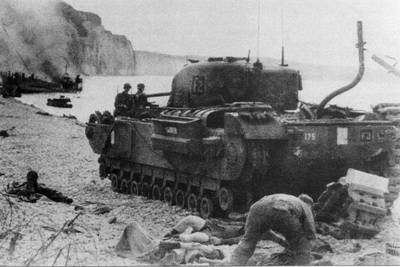 The storming of the port city of Dieppe stalled in the shallow water and finally collapsed on the sandy beaches. The royal Hamiltonian and Essex Scottish regiments bore the brunt of the German fire, and it’s just a miracle that one of them didn’t even get home, but into German prison camps. The tank-assault transports, which tried to support the infantry with fire, met fierce resistance as soon as they managed to get out from under the cover of the smoke screen, and the tanks were destroyed one by one, barely having time to move along the gangways. Despite this, 27 tanks were able to reach the coast, and 6 were able to break through the wire and other obstacles and climb the city embankment. One of the tanks climbed the casino steps, and 3 others drove along the embankment, snapping fire and suppressing German defense points until ammunition ran out of tanks. In the end, all the tanks were hit, and the members of their crews died.

Not fully clarifying the situation, Major General Roberts ordered the retreat, and the last part of the landing did not have time to land on the beach and turned back to England. The general retreat began at 11 in the morning and lasted until 14 in the afternoon. All the time of the operation "Jubilee" over the landing site was a continuous air battle, in which from both sides took part about 945 aircraft. The British lost in the air 106 machines, the Germans - 48.

Of the 4963 Canadian soldiers involved in the operation, 3367 were killed or captured, British commandos were missing 275 people. The English fleet lost its destroyer, 33 landing barges and lost 550 people killed. The total losses of the Germans were only 561 people killed and wounded.