October 23 2013
10
Back in the late thirties, the German company Henschel began work on the so-called. gliding bombs. Within the framework of this program, it was supposed to solve two problems at once: to significantly increase the hitting accuracy aviation ammunition, as well as protect aircraft from anti-aircraft artillery fire. The first Henschel project in this area was the Hs-293 ​​guided gliding bomb. It was a small aircraft with remote control by radio channel (later a wired control system was created) and solid propellant boosters. A slightly modified SC-500 high-explosive fragmentation bomb was used as a missile warhead. From August 1943 to August 1944, Luftwaffe pilots conducted several dozen raids on Allied ships using Hs-293 ​​bombs. A large number of ships were sunk or damaged. 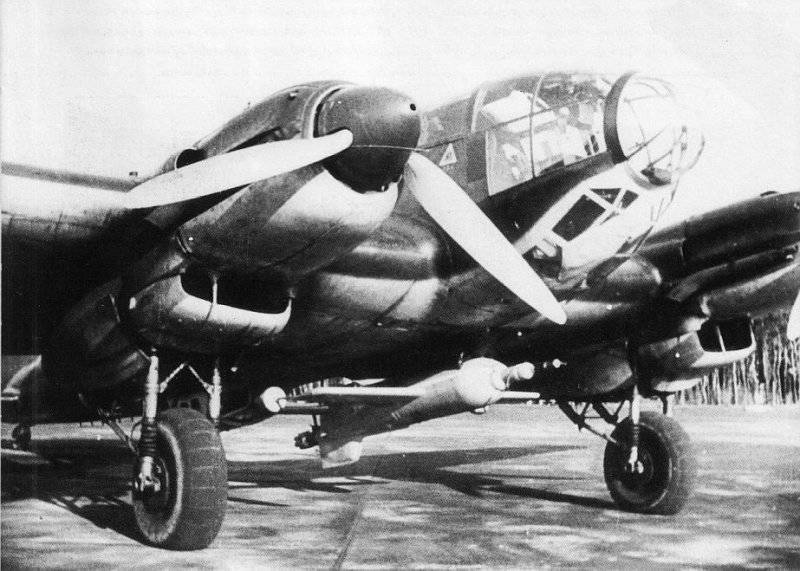 It should be noted that the use of the Hs-293 bomb against ships was, in a certain sense, an enforced measure. Back in 1941, Henschel began the development of a special modification Hs-293, designed to destroy enemy ships. It was assumed that the new planning bomb Hs-294 would hit ships in the most vulnerable part - in the hull below the waterline. It is easy to see that with this method of attack, the planning bomb could become one of the most effective Luftwaffe anti-ship weapons, since a large hole in the underwater part in most cases leads to the death of the ship.

When developing a new anti-ship bomb, the experience gained in the early stages of the Hs-293 project was widely used, which accordingly affected the appearance of the new ammunition. Bomb Hs-294 was built according to the normal aerodynamic configuration with a trapezoidal wing and vertical tail of a small area. As the fuselage planning bombs used warhead characteristic cone-shaped. The warhead with a total weight of 650 kg could pierce the sides of the ships and undermine the target from the inside. However, a fairly powerful warhead had a large size, which led to the need to design a new tail of the bomb. As a result, the length of the ammunition Hs-294 was 6,15 meter. For comparison, the bomb of the previous model had a length of 3,8 m.

In the middle part of the fuselage-warhead with a diameter of about 0,6 meters were attached console trapezoidal wing span 3,96 m. To control the roll wing was equipped with ailerons. In early versions of the project, under the fuselage, in the wing area, there were two tanks for fuel and an oxidizer for liquid rocket engines. The Walter HWK 109-507 engines themselves were located in the tail section of the bomb, under horizontal tail. The tail part of the fuselage bombs contained control equipment, including the radio command receiver. The control system activated the aileron and elevator steering gears. The rudder was absent due to the relatively small area of ​​the keel and ventral ridge. On the tail, they provided a pyrotechnic tracer designed to track the movements of the bomb and facilitate its targeting. 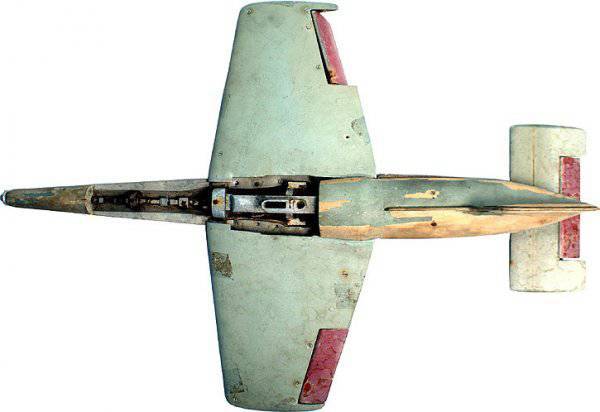 The anti-ship bomb was quite heavy - with a warhead weighing 650 kg, the total launch weight of the ammunition was 2175 kg. Such a difference in weight was due to the relatively heavy construction of the planes and other aggregates, as well as the mass of fuel.

During the first tests that took place at the end of 1942, the new Hs-294 anti-ship bomb, when dropped from a height of about 5400-5500 meters, was able to hit a target at a distance of up to 13-14 kilometers. Method of use of ammunition as follows. The aircraft carrier Heinkel He-177 was to find the target and go on the combat course. At a sufficient distance from the target (more than 14-15 km), the navigator-scorer should aim a special viewfinder at the target and drop the bomb. After uncoupling, the ammunition had to turn on the rocket engines and accelerate to a speed of about 880-900 km / h. The fuel for the Walter HWK 109-507 engines was only enough for 10 seconds of work, during which they developed thrust for 590 kgf. Next, the navigator with the help of the control panel had to correctly direct the bomb at the target according to the three-point method. At the same time, such an attack was considered correct, in the course of which a bomb at a distance of several tens of meters from the ship entered the water at a slight angle to the surface. After the bomb hit the water, the planes, tanks and tail were separated from it, and the warhead continued to move by inertia. According to the calculations of German experts, at the time of hitting the underwater part of the ship, the combat unit, moving like a torpedo, should have a speed of about 250-300 km / h. With such a speed, the warhead could pierce the hull of almost any ship of the early forties. A powerful explosive charge completed the attack, destroying the ship from the inside.

For some reasons, in the early forties, the Hs-293 project received a higher priority, during which a planning bomb with a high-explosive warhead was created. Work on this ammunition allowed to correct some shortcomings in both projects. Thus, during testing of the Hs-293 bomb, it became clear that the technical personnel of the Luftwaffe units could not provide all the conditions necessary for the operation of complex and capricious liquid rocket engines. In this regard, first Hs-293, and then Hs-294 received new accelerators WASAG 109-512, using solid fuel. Characteristics of rocket engines remained at the same level, but their production and operation became simpler and cheaper. 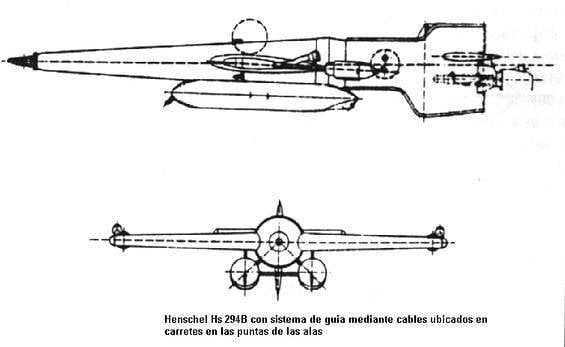 Updating the Hs-294 bomb with the experience gained from testing other guided munitions has significantly improved its characteristics. The testing and refinement of the anti-ship bomb continued until the 1944 year. According to reports, the planning bomb Hs-294 was adopted by the Luftwaffe in the 1944 year, at the same time began its mass production. According to various sources, the German industry managed to manufacture 120-170 bombs of this type. Despite the relatively large series, the Hs-294 bomb was never used in a real combat situation. Manufactured ammunition was used only for testing and for training bomber crews.

The main carrier of the anti-ship planning bomb Hs-294 was to be a He-177 bomber. The dimensions and characteristics of this aircraft made it possible to transport the bomb on an external sling. The possibility of using a He-111 bomber was also considered. However, the most interesting carrier of the new bomb could be the Arado Ar-234. Because of its relatively small size, this aircraft had to tow a bomb using a special rigid system. This version of the use of the Hs-294 bomb remained on the drawings.

The Henschel He-294 controlled bomb was manufactured serially, but was never used in combat. After the end of World War II, the documentation of the German guided-bomb projects fell into the hands of the Allies. Part of the German developments in the future was used in projects created by the winning countries.

Ctrl Enter
Noticed oshЫbku Highlight text and press. Ctrl + Enter
We are
Air-to-air missile Henschel Hs-298 (Germany)Guided bombs for the Luftwaffe
10 comments
Information
Dear reader, to leave comments on the publication, you must to register.