October 23 2013
3
In June, the Italian company Oto Melara (part of the Finmeccanica group) 2013, together with the Italian Navy, conducted successful tests of the Davide / Strales naval artillery complex with a DART guided missile (Driver Ammunition reduce Time of flight). Tests have shown that the shells from the first production batch fully comply with the requirements and therefore can be taken into service. Successful tests of DART serial projectiles can be considered the beginning of a new stage in the development of naval weapons. The Davide complex with DART ammunition is the first serial ship-mounted artillery, using guided projectiles. 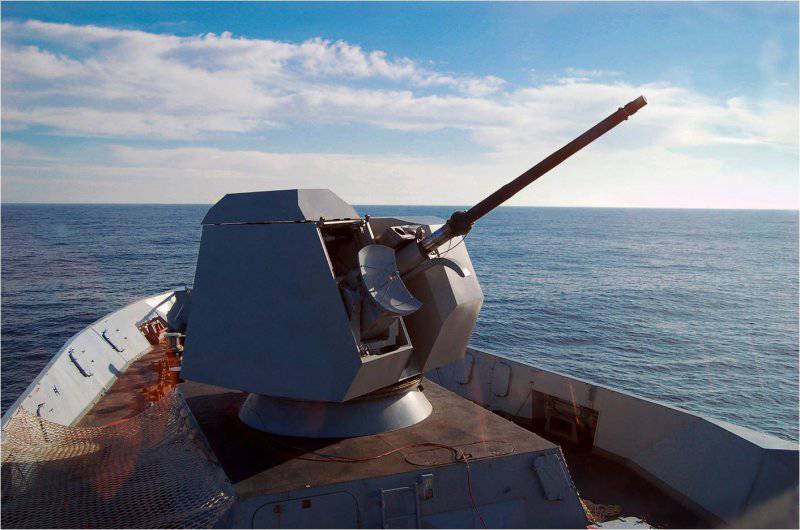 During the first stage of test firing, the corvette Comandante Foscari fired ten DART shells at a target located at a distance of 5 kilometers. A steel sphere with a diameter of 1,5 meters, located on the coast at a height of several meters from the ground, was used as a conditional target. According to reports, eight out of ten shells exploded in the immediate vicinity of the conventional target and hit her with their fragments. The second stage of test firing meant firing at an air target simulating a maneuvering anti-ship missile. During the time that the shooting was carried out, the training target approached the ship from 5 to 3 kilometers. The control system of the complex Davide / Strales was able to bring all ten shells to the target. The distance between the projectiles and the target was sufficient to hit the latter with fragments.

Thus, in the course of firing at fixed and moving targets, it was found that the DART shells of the first production batch fully meet the requirements of the customer, which allows starting the full use of the new ammunition, as well as offering it for deliveries to third countries.

The Davide complex (name for the supply of the Italian Navy) or Strales (export designation) is a set of technical tools installed on Oto Melara Super Rapid artillery guns of 76 mm caliber. The complex includes a fire control system with a radar station manufactured by Selex Galileo. The station is used to search for targets and control the DART projectile. According to reports, it is currently expected to equip the Davide / Strales complex with new Thales Nederland PHAROS radar and radar control systems. It is expected that such refinement will significantly increase the potential of the complex, since the passive phased antenna array is used in the new radar station. In addition, the PHAROS radar is installed on ships as a separate module and therefore does not require significant re-equipment of artillery installations already on the ship. As a result, it is intended to ensure the compatibility of the Davide / Strales complex with the Oto Melara artillery systems of old models having a suitable caliber.

The main element of the Davide / Strales artillery complex is the DART guided missile. Creating a promising ammunition began in the late nineties, commissioned by the Italian Navy. The project was supposed to create a universal projectile caliber 76 mm, able to effectively hit surface and air targets. In order to fulfill all customer requirements, Oto Melara has applied an original technical solution. The DART projectile is subcaliber, the actual diameter of its body is 40 mm. The ammunition is made according to the aerodynamic scheme "duck". In its tail part there is a fixed plumage with six stabilizers. In the middle part there are movable rudders mounted on a rotating ring. After exiting the barrel and separating the pallet, the rudders open and control the flight of the projectile. 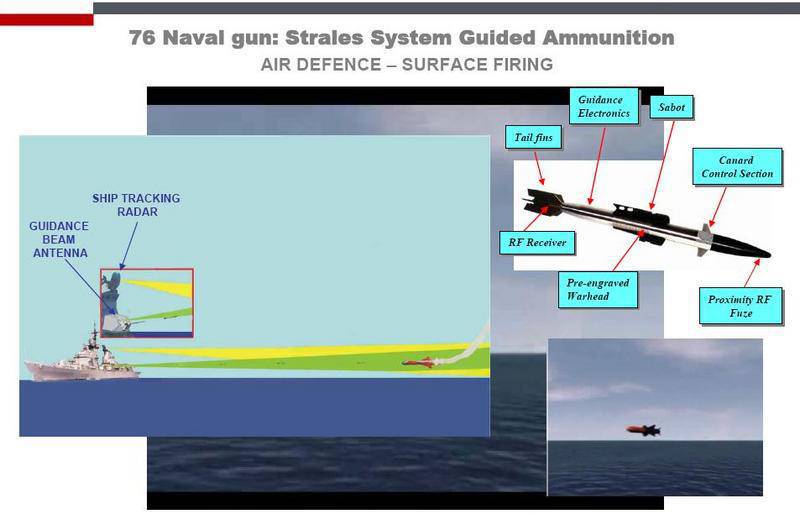 In the head of the projectile installed part of the control equipment, including the steering wheel drives, and the fuse. The receiver of control signals, in turn, is located in the tail section of the munition, inside the tail unit. The tail part of the body is given under the warhead. To hit a target, a DART projectile carries 2,5 kg of finished tungsten alloy fragments. The mass of the charge of the warhead was not called. Of particular interest is the fuse of a new ammunition. According to reports, this system can operate in six modes, providing undermining of the warhead after contact with the target, with deceleration, at a distance from the target, etc. In the remote blasting mode, the projectile uses its own radar target sensor, the principle of operation of which is borrowed from the corresponding anti-aircraft missile systems.

DART projectile is controlled by a radar station. The control radar coordinates its actions with the ship tracking station and highlights the target. At a distance of about 800 meters from the ship, the projectile enters the control beam of the radar and is automatically held there. If necessary, the ship's system can give a signal to undermine the warhead at the right time.

Perhaps the most interesting feature of the DART projectile is its maneuverable characteristics. It is precisely the maintenance of the required resistance to overloads that led to a number of technical difficulties. However, Oto Melara specialists were able to solve the problems that occurred. The initial velocity of the sabot projectile after leaving the barrel is 1100 m / s. This speed allows the ammunition to maintain high maneuverability at long range from the ship. So, at a distance of more than 100 meters from the artillery, the projectile is capable of maneuvering with longitudinal overload of about 50 units. At a distance of 2000 meters from the gun, the maximum overload is reduced to 35. After 5,5 km, a DART projectile can maneuver with an overload of up to 20 units and up to 12,5 after flying a distance of 8 km. Thus, the DART projectile in a wide range of distances exceeds all existing and prospective short-range anti-aircraft missiles in maneuverability. At the same time, it is alleged that the Davide / Strales artillery system is cheaper than the corresponding class of ship-borne air defense systems.

The Davide / Strales complex with a DART projectile can effectively hit modern maneuvering anti-ship missiles at a distance of about 5 kilometers. The maximum range of shooting at targets that do not require active maneuvering is 25 km. According to available data, the main method of using new ammunition is shooting at modern anti-ship missiles from an effective range. At the same time, it is claimed that the destruction of one missile before the passage of the 2 km boundary from the ship would require a queue of no more than five shells. The tests, which took place in June of this year, have shown that in some conditions a lower consumption of ammunition is possible.

To date, Oto Melara has manufactured and supplied to the Italian Navy ten artillery mounts of Super Rapid equipped with Davide equipment. Another six sets of equipment installed on existing artillery installations of suitable types. In addition, Oto Melara is currently assembling around 10-15 artillery mounts, which in the near future will be installed on ships under construction and on upgrades. The carriers of the Davide complex are or will be frigates of the types FREMM and Horizon, as well as the aircraft carrier Cavour. Also, a number of artillery complexes in the export version are ordered by Colombia, where they will be installed on modernized frigates of the type Almirante Padilla. The company-developer expects new orders from other countries.

Ctrl Enter
Noticed oshЫbku Highlight text and press. Ctrl + Enter
We are
Cannon fodder, or conversations about the present and future of ship artilleryForeign tank guided munitions
3 comments
Information
Dear reader, to leave comments on the publication, you must to register.