On the military alliance of Israel and Saudi Arabia against Iran 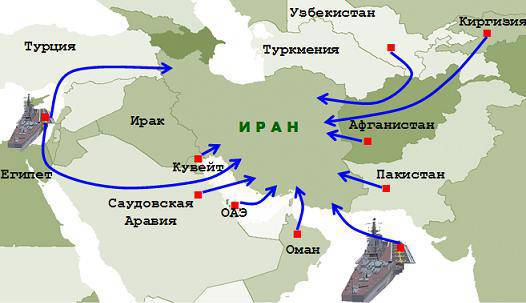 The Saudi Arabian Ministry of Defense has placed an order with the United States for the supply of high-tech cruise missiles and aviation bombs totaling $ 6,8 billion. The contract is expected to be signed within a month after the application is approved by Congress. According to the Pentagon's Office of Military Cooperation (DSCA), the supply of arms will not change the military balance in the region and does not pose a threat to neighboring states. Is it so? Now, when Israel and Saudi Arabia are discussing the possibility of a military alliance against Iran, this deal looks like a military strengthening of the Arab-Israeli alliance, the likelihood of which is taking on real shape ...


Tel Aviv and Riyadh perceived the US refusal to launch a military strike on Syria and President Obama’s first steps to normalize relations with Tehran as the beginning of the White House’s new stage of transformation of the geopolitical structure of the Middle East. The Saudi royal family, unhappy with Obama’s policy, responded asymmetrically to Washington, challenging the United Nations. The Kingdom of Saudi Arabia (KSA) was the first state to refuse membership in the UN Security Council, making claims to the activities of the Security Council. Riyadh is not satisfied with the fact that Bashar Asad still remains in power, there is no success in resolving the Palestinian-Israeli conflict, and besides, according to Saudi diplomats, the UN has not made sufficient efforts to ensure that the Middle East becomes free. from weapons mass destruction (meaning the Iranian nuclear program).

The Russian Foreign Ministry called the Saudis demarche "strange." It is obvious that the accusations against the Security Council in the context of the Syrian crisis are anti-Russian. Earlier, Russia and China three times blocked the resolution of the Council, tougher sanctions against Syria. Arab UN member countries also do not hide their bewilderment by Saudi Arabia’s refusal of honorary status and urge Riyadh to reconsider, at least in order to ensure the representation of the Arab world in the Security Council. The Saudi leadership, however, argues that "the working methods of the Security Council do not allow it to carry out functions to maintain international peace and security." So the monarchy responds to the United Nations rejection of the Saudi calls for armed intervention in the Syrian conflict and the resolution of the Iranian nuclear issue through military force.

Riyadh is not the first time declares its claims to dominance in the region of the Middle East. It came to the point that the Saudi leadership was offering Barack Obama to pay for a military operation against Syria in the days of the Syrian confrontation, as if it was a question of the services of an assassin. The White House’s refusal to take military punitive measures against the Syrian government caused deep disappointment of the Arab sheiks. Washington has been criticized for failing to carry out its own threats.

Dissatisfaction with Obama’s policies was even more pronounced in Saudi estimates of the first signs of a thaw in Iranian-American relations. Riyadh concluded that the United States and Iran are secretly planning a strategic alliance aimed at weakening Saudi influence. There is nothing unexpected in the fact that rapprochement with Iran may meet the regional interests of America. According to the Americans themselves, the option of control over the Middle East, which would not allow any of the countries to become an unconditional military leader with claims to the role of a regional superpower, is beneficial for the United States. The classic way to achieve this goal is to maintain the balance of power and at the same time maintain constant tension in relations between rival states, in this case Saudi Arabia and Iran.

The longstanding one-sided orientation in the Islamic world to Saudi Arabia led the United States to lose influence among Shiites, and Sunni Islam under Saudi influence adopted an anti-American course. Riyadh not only finances foreign military intervention in Syria, Saudi special services support terrorist Sunni militant groups in all countries from Algeria to Pakistan, including the Taliban fighting with the Americans in Afghanistan. Further unconditional friendship with Riyadh has become dangerous for the United States, and the assumption that soon Washington’s foreign policy will stop serving the interests of Saudi Arabia seems to be quite reasonable.

Of course, Washington’s rapprochement with Tehran does not guarantee a significant strengthening of the US position in the world of Shiite Islam, but a chance for a decline in anti-American sentiment arises in a number of countries of the Greater Middle East. These are Iraq, Lebanon, Syria, Bahrain and Afghanistan. In addition, a “reset” of relations with Iran would allow the United States to avoid the threat of being dragged by allied commitments into a war to protect Saudi Arabia. Nevertheless, Washington still permits the forceful “closure” of the Iranian nuclear dossier by attacking Iran’s nuclear infrastructure. Israel strongly insists on this scenario. Saudi Arabia does not hide its interest in the military crushing of nuclear facilities of the Islamic Republic of Iran.

Tel Aviv announced its readiness for an independent operation against Iran. The direction of strikes on Iran through the territory of KSA is considered by the Israeli military to be among the main ones. In addition to hostility towards Iran, Israel and Saudi Arabia have a common goal of overthrowing the regime in Syria, Tel Aviv and Riyadh agree in support of the military government in Egypt, they also found a common language regarding the inadmissibility of enhancing the geopolitical role of their common rival Turkey. Information about the secret negotiations of Israel and Saudi Arabia for several years is not among the sensational. Even contrary to US plans, the world can witness the emergence of a seemingly unlikely Arab-Israeli alliance, claiming the role of a “collective superpower” region.

This autumn brought chaos to the ranks of the American allies. The plans of the US military action in Syria were not supported by the most loyal ally of Great Britain, the overwhelming majority of NATO countries refused to participate in this adventure, the leaders of many other allied states declined solidarity with President Obama, and now the long-term Middle Eastern partners claim independence in resolving the issue of war with Iran.

There are already a lot of examples of Israeli amateur performance. More than a quarter of a century ago, in 1981, Israel destroyed the Iraqi Ozirak nuclear reactor shortly before its commissioning. The Reagan administration then officially condemned the attack, but the Israelis consider it one of their most successful military operations. In 2007, Israel launched air strikes on the allegedly unfinished Syrians in a desert area in the east of the country to the Al-Kibar reactor, which the IAEA did not know about to demonstrate its determination to destroy the nuclear projects of neighboring countries in their infancy. Then the Bush administration was divided in its assessment of this attack, and many high-ranking politicians in the United States still believe that the raid was premature. In May of this year, Israel struck at Damascus airport, as well as at several missile bases in Syria. The real goal of Israeli air strikes against Syrian military facilities was to test the possibility of overflying this Arab country in order to strike Iran’s nuclear facilities. Such rehearsals of the beginning of the war are held by Tel Aviv without regard to the reaction of the world community. The UN has not responded to any of the latest Israeli armed action in Syria.

Saudi Arabia, unlike Israel, makes its debut publicly these days in the role of a UN authority repudiator for the first time, but the royal family prepared for many years to enter this dangerous trail, closely linking their foreign policy activities with the support of international terrorist organizations. Talking about the moral principles of Saudi diplomacy has not been adopted for a long time, and therefore the consent of Saudi Arabia to provide the Israelis with a military corridor can be viewed as participating in strikes against Iran.

It is also about the temporary basing of aircraft at Saudi air bases. Israeli Air Force transport aircraft have already been spotted in Saudi Arabia for unloading ammunition, which in the event of war with Iran is more convenient to have here, at hand. And it is even better for Israel if the Saudi military pay for the cruise missiles and aerial bombs for these purposes and deliver them from the United States themselves. This is the main point of the new order of the KSA Defense Ministry, which costs almost 7 billion dollars. In the nomenclature of the supply of more than 90%, it is ammunition for American-made fighter-bombers that are in service with the Air Force and Israel and Saudi Arabia. By endorsing this contract, the US Congress will give the green light to the dangerous designs of Tel Aviv and Riyadh, and the American military contingent in the Persian Gulf will be embroiled in a dangerous adventure by the two allies who have come out of obedience.

Ctrl Enter
Noticed oshЫbku Highlight text and press. Ctrl + Enter
We are
Pakistan - Saudi Arabia: Strategic CooperationEmirati gates of the Russian "defense"
38 comments
Information
Dear reader, to leave comments on the publication, you must to register.