Who has "covered" an equivalent of the Russian nuclear triad - Gennady Onishchenko?

October 23 2013
193
A real sensation arose after the publication of news agencies in which, on behalf of Deputy Prime Minister Olga Golodets, it was stated that due to the expiration of the term of office, Gennady Onishchenko was retired from the post of head of the Rospotrebnadzor. One of the first such information bomb published “RIA-News". At the same time, the agency provided a direct quote from the deputy chairman of the government, Mrs. Golodets:
Gennady Onishchenko has expired the term of office as head of Rospotrebnadzor, in connection with which he leaves this post. The new head of department will be Anna Popova, deputy head of Rospotrebnadzor. 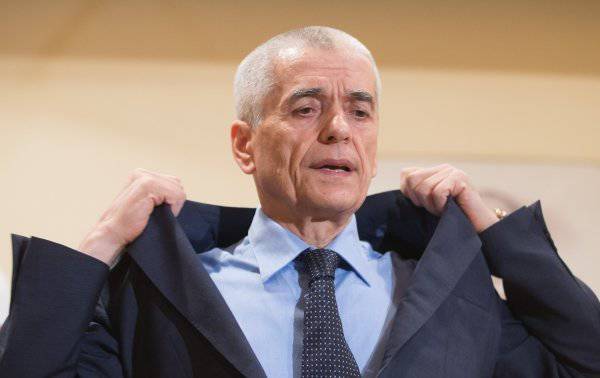 After such a publication, most of those Russians who saw and continue to see Gennady Onishchenko not so much the official in charge of the Federal Service for Supervision of Consumer Rights Protection and Human Welfare, as the equivalent of a nuclear triad capable of cooling off any “benevolent” attitude towards to the Russian state, it even became somehow lonely. After all, Onishchenko has already become, in the minds of Russian citizens, a man who, as they say, can win the war (both informational, cold and cheese-sour) without any loss of personnel, but with a large destructive effect for the enemy. At the same time, Onishchenko’s work was (and still is) a truly jewelery one — a quiet, calm voice that gives killer arguments against which, as they say, you will not trample. And here - such regrettable news. It may be that the mentioned Anna Popova is no worse than Gennady Grigorievich versed in Lithuanian cheeses or Georgian mineral water, but it is unlikely (at least initially) to repeat the feats of the charismatic figure of her boss (former or still current).

It is noteworthy that on the RIA-News page more than 80% of readers recognized the news about the dismissal of Gennady Onishchenko as negative.

Why does the material have to add assumptions and assumptions every time on the topic of the status of Onishchenko? Fired or not? The fact is that after a very short period of time, the same RIA-Novosti, but already with reference to the press service of Prime Minister Medvedev, issued material of a different plan. Natalia Timakova (Press Secretary of Dmitry Medvedev):

Resignation order Onishchenko not signed. There is no such document. The decision on whether Onishchenko will remain at his post, or another candidate will be appointed to this post, within the competence of the Prime Minister.

An interesting course of events. It is especially interesting due to the fact that both Deputy Prime Minister Golodets and Prime Minister Medvedev were at a visit in Beijing at the time of their statements (either through their own or through the press secretaries). It turns out that the first persons in the government during foreign trips are so poorly in contact with each other that they allow themselves to say exactly the opposite. Maybe it's because of the Beijing smog ...

Interestingly, in our cabinet all decisions are made as “unanimously”? .. In this regard, I recall the recent resignation of the head of Roscosmos, Vladimir Popovkin, about the possibility of which the media wrote a few days before replacing Popovkin with Ostapenko. At the same time, the Deputy Prime Minister (again, you know, the Deputy Prime Minister, but another one), Dmitry Rogozin, in his microblog, criticized publications about possible rearrangements in Roscosmos. Some time later, the resignation did take place - Dmitry Rogozin was silent ...

Now it’s all the other way around: the vice-premier (only Golodets) already “dismisses” a federal official, and the head of government, through his secretary, declares that the document on dismissal of Onishchenko does not exist at all.
After such a charade and another manifestation of the government "unanimity", the situation, as they say, got out of control. Federal officials, who were asked the question of who is telling the truth - Timakova or Golodets, apparently, were not in the know themselves and answered something streamlined. Here are some quotes.

The head of the Ministry of Agriculture, Nikolay Fedorov:
It is difficult to comment on the resignation of Onishchenko.

Apparently, indeed, it is difficult, especially if you are in a ministerial chair — you say a little more — Olga Golodets will take and “dismiss” without agreement with his superiors.

Sergey Dankvert, the head of the Rosselkhoznadzor, turned out to be no less “streamlined” in his statements:
I can say that with Gennady Grigorievich I worked with 2000, and was always surprised at the refinement of his syllable. He always amazed because he found expressions that surprised.

Not a word about the care of Onishchenko, but for some reason about him in the past tense ...

However, on the statements of Olga Golodets about the dismissal of Gennady Onishchenko, the reaction of Gennady Onishchenko himself looks more interesting and bright. Deputy Prime Minister Gennady Grigorievich called “a strange character”, not related to the number of decision-makers ... He replied and said so! After Olga herself, Golodets remains to write “on her own,” but she is unlikely to do it. We have so simple officials of such a high rank do not go away.
On the evening of October 22 on the site of Rospotrebnadzor in the “Guide” section, Gennady Onishchenko still appears as the head of the department, and the one mentioned by Olga Golodets, Anna Popova - as his deputy.

So, if we summarize the available information, it turns out that either information about Onishchenko’s dismissal from the post of head of the Rospotrebnadzor and the subsequent refutation of such information is a kind of high-level stuffing for assessing public opinion (well, it is still possible to survive), or this is another indicator of "effectiveness" and the “coherence” of the work of our government (and now this is experienced painfully).

It now remains to wait for the final of this storiesin which either the Deputy Prime Minister will achieve the coincidence of his words with reality, or Gennady Onishchenko, following the Lithuanian cheese, will ban Olga Golodets.

Ctrl Enter
Noticed oshЫbku Highlight text and press. Ctrl + Enter
We are
Prime passion. Who will replace Yatsenyuk as prime minister of Ukraine?Results of the week
193 comments
Information
Dear reader, to leave comments on the publication, you must to register.