"The Guardian" under the hood

October 23 2013
23
The other day it became known that the British Prime Minister could not calm down due to the revelations of Snowden. And the truth is: the revelations are not published anywhere in China or Russia, but in the Guardian newspaper. Recently, Cameron almost personally commanded the destruction of hard drives in the newspaper’s editorial office, which was later ironically ridiculed: that the prime minister does not know what information storage technologies exist in the 21st century network. Alan Rasbridger, editor-in-chief of the Guardian, explained that the materials are kept by American partners - because in the US, the traditions of freedom of speech are stronger than the British. All these statements, apparently, seemed to the chief keeper of the London secrets extremely offensive. And he launched a new campaign against Rasbridger, which was picked up by some of the competing Guardian newspapers, the Daily Mail and the Mirror. Here it is, the struggle for a place in the sun ... 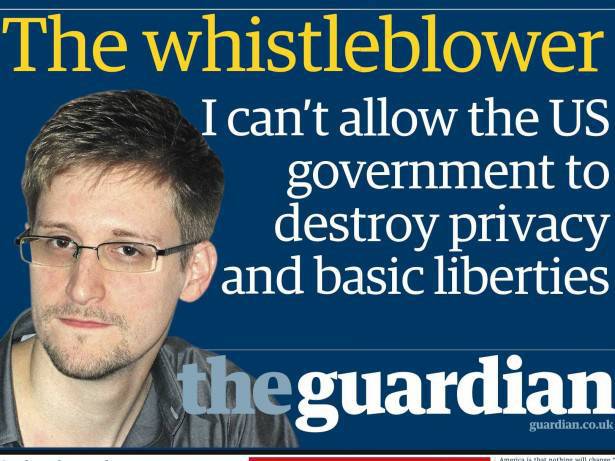 David Cameron was harassing parliamentarians to find harm from secret leaks, namely the internal affairs committee. The task of this profile committee is to prove that the publication in the newspaper of classified information caused damage to the national security of Britain.

In general, the homeland was in danger, and Rasbridzh and Snowden began to look like enemies of the British people.

Meanwhile, in Brazil, where the Guardian employee Glenn Greenwald (more precisely, a former employee) lives, other events developed. Greenwald, who had received the first materials from Edward Snowden, decided to part with the newspaper and open his own news agency. There is another information: the journalist allegedly labored in the website project of billionaire and the founder of eBay, Pierre Omidyar (the site will be linked to investigative journalism). However, the last project exists only in the plans. In any case, Greenwald’s decision to leave the Guardian suggests that the progressive British edition doesn’t have a happy end, but something opposite, like the ending of a gloomy thriller. In the end, a secret service colleague and close friend of Greenwald (also from Brazil) by the name of David Miranda, was captured at the Heathrow airport not so long ago, searched degradingly - and then tortured with nine-hour interrogation with an addiction, like some kind of mature terrible terrorist. The media was taken away from the correspondent, but no charges were brought against him. In short, democracy, human rights, freedom of speech, and so on.

In response to history with Miranda, as well as with hard drives, Glenn Greenwald said that from now on he would start writing “more aggressively” than before about government surveillance. The British will not be particularly good in this sense, a journalist from Brazil said, adding that “they” will “regret” their actions.

It was in August, and since then the publication in the Guardian continued. Rusbridger also stated on the website of the newspaper that he would not refuse exposing publications. He clarified at the same time that part of the materials will be published and overseas partners of the newspaper - the New York Times, for example.

What is the excavated Snowden about the "mistress of the seas"?

On the "Military Review" already reported about it. It was about the secret program "Tempora", implemented by the so-called "Center of Government Communications". The program allows you to listen to telephone conversations and track e-mails and allegedly feeds 850000 employees in both the UK and the USA, that is, the Government Communications Center and the NSA, respectively. The number of employees does not seem fantastic when you find out that Tempora handles millions and millions of calls and messages that pass through approximately two hundred special high-speed lines.

Andrei Khabarov ("Vesti") indicates that Tempora holds two billion Internet users under its cap and intercepts millions of phone calls every day. Speaking about the attempts of the British government to punish the Guardian, the journalist draws a parallel with the well-known events of the 600 of the last century, when Duncan Campbell told his compatriots about the top-secret electronic intelligence service, working in partnership with the NSA. Already at that time these special services intercepted messages all over the world. Campbell argued that the eavesdropping organizations in Britain behaved like a state in a state, out of any control. The journalist for such a straightforward statement was, of course, arrested. Campbell himself later said:

“For the first time I told about their existence, they wanted to put me in jail for 30 years. This was after my first revelations. Fifteen years later, when I was preparing a program for the BBC about the details of a clandestine operation to put British spy satellites into orbit, the BBC came with a search. Searches were at my home and in the editorial office of the magazine where I worked. And the BBC Director was dismissed. ”

Today, the same happens with “The Guardian”, A. Khabarov believes.

We must assume, we add to this, that the government will not get rid of the editorial board. It is difficult to guess what exactly the decision will be made and how then the disobedient Rasbridger will be punished. One recalcitrant — American comrade Snowden — is already hiding somewhere in Moscow. Or maybe in Tobolsk - who knows! .. Be that as it may, one thing is clear: Cameron today shows no less perseverance than the chief editor of the Guardian. And this means that the newspaper will undoubtedly be punished. The British press should get a very, very illustrative example, and society should understand who is in the flock of sheep, and who is the shepherd. In addition, Tempor has not been canceled, and new Snowdens are not needed by world secretaries. And some British newspapers pretending to be loyal government circles do not need competitors. Such is the simple and clear story, comrades, gentlemen.

Meanwhile, the site of the disgraced edition moved to another domain zone: from guardian.co.uk to theguardian.com.

Finish all the same good the news.

"Military Review" promises to follow the history of the British newspaper, oppressed by suppressors of freedom of speech.

Ctrl Enter
Noticed oshЫbku Highlight text and press. Ctrl + Enter
We are
Results of the weekGoogle Earth - a military secrets debater
23 comments
Information
Dear reader, to leave comments on the publication, you must to register.