Singh in Russia. And the pipe, and the cruiser, and the Customs Union

October 23 2013
59
A meeting took place the other day between Russian President Vladimir Putin and Indian Prime Minister Manmohan Singh. This is the fourth meeting of the Russian and Indian, let's call them delegations in the current year. If we talk about Russian-Indian summits in general, then this became 14. The meeting focused on the development of trade and economic ties between the two countries. 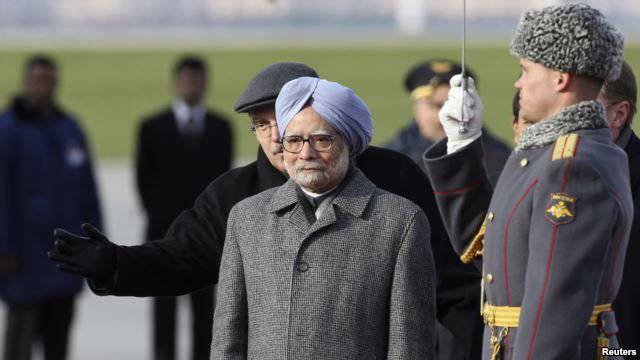 If we talk about the current state of economic interactions between Russia and India, then, to put it mildly, we can say: I would like more. Well, in fact, the level of turnover in 11 billions of dollars for our economies, which in addition are also part of the overall economy of BRICS, looks close to unintelligible. 11 billion dollars is about 12% of the turnover of Russia and China - for example. In terms of imports, Russia for India occupies a more than modest 36 place (the top three: the United States, the United Arab Emirates, China). In terms of export - 28 place. There is where to grow, there is something to strive for.

And although annually between India and the Russian Federation an increase in turnover is observed, it cannot simply be called impressive for such large-scale economic systems. To improve the situation, Moscow considered measures to stimulate mutual trade and increase the number of joint projects being implemented.

To begin with, it is worth listing all the areas of cooperation in which the interaction between Moscow and Delhi in the near future should be intensified. The first is the energy sector, the second is the possibility of India’s participation in the GLONASS project with simultaneous deployment of two signal-calibration stations on the territory of this state, and the third is new projects in military-technical cooperation. If all these areas of work will be carried out actively and productively, then the authorities of both countries believe that after a couple of years there is an opportunity to bring the turnover to the value of 20 billion dollars.

Now it is necessary to proceed to the consideration of individual projects more thoroughly.

So, the first is the sphere of energy and energy supply. Here, the Indian side expresses the idea that Russia could increase the volume of oil and gas supplies in the southern direction due to a land connection (pipe connection) of Russian fields with Indian consumers. During the summit, an agreement was reached to create a joint Russian-Indian research group, which should explore the possibility of building a pipeline that could in the future connect Russian suppliers of oil and gas with consumers of these energy sources in India.

If you temporarily put out of the brackets the risks that are associated with the construction and subsequent operation of such gas and oil pipelines, you can get an impressive increase in the volume of trade. However, it is the substantial risks that today are the main scarecrow for any investor of such a large-scale project. In order to connect Russia and India with a pipe for pumping energy carriers, it is necessary to carry out the most real construction of the century. The most optimal (if in this case there is an optimal one) land route is as follows: Russia-Kazakhstan-Turkmenistan-Afghanistan-Pakistan-India. And in this route, at least one point is already in doubt. This, of course, is primarily about Afghanistan. To start building an oil pipeline that can pass through the Afghan territories when the so-called “joint military contingent” (in fact, NATO) is about to leave Afghanistan, which is also an adventure. Even if the Americans in Afghanistan would have remained for "endts" years, then with the economic and political state in which the Central Asian state is now, investing in the construction of a transit oil and gas pipeline - the risk is not even in a square, but in a cube . To get access, forgive me, the Taliban, Schmalibes and all the rest will want to have free energy here ...

If in this chain of states we pay attention to Pakistan, which has a long-standing “friendship” with India, then even Islamabad can “sit on the pipe” at a convenient time to dictate its conditions to Indian “partners”.
In general, the mentioned route may begin to be implemented, but only in this case I would like to hear all the positive arguments that the expert commission will present. If the arguments are reduced to the phrases “finally built democracy and the established order in Afghanistan” and “eternal Pak-Indian friendly“ phi-phai ”, then nothing good will come of the pipeline.

Of course, you can lead the pipe without using the territory of Afghanistan and Pakistan. For example, through China, rounding the aforementioned states, and coming to India from the north. But here we must not forget about the obstacle the most natural - the Himalayan range. Laying the pipe between the peaks, the average height of which is 6000 meters - this is more serious than the transition of the army of Hannibal with elephants through the Alps ... You can, of course, cut the tunnels, as an option ...
So the Indian proposal to build a pipe from Russia to India today in the two ways outlined above is a deaf matter.

If India wants to receive Russian energy resources on a more substantial scale, then it is hardly necessary here to talk about the pipe. Where to more effectively pay attention to the supply of oil and LNG by sea. If in the near future new gas liquefaction plants will be built in Primorsky Krai and Sakhalin, then the ports of these Russian regions will be able to deliver energy to India. By the way, contracts on the supply of liquefied natural gas between Russian and Indian companies still exist. So, in particular, Indian GAIL, Petronet, Indian Oil Corporation Limited and GSPC wanted to buy LNG from Russia. Before 2030, GAIL should receive about 50 million tonnes of LNG. The rest of the companies mentioned will have to get 50 million tons of LNG each over the next 25 years. Such a project will be implemented in the event that new gas condensate enterprises are being built in the Far East of Russia as planned.

Here, too, there are risks: for example, the Strait of Malacca, where international pirate groups often manifest themselves, but still there are more chances to control the transit than, for example, in Afghanistan.

For the time being, a substantial increase in the supply of Russian oil and gas to India is only plans; the Persian Gulf countries are in this market in India - the United Arab Emirates, Saudi Arabia, and others.

That joint Russian-Indian energy project, which is already beginning its work - Kudankulam NPP. At present, one NPP power unit has been launched, the second is under construction. In Moscow, the leaders of Russia and India agreed on the intensification of work, which should lead not only to the commissioning of the second power unit as soon as possible, but also to entering the construction of another 4-x power units at Kudankulam. It should be recalled that the initial plans were ambitious and it was about building an 16-block NPP, but then the Indian side decided on such a scale for various reasons (including after the Fukushima-1 accident in Japan).

Now about military-technical cooperation. At the meeting between Putin and Singh, the talk turned to the sale of Russian weapons to India. In less than a month, an Indian delegation headed by Defense Minister Arakaparambil Kurien Anthony will arrive in Russia, which (the delegation) will have to accept for the Indian Navy the modernized aircraft carrying cruiser Vikramaditya - the former Admiral Gorshkov. Repairs and upgrades went longer than planned, but this did not discourage Indian partners from continuing to cooperate with Russia.

Before the meeting of state leaders in the press, there was information that Delhi was going to rent the second nuclear submarine of the 971 project Shchuka-B from Russia (the Indian side is already leasing one submarine of a similar project from the Indian side). However, after the meeting, no further details on the new lease agreement were received.

There was a Russia-India summit and at least one other topic of conversation - this was India’s desire to cooperate with the Customs Union of Russia, Belarus and Kazakhstan. The representative of the Indian Foreign Ministry said Delhi wanted to sign an agreement on comprehensive economic cooperation with the CU, which, quote: "would bring India closer to this unifying space." But what is meant by comprehensive economic cooperation in this context is a separate issue. If the removal of customs duties, then here, too, need to think - no less than with the pipeline.

Ctrl Enter
Noticed oshЫbku Highlight text and press. Ctrl + Enter
We are
Strangulation: the context, conduct and consequences of the American naval blockade of ChinaBRICS: friendship against the dollar
59 comments
Information
Dear reader, to leave comments on the publication, you must to register.