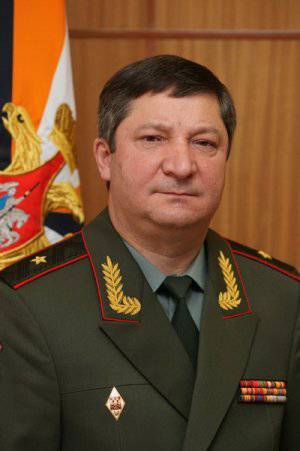 
- Khalil Abdukhalimovich, what factors influence the modern development of the communication system of the Armed Forces?

- In its development, the military connection went a long and difficult way, inextricably linked with history creation of the Armed Forces of the Russian Federation, changing forms and methods of their use, improving military art.

The experience of local wars and armed conflicts involving the United States and NATO has shown that the achievement of information superiority over the enemy within the framework of the “Network-centric War” concept is a priority for the next 20 years.

In the course of operations in Iraq, Yugoslavia, Afghanistan and Libya, coalition forces concentrated their efforts not on the defeat of enemy personnel, but on the destruction of the most important military-economic facilities of the countries and the communications infrastructure, both civilian and military.

Currently, based on the capabilities of modern forms and methods of conducting military operations, the management of the Armed Forces of the Russian Federation imposes strict requirements on the communication system for stability, survivability, interference immunity and reliability of operation under the conditions of influence on the control system and communications of various types weapons, hazardous factors of man-made and natural nature, all types of interference. In addition, the communication system must ensure that modern telecommunications services are provided to control authorities and officials of the Armed Forces and the Ministry of Defense for the exchange of information, including globally using a single satellite communications system and a radio communications system. 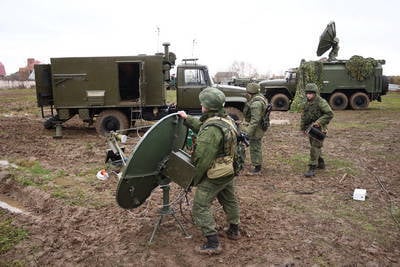 What will be a promising communication system of the Armed Forces of the Russian Federation?

- In the near future, it will be based on a unified automated digital communication system of the Armed Forces of the Russian Federation (OACS of the RF Armed Forces), which will include space, air, ground (field and stationary) and sea echelons, an automated control system and an information security system.

The space echelon will include groupings of spacecraft, ensuring the deployment of a space-based communication backbone operating on the principle of the Internet and providing all types of services (speech, data, video) to stationary and mobile subscribers of the Armed Forces of the Russian Federation.

The airborne train will include airborne complexes and communications equipment, including repeaters of various purposes, located on aircraft and flight-lifting means.

The automated communication management system will include a unified set of network services for interspecific, intergeneric, interdepartmental and coalition information services, an identification, addressing, synchronization and switching system.

Information security system is designed to implement the security, reliability and integrity of information at all stages of its transfer, storage and processing.

Such a principle of building a communication system will create the conditions for the operational deployment of an information-controlled network with high bandwidth, stability, availability and intelligence protection.

The communication system will be able to transform taking into account the operational tasks to be solved while maintaining the quality of the communication services provided and the continuity of management through the use of its individual elements depending on the prevailing situation.

- What work has been done in the Ministry of Defense of Russia on the complex equipping of command and control centers of the Armed Forces with modern equipment?

- Since 2009, a large-scale project is being carried out at the Ministry of Defense for complex equipment of communication centers of command and control centers of the Armed Forces of the Russian Federation with modern digital telecommunication and computing equipment. Its feature is the complexity and typical solution for equipping with various equipment (channel-forming, network facilities and subscriber devices). This provides the provision of necessary user services. These are high-quality open and closed telephone communications, access to automated control systems and an electronic correspondence exchange system, as well as additional features: audio and video conferencing, access to global information resources (Internet access). In addition, disparate control points are logically combined into a single departmental multiservice network.

Currently, digital telecommunications equipment is equipped with 989 facilities. This year, the 192 object is included in the existing network, of which the 33 object is moved to new locations.

In total, up to 2020, it is planned to equip more than 2.000 objects of the Ministry of Defense with digital telecommunication equipment.

- Until 2008, the field communication system of the Armed Forces of the Russian Federation was built on analog hardware. The principles of its construction were based on system-engineering solutions and approaches to the construction and operation of the control system developed in the 70-s of the last century.

The main option for the further development of field communication nodes is the modular construction option. In this case, the communication node can be represented as a set of modules connected in a certain way and organized. This, in turn, should not only simplify the access of officials to communication resources, but also improve the intelligence, survivability and mobility of communication centers and control centers as a whole.

Testing of technical solutions implemented in OCD was carried out in 2009 – 2012 in the course of operational-strategic exercises, and a positive result was obtained, which confirmed the correctness of the chosen solutions for the construction of a field digital communication system of the Armed Forces of the Russian Federation. From 2011, hardware "Redut-2US" are delivered to the communications troops.

Further development of radio-relay stations is planned taking into account the possibility of providing work in communication networks with packet switching, increasing the capacity to 310 Mbps (3.460 PM channels) and using noise-free modes in operation.

In 2012, the Ministry of Defense launched the creation of the Unified Satellite Communication System of the third stage (ECCS-3), built on modern principles of high-speed information transfer and unified hardware and software with the organization of inter-satellite communications.

ЕССС-3 should provide communication of the highest military leadership of the state and the Ministry of Defense with the required level of interference protection, information exchange in the paths of military technical systems and automated command and control systems, organization of satellite communication channels for the provision of modern communication services in the management of interspecific, heterogeneous and coalition groups troops (forces) and in the framework of the implementation of social programs for military personnel.

- Khalil Abdukhalimovich, is the supply of portable radio communications in the “serviceman - department” link supposed?

- Yes, for this purpose, the Ministry of Defense is developing a complex of multifunctional software and hardware radio tools to provide automated reconnaissance and noise-protected secret radio communications in the tactical control unit (TZU).

As a result of the performance of OCD, portable, wearable and baseline radio stations of the 6 generation will be developed. According to the stated characteristics, the complex of these radio facilities is not inferior to foreign analogues, and surpasses them in some indicators. It will ensure the transition from communication networks organized in accordance with existing control loops to self-organizing and adaptive networks, as well as expansion of the frequency range, its more efficient use and the introduction of new modes of operation.

- Are you planning to equip all units and divisions of the Armed Forces of the Russian Federation with means of access to the global Internet? How can this affect the level of secrecy?

- Work on equipping facilities of the Russian Ministry of Defense with computer equipment (SVT) connected to Internet service providers is already being carried out, with particular attention being paid to compliance with information security requirements. For example, CBT processing limited distribution information is not connected to Internet service providers.

At the same time, we should not forget that today it is difficult to find military personnel, including those serving in military service who do not have a personal mobile phone. At least 80 percent of them use phones that have the ability to connect to the global Internet.

To ensure the safety of state secrets in the troops, a complex of organizational and technical measures is carried out. In the first place - this is explanatory work among military personnel. Secondly, access to restricted areas with mobile phones is prohibited - they surrender at the entrance. Thirdly, if necessary, apply technical tools that block the basic functions of mobile devices. Other organizational and technical measures are being carried out aimed at preserving the secrecy and security of communications at the facilities of the Ministry of Defense. It all depends on the status of a military facility or a regime territory, on the information that is processed on them, and on other factors.
- How is the military now delivering classified information to its recipients?

- Along with the traditional methods of transmitting documentary media containing state secrets, the Ministry of Defense has created and used: the interspecific system of exchanging e-mail correspondence, which allows you to send information by e-mail in a secret form before the association inclusive; a closed segment of the data network that allows you to send information in a secret form by e-mail to a compound and a separate military unit; secure high definition video conferencing, which allows for the exchange of video and audio information between officials of the military administration of the Ministry of Defense of Russia, as well as other security ministries and departments.

- What means of communication are provided in the modern equipment of a soldier?

- As part of the work on the creation of a Unified Command and Control System at the tactical level, a unified wearable military service set has been developed, designed to solve combat command and control tasks in the “company - platoon - branch - military” unit. It provides the serviceman with navigation, orientation, target designation, fire weapon control, and also increases his combat capabilities, increasing survivability and mobility during combat.

- Today, a large number of ships of the Russian Navy perform tasks in various parts of the oceans. How is communication with naval sailors ensured and is videoconferencing possible with them?

- Indeed, the 2013 year is characterized by the intensive use of naval ships, the expansion of the range of their tasks and the complication of conditions for communication with ships in remote areas.

Along with traditional short-wave radiocommunication, satellite communications are widely used, which in some areas is the main, and sometimes the only effective form of communication that provides high-quality and covert information exchange with forces fleet, and allows the leadership of the country and the Ministry of Defense in real time to assess the situation and quickly set the task (up to a single ship).

Thus, in the summer of this year, videoconferencing was provided with the flagship of the Admiral Panteleev operative compound, with the Moskva guards missile cruiser and the large anti-submarine ship Vice Admiral Kulakov with the heavy nuclear cruiser "Peter the Great" in the course of performing the tasks of the transition by the Northern Sea Route.

Ctrl Enter
Noticed oshЫbku Highlight text and press. Ctrl + Enter
We are
The action “Military service under the contract is your choice!” In Rostov-on-Don: future contract servicemen, exhibitions and “Russian Knights”Day of the Military Communications Officer
6 comments
Information
Dear reader, to leave comments on the publication, you must to register.