France is forced to focus on exports 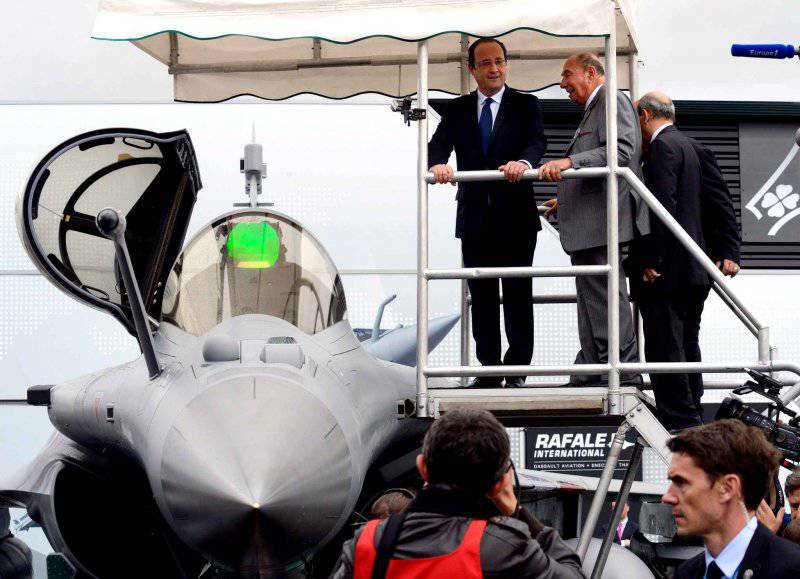 From Paris to Riyadh, everything is permeated with symbolism. Barely returning from Saudi Arabia, which he visited for the third time, French Defense Minister Jean-Yves Le Drian on October 8 was to appear before the Senate in order to defend the draft State Armaments Program (Loi de programmation militaire) on period 2014-2019 This is one of the methods to signal the French industry, which now has to rely more on exports than on an internal customer.


These negotiations are addressed to industrial concerns, which will have to tighten and stretch the delivery time of the weapons produced. The volume of purchases is reduced to fit into 179.2 billion euros during the 2014-2019 period. And for industry, this means a reduction in turnover and a reduction in personnel. And even if the military budget stabilizes at the level of 2013 for the period up to 2016 (31.4 billion euros), there will actually be a reduction in inflation.

The French military-industrial complex is hoping for the return of better times after 2017 in order to gain access to the military budget of 32.51 billion euros in 2019. Apart from the government’s commitment to sell Rafale fighters for export after 2016. By this date, the government plans to stop purchasing Dassault fighters , to redistribute the budget to the more necessary weapons systems. But in order to sustain such expenses, it is necessary to obtain additional funds (from the sale of real estate, the sale of state frequencies or assets) at the level of 5.9 billion euros over the entire period. An additional unknown is that industry doubts the government’s determination to keep the military budget intact.

Taking this HPV, according to Christian Mons (Chrisitian Mons), the government supervisor of military-industrial enterprises producing land-based equipment, “within five years we will see a reduction in 20000 jobs from 160000 employed in this sector, besides medium and small enterprises will suffer large losses ". But it will not be so noticeable, he continues, so “all this will be distributed” between almost 4000 small and medium-sized enterprises. “It will be easier for large concerns, as they can distribute staff within the group,” adds K. Mons.

Extending the construction of Barracuda submarines and FREMM frigates by DCNS will affect 500 jobs throughout the holding. The rocket industry will face a reduction in its turnover of 30-40%. This will affect 500 jobs from 10000 (5%) in MBDA. For the Safran group, the LG will result in lost profits in the amount of 150 million euros (out of 14 billion annual turnover) and a reduction of at least 500 jobs.

There is also no place for major programs in LG. According to Marwan Lahoud, Director of Strategy and Marketing at EADS, “without new programs, not only the production base, but also the technological level of our armed forces will not be at risk, and the export opportunities of our enterprises, which are a necessary counterbalance for their economic model, will shrink due to competition. ” He reported this to 10 September during a defense hearing.

He believes that it is necessary to squeeze the benefits of the budget for research and development, which reaches 750 million euros per year and prepare advanced projects. This refers to the UAV, cyber defense, heavy helicopters. “Not for the first time, the LG does not contain new programs. This has already taken place in 1995-1997. At that time, much was invested in R & D, ”Laud softens. But even if the programs "to some extent suffer from a bad image," due to their complexity, "you should not forget that only cooperation allows you to share development costs between several countries," emphasizes Antoine Bouvier, president of MBDA. "Obviously, the projects of the [military transport aircraft] Airbus A400M or the attack helicopter Tigre could not be implemented by one country."

You also need the presence of political will on the part of the Germans or the British, which is now somewhat weakened. It is also needed for the restructuring of the industry. Due to the fact that this does not occur, "there is competition in tenders, as was the case with submarines from DCNS and German TKNS," explains Jean-Pierre Maulny, Assistant Director of the Institute for International and Strategic Relations .

Thus, competition is intensifying in export markets. Everything happens under the slogan "Everyone wants to eat" - so, this is facilitated by the Americans, who have to compensate for the decline in US activity, or the emergence of new players. September 26 was a spectacular way out of China, which won the Turkish tender for the supply of air defense systems.

Ctrl Enter
Noticed oshЫbku Highlight text and press. Ctrl + Enter
We are
French defense minister says Paris may never pass the Mistral to RussiaAzerbaijan hosted a military parade
6 comments
Information
Dear reader, to leave comments on the publication, you must to register.