October 22 2013
281
Yesterday in Volgograd there was an explosion in a bus with passengers. Six people died, thirty-three more were injured. 3 criminal cases are initiated: under the articles "Terrorist act", "Murder", "Illegal traffic weapons". There is a consequence. According to preliminary data, the actress of the terrorist act is Naida Asiyalova. Today in the Volgograd region declared a three-day mourning. 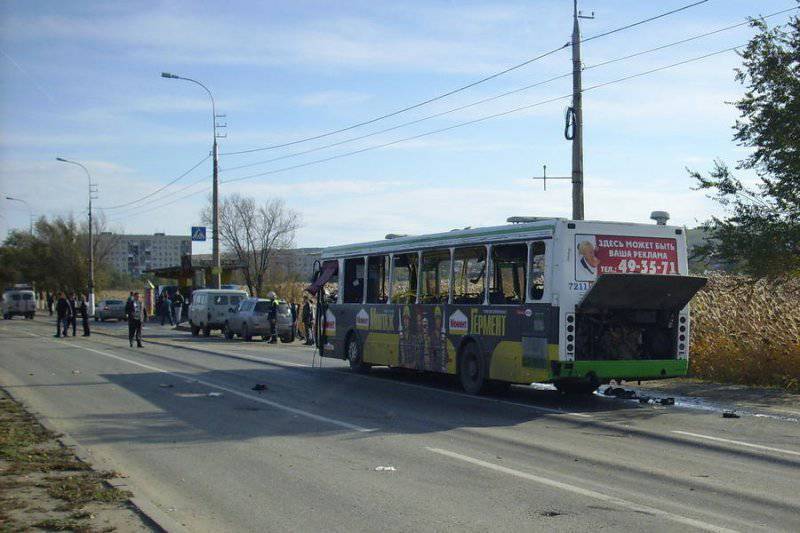 On the website of the Investigative Committee of the Russian Federation Last night an informational message appeared in which the following was noted. According to preliminary data, Naida Asiyalova, a native of Dagestan 1982, born in Dagestan, self-exploded an unidentified explosive device on the bus. Investigators believe that the woman in the hijab entered the bus at the bus stop - and almost immediately an explosion occurred.
According to the RF IC, 33 has turned to medical facilities. 28 of them are hospitalized. Eight are in intensive care.
RIA News" specifies that the bus followed the flight “State University - Yubileyny cinema”. The bomb exploded in 14: 05 when the bus was at the Lesobaz stop.
The plane of the Ministry of Emergency Situations is ready to evacuate seriously injured to the capital's clinics. "In the Moscow hospitals reserved beds," - said Interfax Deputy Mayor of the capital for social development Leonid Pechatnikov.
President Vladimir Putin offered condolences to the relatives of the victims of the terrorist attack and wished the victims a speedy recovery.
According to the representative of the Investigative Committee of the Russian Federation, Vladimir Markin, to Interfax, investigators continue to inspect the scene. Eyewitnesses and passengers who survived the attack are questioned. Records from surveillance cameras are being studied. Vladimir Markin said:
“According to preliminary data, a self-detonation was made by a native of Dagestan - 30-year-old Naida Asiyalova. According to information obtained by the investigators, this woman got on a bus at one of the stops, and almost immediately after that an explosion took place. This is also confirmed by the surviving passenger of this flight. ”

According to Interfax in the investigation department of the TFR in the region, the named woman recently converted to Islam and was the wife of one of the ringleaders of the bandit groups. Not far from the scene found her documents. The interlocutor of the agency said:
“Information is being checked that Naida Asiyalova, the wife of a resident of Moscow, Dmitry Sokolov, could have committed a self-detonation. According to operational data, they studied together in a Moscow university, she recruited him, Sokolov moved to Dagestan and moved to the underground position. Now he is wanted as a member of the Makhachkala gang. ”
The head of the press service of the governor of the Volgograd region Ekaterina Golod reported RIA News"that the condition of the victims in the 15 hospital of Volgograd was checked by the governor Sergey Bozhenov. The city has already arrived plane MES. In the near future, a consultation of Volgograd and Moscow doctors will be held. They will decide which of the victims to transport to Moscow. A spokeswoman for the press service added that the smallest patient - a child aged one year and 10 months - was transferred to the children's department of Volgograd's 7 hospital. Nothing threatens his life. 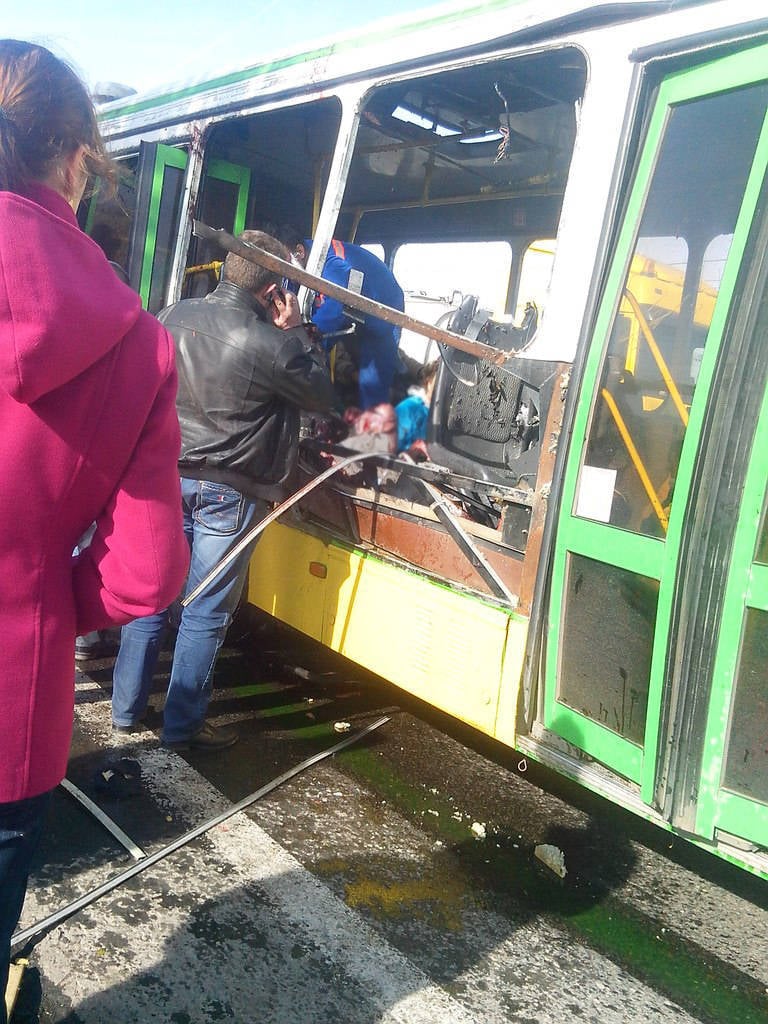 As for the other victim, an adult, whom Catherine Golod also mentioned, the doctors successfully removed a metal bolt from his heart. The head of the press service said:
“The explosive was stuffed with striking elements, and the bolt hit the man in the heart. The operation was successful. Doctors give a favorable prognosis for this man. There are no forecasts for other affected people yet, because all of them have a serious condition, and all of them are in a state of concussion. ”
October 21 evening on Governor Sergey Bozhenov website a list of people who are currently in medical institutions of Volgograd was published. A total of 28 people are on the list, including 11 teenagers and 1 children. The age of the oldest victim is 86 years.
As indicated Life News, the investigators will be able to establish the identity of a suicide bomber with maximum accuracy only after genetic examination. Police experts have already visited the village of Gunib and took blood samples from Asiilova’s own mother. About this agency informed a source in the Dagestan police.
Naida Asiyalova has not lived with her family since 2010. All because of her extremism. Relatives abandoned their daughter three years ago. Naida didn't even come to my father's funeral. She had neither a permanent job, nor a permanent residence. According to the investigators, she lived in Khasavyurt, Kizlyar, Makhachkala and maintained contacts with the widows and wives of the militants.
According to the same Life News, at the time of the terrorist attack, Naida Asiyalova and her husband, Dmitry Sokolov, were on the federal wanted list on suspicion of terrorist activity. 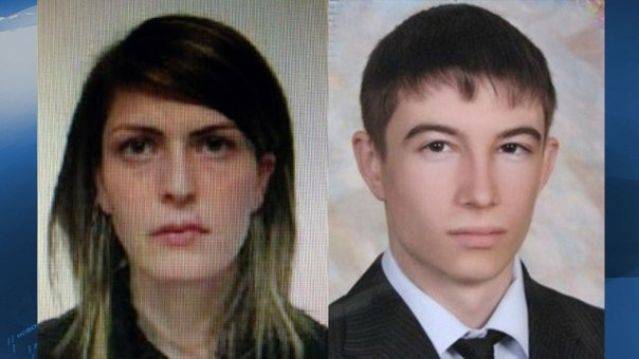 Asiyalova was known as an active recruiter for Wahhabism supporters. She met Sokolov in Moscow, then they went to Dagestan. It is not excluded that Sokolov prepared the shahidi belt for Amathurhman (Asiyalova is also known by this name). It is also reported that due to severe bone disease, Asiyalova took tranquilizers and painkillers.
As for Sokolov himself, he joined Wahhabism in 2010. With Islam, he took the name Abdul Jabbar. In Moscow, he attended mosques, where he communicated with extremist-minded parishioners.
“21-year-old Dmitry Sokolov and 30-year-old Naida Asiyalova met in Moscow, where they studied together in Arabic language courses. An experienced recruiter immediately noticed a quiet and pliable young man, who by that time was already actively interested in the North Caucasian bandit underground. Sokolov, before meeting with Asyalov, independently mastered an explosive affair.
In November 2010 of the year, he went to Dagestan without the knowledge of his parents, and in 2012, in secret from their parents, the young people got married. Sokolov converted to Islam and went after Asiilova to Dagestan, where he soon became a demolition man at the militants. ”
According to the intelligence services, Life News notes, the terrorist act was organized by militants from the Makhachkala sabotage and terrorist group. Headed the operation 29-year-old Arsanali Kambulatov.
“Currently, Sokolov is the main demolition man in the Makhachkala gang,” a source in the special services of Dagestan told Life News. “Sokolov’s parents filed him as missing as last year, although they now know perfectly well where their son is and what he does.”
The explosive device involved by the suicide bomber was two TNT sticks and two grenades filled with screws and metal chips.
Vladimir Zhirinovsky said that the attack in Volgograd could be revenge for the riots in Biryulyovo. He said this in an exclusive interview. Life News:
“I do not exclude that this terrorist act is revenge for Biryulyovo. Someone paid, and the attack was committed in Volgograd. They could come to Volgograd, find the right people there and accomplish the whole thing. Perhaps this was done by people from the North Caucasus, Dagestan. I think that it is necessary to further strengthen the FSB bodies and give them more rights in the fight against terrorism in Russia. ”
Why is Volgograd? The leader of the Liberal Democratic Party explained:
“For a long time there have been no terrorist attacks in Russia. Apparently, a certain group prepared for this, and it occurred, although many measures had been taken before that and many terrorist attacks were prevented. In Volgograd make the attack easier. Compare: in Petrozavodsk, Kostroma or in the Urals there were no terrorist attacks, and there is real silence, but the south of Russia: Rostov, Krasnodar, Volgograd, Astrakhan - many people from the southern regions of our country live there, therefore there is fertile soil for the terrorist attacks. Volgograd is the weakest link among the southern regions. I believe that there is an urgent need to strengthen law enforcement agencies, and the Liberal Democratic Party has always advocated that there are more patrols on the streets, more raids and more searches have been conducted. ”
Families of those killed in the attack will receive financial assistance in the amount of one million rubles. Severely injured pay 400 thousand rubles. The governor Sergey Bozhenov reported about it, transfers RIA News".
The terrorist attack in Volgograd was convicted internationally.
As passed correspondent ITAR-TASS Oleg ZeleninUN Secretary-General Ban Ki-moon “condemned in the strongest terms” the terrorist attack in Volgograd. “The General Secretary is saddened by the attack committed ... on a bus in the Russian city of Volgograd, and his thoughts are about the victims and their families. We condemn such acts of violence in the strongest terms, ”said the Deputy Representative of the Secretary General, Farhan Haq.
"Military Review" grieves with the relatives of the victims and wishes a speedy recovery to the wounded.
Review prepared by Oleg Chuvakin - especially for topwar.ru
Ctrl Enter
Noticed oshЫbku Highlight text and press. Ctrl + Enter
We are
Results of the week. "Mourning in the heart, not in clothes"Donetsk and Russia: common mourning, total sadness
281 comment
Information
Dear reader, to leave comments on the publication, you must to register.