October 22 2013
7
One of the main problems of mortars is their relatively low rate of fire. To increase the rate of shooting, various ideas are regularly offered that are related to the use of special loading mechanisms, etc. systems. However, such equipment leads to the complexity and cost of construction, which may not suit the potential customer. In the mid-eighties of the last century, the Austrian company NORICUM Maschinenbau und Handel GmbH proposed a new way to increase the rate of fire of the mortar. 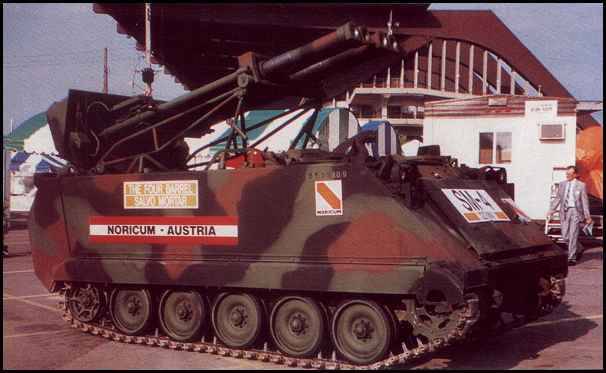 The original project was called SM-4. The title reflected the main feature of the project: SM letters were decoded as Salvo Mortar (“salvo fire mortar”), and the number indicated the number of barrels. The project was supposed to increase the rate of fire by using a block of several trunks. Using this approach to architecture weapons it was planned to significantly increase its combat effectiveness.

During the SM-4 project, it was intended not only to achieve high combat performance, but also to reduce the price of the finished combat vehicle. Therefore, it was decided to make a self-propelled mortar on the basis of a truck Unimog U1700L. For the equipment of the base chassis they created a special platform to which all elements of the artillery unit were fastened, as well as hydraulic outriggers. The latter were used to stabilize the combat vehicle during firing.

On the platform were mounted constructions of the original mast, driven by hydraulic cylinders. The system of beams, cylinders and cylinders allowed for a short time to bring a multi-barreled mortar into a combat or marching position. To do this, the hydraulics lowered the block of trunks with breeches to the ground or raised them up to the platform. To transfer the recoil energy to the ground, a block of trunks was equipped with a base plate of 2 square. m with advanced coulter. Mortar attachment mechanisms made it possible to rotate a block of barrels in a horizontal plane within a sector of width 28 °. The elevation angle was adjustable from 45 ° to 79 °. 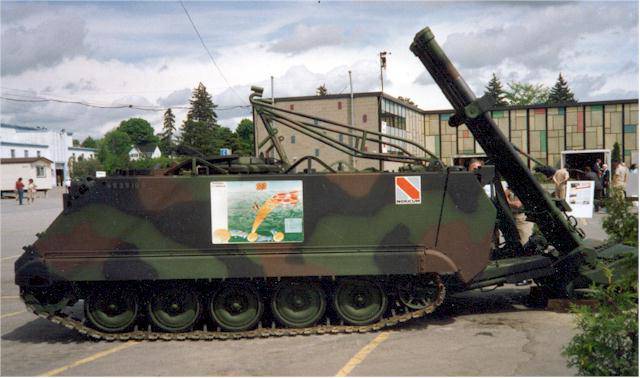 The fighting machine NORICUM SM-4 carried four mortar barrels of 120 mm caliber, which had no rifling. While awaiting export orders, the development company ensured that the mortar was compatible with all relevant ammunition manufactured to NATO standards. In the breech of all four trunks housed a percussion mechanism with a pneumatic drive. In this case, the breech had no means for loading, since the multi-barreled mortar was executed by muzzle-loading. In the future, this feature was one of the factors that determined the fate of the entire project.

In the mid-eighties, the first prototype SM-4 self-propelled mortar was built based on the Unimog wheeled chassis. A combat vehicle with a total weight of about 7 tons showed fairly good characteristics of mobility and firepower. The Austrian designers managed to make a relatively light artillery system, the dimensions and weight of which completely fit into the capabilities of the base chassis. In addition, the combat vehicle could be transported by military transport aircraft C-130 or CH-47 helicopters (on the external load).

Test shooting confirmed the stated characteristics. Four barrels with a length of 25 calibers made it possible to mine mines at an initial speed of about 510-520 m / s. During the tests, the maximum firing range was identified - 11,5 km. Depending on the task, the SM-4 mortar could fully justify its name and fire two or four shots at a volley (four shots took about one second). In addition, it was possible to fire a series, with a small interval between shots. The pneumatic percussion mechanism and fire control system allowed the calculation to choose the most suitable mode of fire. The ammunition of the combat vehicle was 60 min. The calculation of the mortar consisted of three people. 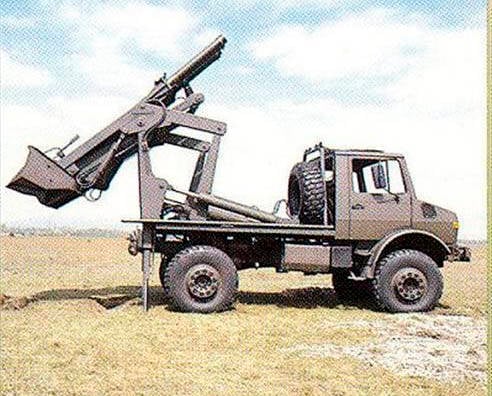 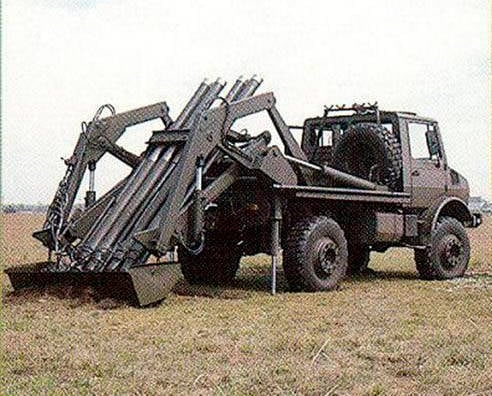 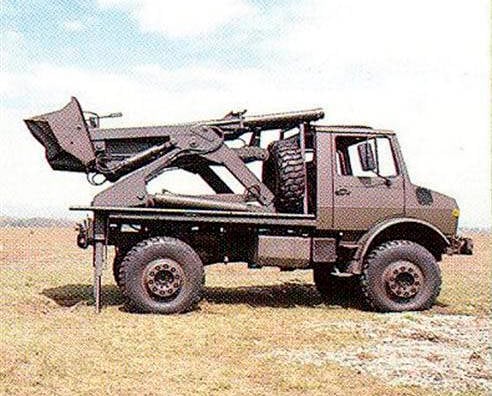 During the tests, the self-propelled mortar NORICUM SM-4 showed not only the positive side. Test shooting allowed to reveal a number of flaws. First of all, the claims were caused by the not very successful lafter construction. The hydraulically-driven frame design did not provide the required stability of the barrels when firing. For this reason, the second prototype mortar SM-4 received an updated carriage. Its design was noticeably simplified, several large parts were removed from it. In addition, the hydraulic cylinders were transferred to the middle part of the barrel mounting system. The changes have a beneficial effect on the rigidity of the structure and, consequently, on the stability of the machine and the accuracy of shooting.

However, such changes could not fix the most important problem of the mortar identified during the tests. The combat vehicle did not have any mechanized means for supplying mines to the barrels, due to which they had to be manually charged. Due to the specific design of the mortar and its mast, under certain conditions, such an operation turned into a rather complicated task, since the loader had not only to lift heavy ammunition, but also to reach out to place it in the barrel. To solve this problem, it was supposed to create an automatic loader. 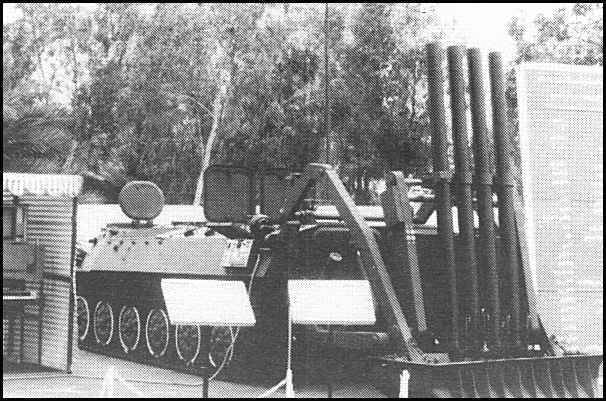 The original architecture of multi-mortar did not allow to achieve a significant increase in the rate of fire in comparison with existing systems of similar purpose, equipped with only one barrel. The rate of fire in firing a volley or a line really looked promising. However, it took time to recharge all four barrels. Due to the nature of the barrel and the convenience of the crew, the loading process leveled all the advantages over single-barrel mortars of the same caliber. Thus, in practical rate of fire, the SM-4 mortar was no different from other weapons of its class.

According to some reports, the original project NORICUM SM-4 was intended for the Austrian armed forces. It was assumed that the new self-propelled mortars will replace the obsolete towed howitzers M101. The Austrian military is really interested in a promising project. However, no contracts followed. For a number of reasons, the Austrian Ministry of Defense refused to purchase. There is every reason to believe that the refusal of the Austrian military was primarily due to the lack of loading mechanisms, as well as the delay in work in this direction without any visible success. 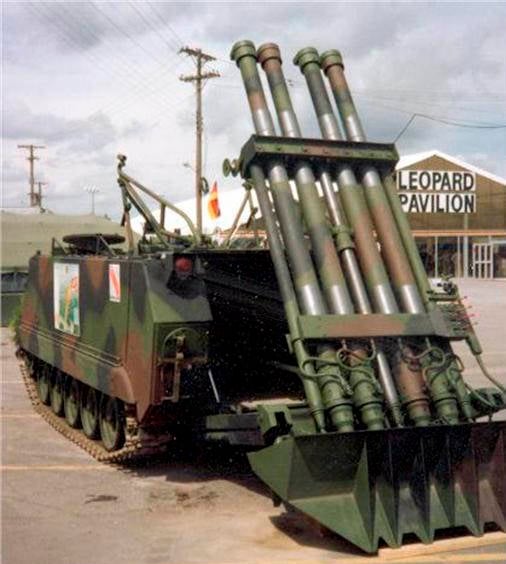 Wanting to interest potential customers in the face of foreign countries, the company NORICUM Maschinenbau und Handel GmbH has developed a new version of the self-propelled mortar SM-4, different from the base chassis and a number of structural elements. The American-made M4A113 armored personnel carrier was chosen as the base for the SM-2. However, in this case, the interest of potential buyers was limited to the inspection of exhibition samples and familiarization with promotional materials.

According to official data, the Austrian company NORICUM has built only a few prototypes of self-propelled mortar SM-4. Serial production of combat vehicles with a four-barreled artillery system caliber 120 mm did not start. However, shortly after the end of hostilities in Iraq, information appeared on weapons and military equipment that had been taken up by NATO troops as trophies. Among the samples shown was an armored tractor MT-LB of Soviet production, equipped with a strange artillery unit with four barrels and a characteristic base plate. Whether this sample has anything to do with the Austrian mortar SM-4 and, if so, how exactly it appeared in Iraq is unknown.

Ctrl Enter
Noticed oshЫbku Highlight text and press. Ctrl + Enter
We are
Overview of artillery. Part of 3. Heavy mortars and ammunitionForeign self-propelled mortars caliber 120 millimeters
7 comments
Information
Dear reader, to leave comments on the publication, you must to register.