October 22 2013
97
Annotation: The AK-74 Guide recommends a direct shot at the chest figure, but there are no chest targets on the battlefield. Fire duel must be waged with a head goal. Therefore, it is necessary to fire to the range of 300 with a direct shot with an “3” sight, which will allow the machine gunner to conduct a fire duel even with the help of a standard mechanical sight.

The 1 part of the machine gunner must hit the head piece.

In the past two decades in hostilities, where our rifle weapon was used against US-made small arms, the loss ratio is not in favor of our weapons.

But it is generally recognized and confirmed by tactical and technical data that there is no superiority, for example, M-16 or M-4 itself over Kalashnikovs. On the contrary, the legendary reliability of AK gives a head start against any opponent. Therefore, in our country, the unsatisfactory ratio of losses is usually attributed to poor training of troops who fought with our weapons.

However, along with weapons, we also supply manuals for their use, our military schools and academies, and our advisers teach our weapons recipients how to shoot. Therefore, it is unacceptable to dismiss such results from the combat use of our weapons and our methods of shooting.

As we see, in the first paragraph of Art. 155 declared the undisputed position necessary for maximum probability of hitting the target. After all, as capaciously stated in the monograph “Efficiency of firing from automatic weapons” [2]: “3.5. The degree of combining the midpoint of hits with the center of the target determines the accuracy of shooting. "

Therefore, the question of how much happens in combat breast goals, is the main issue for assessing the effectiveness of our main method of automatic firing.

The chest figure, whose height is 0,5m, is equal in height to the arrow in the manufacture for prone shooting “with elbows at shoulder width” on a completely flat surface, for example, in the middle of the asphalt area. And how many targets in combat that take up a firing position on a completely flat platform?

What firing positions teach soldiers to occupy in foreign armies? Let us analyze it in the document «Manual for planning and executing training on the 5.56-mm M16A1 and M16A2 rifles» [3], which can be translated as "Guidance on planning and conducting training with 5.56-mm rifles M16A1 and M16A2" (hereinafter translation author). This guide was developed on the basis of the US Army Infantry School at Fort Benning (Benning) for commanders and instructors of the US Army [3, PREFACE]. This guide teaches soldiers from the US Army and other countries that have an M-16 rifle in service.
Here is the main requirement of this firing position guide:

«IMPORTANT:… Although the shooter must be high enough to observe all targets, it must remain as low as possible to provide additional protection against enemy fire ”[3, FIRING POSITIONS].

“When taking up a position, a soldier adds or removes soil, sandbags, or other types of parapet to adjust its height,” and only then takes the ready for shooting behind this parapet. And specifically stated "put your elbows on the ground behind the parapet" (and not on it) [3, Supported fighting position]:

That is, if the American soldier has a few minutes, he is also obliged, out of the blue, to build a parapet and take cover behind him. Moreover, be sure to hide behind a stone or other natural parapet:

“The 3-15 figure shows a soldier shooting above the ridge of the roof and just popped out just enough to hit the target” [3, MOUT Firing Positions]:

“The 3-17 shape underlines the need to remain in the shadow while firing from the window, and supports the requirement to hide” [3, MOUT Firing Positions]:

As we see, shooting from a window, a soldier of the US Army does not put his elbows on the windowsill, but is behind the windowsill and uses it as a shelter. If in Figure 6 to follow the direction of shooting (down the approaches to the house), it becomes clear that the enemy can see only the head and shoulders of the shooter, but not his chest.

There is also a position for shooting from a level ground in the [3] Handbook. In this position, the height of the arrow is reduced in the following way:
- at first they force the “non-shooting” hand to hold the rifle just for the fore-end, but not for the magazine. As a result, this arm is pulled out and the “non-shooting” shoulder is lowered;

Here we need a comparison with our lying position: 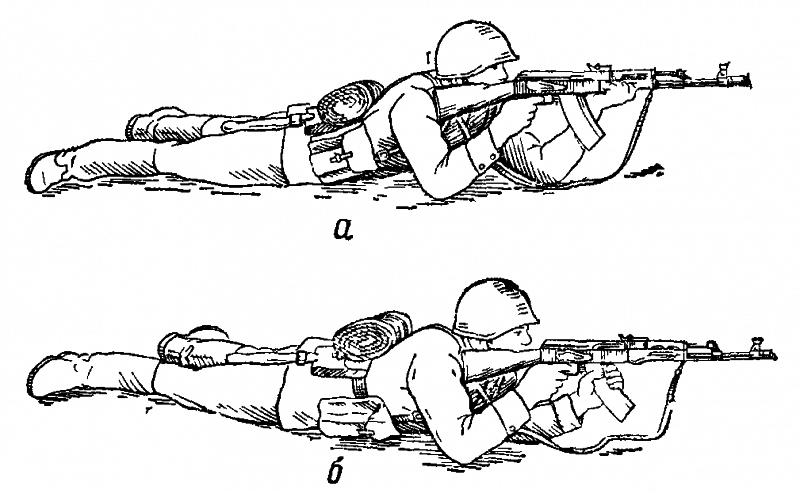 From the figures 7 and 8, you can see that our shooter with AK-74 is higher than the shooter with M-16. This is due to the installation of elbows at shoulder width, which leads to the rise of the shoulders and head to the level of the chest figure. And it is precisely in this figure (measured according to our Guide) that we learn to shoot our machine gunners.

But in the US Army, the only position in which they do not care about lowering the silhouette is the standing position. But it is not intended for a fire duel, but for “observing the firing sector, since it can be adopted quickly while moving” [3, Standing position].

And even when shooting from a knee, which is used only when it is necessary to climb “over low grass or other obstacles” [3, Kneeling supported position], the “non-shooting” elbow is never placed on the knee, but necessarily “moves the knee forward” [3, Kneeling supported position], as a result of which the head and shoulders of the arrow are lowered and the figure seen by the enemy over the obstacle decreases:

Thus, in the US Army there is not a single firing position in which the American soldier for the enemy would be a nursing target; Only the head target in a fire duel or growth while moving.

And in our army, people who have been under fire, too, are taught to reduce their silhouette as much as you can.

The author of this article in the 9-10 classes of the school (1975-1977) had an initial military training conducted by veteran of the Great Patriotic War, Colonel Dmitriev. He taught in this way: “In battle, before you get up for a run, you need to put up a shelter where you will run: at least a knoll, behind which you hide, at least a hole, into which you will fall. You lie down in front of the enemy - killed. "

And recently, on the website “Military Review” in the article “Bringing the head to a normal battle” there was generally a remarkable position for firing real fire at distances to 1 / 10: 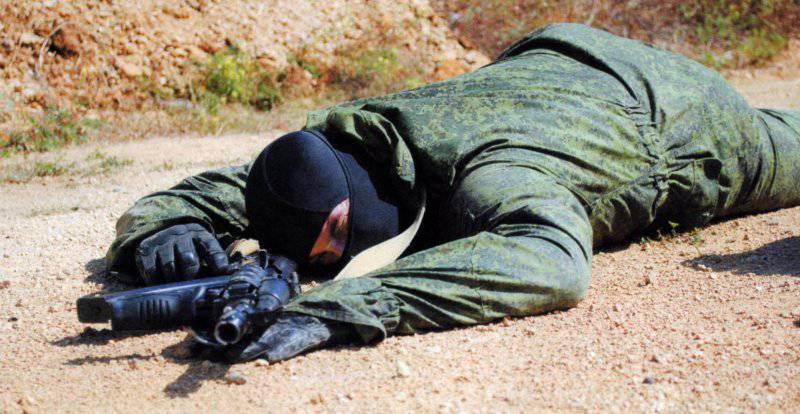 The 10 “pruning” shooting is the lowest visible arrow silhouette. When aiming, shooting is very accurate. ”- [6].

Indicative exercise "Tumbler", proposed by the author of this article. From 30 shots with a change of position for each shot, with a backpack weighing 30 kg, for 1 minute 50 seconds, from 80 meters it is proposed to get thirty times into A4 format sheet (recall, 210Х297mm), that is, into an almost exact copy of the head figure No. XXUMX . Surely, "Roly-Poly" - practicing action when ambushed. And quite rightly, the author of this exercise believes that since the organizers of the ambush had at least a few seconds to take up positions, they would see no other goals than the head ones that were ambushed.

So, the armies of the whole world teach their soldiers to take up a firing position "high enough to watch all targets, but remain as low as possible." Therefore, in firing duels, the submachine gunner with the Kalashnikov practically never sees breast targets. Only head figures No. 5 or No. 5 from our “Shooting Course” [4]: 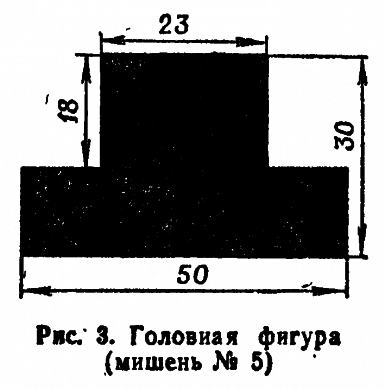 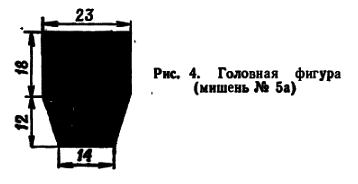 And it is precisely in such - head - targets that our submachine gunner shoots with a direct shot for the chest figure. What this leads to is discussed in the second part of the article.

The author of the article is Viktor Svateev, reserve officer.
E-mail: [email protected]

Ctrl Enter
Noticed oshЫbku Highlight text and press. Ctrl + Enter
We are
The backlog of Russian rifle scopesThe gunner must and can hit the head piece (Part of 2)
97 comments
Information
Dear reader, to leave comments on the publication, you must to register.