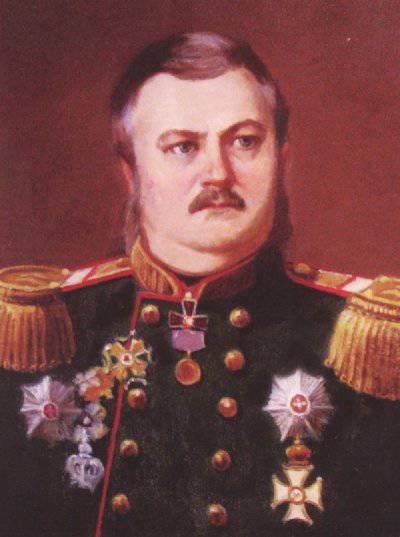 Under this name the publishing houseWeapon and Technologies of Russia ”(general director - S. Osinin, chief editor - N. Spassky) published the book by Pavel Kachura about the outstanding Russian rocketman of the mid-XIX century Konstantinov.


The future devotee of rocket science was born in early April 1819 of the year in Warsaw. His father was the Grand Duke Tsarevich Konstantin Pavlovich Romanov, brother and viceroy of the Russian emperor Alexander I in the kingdom of Poland, and his mother was French actress Clara-Anna de Loran. At birth, according to Orthodox canons, the boy was named Konstantin Konstantinovich Konstantinovich.

In 1831, the famous Polish uprising began. The Grand Duke gathered in Russia, but on the way he fell ill with cholera and died in Vitebsk. 13-year-old Konstantin together with his mother and sister Constantia (her father was also the crown prince) settles in St. Petersburg. In January, 1834, fulfilling the will of the late Grand Duke, the trustee of the family, Prince I.A. Golitsyn identifies 15-year-old Konstantin as a cadet to the prestigious Mikhailovsky Artillery School (in the future Mikhailovsky Artillery Academy).

The first school commander was a combat artillery general, a rocket science researcher A.D. Zasyadko. Konstantin studied well, and therefore, having graduated from the 1836 year of the “fourth in the list” school, was left to further improve his knowledge in the higher classes of the artillery school. In 1837, "for distinction in the sciences," the graduate was made "into a senior officer class": they enlisted in the rank of ensign in a guards artillery battery. Then he was adopted by Prince Ivan Aleksandrovich Golitsyn and gained a new middle name - Ivanovich.

In 1840 – 1844, Konstantinov works abroad as part of a delegation sent “for collecting useful information, to related artillery”. During a business trip, an officer opens an account of his inventions - he creates an electroballistic device (chronograph) designed to measure the speed of an artillery shell at any point in the trajectory. He allowed to measure time intervals with unprecedented, almost fantastic accuracy to 0,00006 seconds.

Upon returning to Russia, a young scientist develops a diopter for hinged cannon firing, making a number of improvements to the firework technique. His interests in artillery are varied, differ in novelty. Soon for his actions Konstantin Ivanovich receives the Order of St. Vladimir 4 degree and monetary reward.

Since September, 1846, the officer again goes abroad. There he publishes the formula of a ballistic pendulum rocket for measuring the thrust of a rocket powder engine. With it, it was possible to determine the influence of the shape and design of the rocket on its ballistic properties. Thus laid the scientific basis for the calculation and design of missiles.

The pendulum was built on a missile test site on the Volkov field in Petersburg, and in October 1847 was tested in the presence of members of the Military Scientific Committee, who praised it for its measurement accuracy and ease of calculation. And this was at a time when the French engineer and mechanic Arthur-Jules Morin, who was well-known in the middle of the 19th century, determined the thrust force with a conventional dynamometer. And the creator of the combat missiles Austrian Major General Baron Vincenz von Augustin - with the help of ordinary lever weights with weights. Moreover, already in the twentieth century, the Soviet scientist Zander, unable to use the invention of Konstantinov, measured the thrust of his rocket engine using the same lever weights.

Today, scientists recognize that the methodology for studying the ballistic characteristics of rocket engines using the Konstantinov pendulum is a prototype of modern fire tests.

5 March 1850, by the highest decree, Colonel Konstantinov is appointed commander of the St. Petersburg Rocket Facility, Russia's first industrial enterprise for the production of combat missiles. Since then, its activities are almost entirely devoted to the development of rocket production. Konstantin Ivanovich turns the handicraft enterprise into a real defense plant. He conducts experiments with military missiles in order to increase the range of the flight and the accuracy of the fall.

In 1853, the Crimean War began. A missile facility under the leadership of Konstantinov is preparing, according to his technology, combat missiles for the needs of the army in the field. Many in the military department resisted their use, and it took Konstantin Ivanovich a lot of effort to get the missiles delivered to the fighting Sevastopol.

In 1856, Konstantin Ivanovich publishes the detailed work "Aeronautics", where for the first time in the world he is considering the idea of ​​using rocket engines for movement and control of a balloon. In 1857, the work of Konstantinov appeared in the “Sea Collection” with an analysis of proposals related to scuba diving, including those received from the well-known Russian engineer Adjutant General K.A. Schilder, who used military missiles on the world's first all-metal submarine.

In 1860, Konstantinov lectures on "Missiles" at the Mikhailovsky Artillery Academy. His lectures are published in Paris in French. At that time, it was the only fundamental monograph in the world on this topic. She is highly regarded in academic circles, including the Paris Academy of Sciences. For her, Konstantinov was awarded the prize of the Mikhailovsky Artillery Academy.

The missile officer applies his talent, skill, experience, and irrepressible energy so that scientific discoveries find practical implementation. From the beginning of the 1850-s to the 1859 of the year, being already the head of the St. Petersburg rocket institution, Konstantinov painstakingly develops the design of a new advanced rocket factory, creating highly mechanized and automated equipment for it, searching for new optimal designs of combat missiles and improving their manufacturing technology. With his active participation, the choice was made of the site for the construction of a new plant - the city of Nikolaev.

Created by Konstantinov missiles were widely used in the conduct of hostilities. There are known facts of the use of missiles during the campaign of Russian troops in Turkestan, during the Crimean War in the defense of Sevastopol, in battles with Turkey in the Caucasian theater of operations.

In 1860, Konstantinov offers the military department a 4-inch rocket with a range of up to 4 thousand meters. Its parameters and the lightness of the rocket machine (for cavalry Konstantinov designed the machine is not heavier than an infantry gun), maneuverability, ease of production completely compensated for the smaller, compared with the fire of the barrel artillery, the accuracy of the missiles. The asset Konstantinova - and two-chamber rescue missile, which was successfully used to rescue people in shipwrecks up to 1944 year.

In 1864, Konstantin Konstantinov was promoted to lieutenant general. Then he went to Nikolaev - to the city of his last missile creation. There, on the spot, the "chief rocket pilot of the Russian Empire" directly supervised the construction of the Nikolaev Rocket Plant. By the end of 1870, the buildings of the plant were almost completed, equipment was installed. But live to the opening of the rocket institution Konstantinov did not happen. On the night of January 12, 1871, Konstantin Ivanovich died suddenly at the age of 52. 14 January 1871, his ashes were buried in the village of Nivnoe, Mglinsky district, Chernihiv province, in the estate of the husband of the elder sister of Constance A.F. Lishin

The great Russian rocket engineer is the author of more than 100 scientific papers and 20 inventions on various issues of artillery, small arms, pyrotechnics, gunpowder, rocket production, scuba diving and aeronautics. During his lifetime, he enjoyed great prestige among military specialists and prominent scientists from various branches of Russia and Europe.

Now the name Crater on the far side of the Moon is named after Konstantinov. His name is one of the streets of Moscow. In Russia, there is a commission to perpetuate the memory of the glorious son of Russia and his glorious family. It is headed by Marshal of Artillery V.M. Mikhalkin. The commission is doing a great deal of work to popularize the tireless activities of the devotee of rocketry. And the fundamental work published under the title “Chief Rocket Launcher of the Russian Empire” can rightfully be considered a peculiar monument to Konstantinov. The book, saturated with illustrations, not only tells about a large Russian rocket ship, but also fully and fascinatingly represents the development of the entire rocket business and military construction in Russia in the 19th century.

Ctrl Enter
Noticed oshЫbku Highlight text and press. Ctrl + Enter
We are
Alexey Arakcheev - the leader of the conservative "Russian Party" in the 1820sChief rocket pilot of the Russian Empire
4 comments
Information
Dear reader, to leave comments on the publication, you must to register.