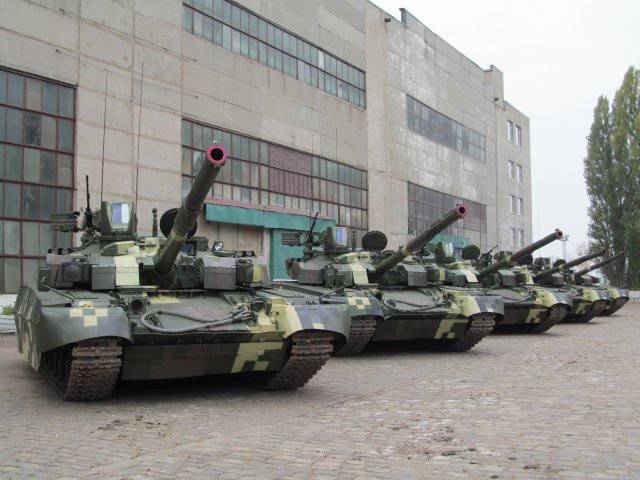 Despite the hype that has not subsided around the supply of BTR-4 to Iraq, Ukrainian tank builders have once again demonstrated their ability to produce new models of heavy military equipment, namely - tanks. The other day, the Malyshev Kharkiv Plant handed over the first production batch of Oplot tanks to the Thai military. At present, 32 Thai servicemen are undergoing training on the maintenance and control of Oplot tanks at the Morozov Design Bureau. It is assumed that combat vehicles will be sent to the customer before the new year.

Recall that in September 1 2011 representatives of the Thai Armed Forces and the management of Ukrspetsexport Group of Companies signed a lucrative contract for Ukrainian gunsmiths to supply 49 units of the newest battle tank Oplot. The contract amount exceeds $ 200 million. The main contractor is the Kharkov plant named after Malyshev, and technical support is provided by enterprises that are part of Ukroboronprom.

Before signing a contract with the Ukrainian side, Thailand considered several options for tanks offered by global manufacturers. Among the options studied were the German tank Leopard 2A4, the South Korean K1, the Russian T-90, and the Ukrainian Oplot. Thai military experts have recognized the cost of the German tank too high. Why exactly the Ukrainian tank was chosen is not exactly known. There is an assumption that the Ukrainian combat vehicle was chosen because earlier 96 Ukrainian BTR-3Е1 had already been supplied to the ground forces of Thailand, and Thailand has the intention to additionally purchase 120 units of the same armored personnel carriers.

In April, 2012, the Kharkov tank builders began to fulfill the order. And 26 June 2013, the factory workers presented the first serial tank "Oplot", designed for the Thai army. The demonstration of the combat vehicle was held in the presence of the commission of the Royal Thai Army, headed by the commander of the armored forces of Thailand B. Sansavat. Representatives of the customer also discussed with the tank manufacturer the course of fulfillment of obligations under the concluded contract. Since the first batch of armored vehicles was prepared for shipment to Thailand with a delay of a month, it can be assumed that the manufacturing company faced significant difficulties. It is possible that the delay is associated with problems in the resumption of tank production after a ten-year break.


In addition, it should be noted that the information that the five first tanks for the Thai army are converted prototypes of the T-1990UD tank modified by Kharkov tank builders in 80 was “walking” in the network. If this information is correct, then the big question is whether the plant is ready for them. Malysheva fulfill the terms of the contract in full and on time.

Tank "Oplot" was designed to meet modern requirements for armored vehicles. A lot of technical innovations have been applied to equip it. For example, to enhance the security of a tank, the latest Dynamic Protection System Knife-2 is installed on it, which is able to withstand armor-piercing and cumulative projectiles. Since the protection architecture "Knife-2" is built on a modular basis, it can be improved almost constantly, with the development of dynamic protection technologies. According to the manufacturer, several technical know-how was applied when creating the Oplot armor protection.

In addition, Oplot has significantly improved its sighting system - a multichannel panoramic-sighting and observation complex PKN-6, equipped with day and thermal imaging channels, as well as a laser range finder, has been installed. The use of these innovations will improve the observation of the terrain - the target can be detected through the visual channel within 5,5 km, and through the thermal imaging channel within 4 km. But expanding the capabilities of the fire control system led to an increase in tank mass by 400 kg.

Tank "Oplot" equipped with the latest development of engine builders - engine 6TD-2E. The control levers are replaced by a steering wheel, which greatly simplifies the driving of a combat vehicle. The tank has a navigation system based on NAVSTAR and GLONASS.