The gun duel between Navalny and Rogozin, or Why did the Glocks go up ...

October 22 2013
178
Some time ago, it was reported that a special batch of Glock pistols was planned for the special units of the Russian Defense Ministry. Two modifications of these Austrian pistols, namely Glock-17 and Glock-26, are subject to purchase. In this case, purchases are carried out through an open auction through the automated trading system of Sberbank - ETP Sberbank-AST.


If we talk about the technical characteristics of this Austrian weapons, most experts are inclined to call Glock one of the best modern pistols, which have indisputable advantages over the products of other manufacturers (including domestic ones). Top scores "Gloki" received for their reliability, which manifests itself even when shooting under water. Unlike many other pistols, this weapon is capable of hitting a target under water (albeit at a distance of no more than 2,5 m) without blow-up of the barrel and the danger of harming the shooter himself. This possibility is due to the use of special cartridges and a special percussion mechanism.
In addition, Glock can fire after heavy pollution during a sandstorm.

Today Glock-17 pistols are actively used by armies around the world. If we talk about the countries that have already adopted such pistols, here, besides Austria itself, many NATO countries should also be mentioned. They (pistols) are also used by the secret services of India, the USA, Saudi Arabia, and Mexico.

Due to the large scale of distribution and high reliability, the pistols of the Austrian manufacturer Glock are called “Kalashnikov pistols”. The only disadvantage of this small arms is the possibility of cracks on the frame and receiver at the time of use at temperatures below -40 Celsius, since the material from which they are made is polymer. Well, and since even the Russian special forces of the Ministry of Defense, whose representatives about the Glock small arms respond rather flattering, it is extremely rare to act at such low temperatures, it was decided to start purchasing these well-proven pistols.
By and large, here the choice of the Ministry of Defense (well, unlike the French helicopter carriers "Mistral" or Italian Iveco armored vehicles) did not cause any particular complaints from experts. Unless, we are talking about the fact that it would be nice to organize the production of domestic high-quality pistols for the needs of special units. Much more serious in its glow issues caused the publication of orders for these weapons on the web, or rather the issue price.

The customer of the weapon, which was made by Rosoboronpostavka, during the preparation of the auction, determined the contract price in the amount of 66846780 rubles. for 318 pistols Glock-17 and in the amount of 4586400 rubles for 24 pistols Glock-26. The order was placed on October 8. At the end of October, bidding applications must be completed, and 5 November will be held directly auction between those companies whose applications have been reviewed and approved - with the definition of the company, which will supply guns for the Ministry of Defense. The indicated amounts in the order are designated both as initial and as maximum. It turns out that it is for such amounts that the planned small arms are planned to be purchased.

If you make simple mathematical calculations, it turns out that the average price of a Glock-17 pistol according to this “estimate” is 210210 rubles, and a Glock-26 191100 pistol rubles. The average price of such a weapon from the manufacturer itself is no more than 20 thousand rubles, the price in Russia, taking into account the margins of intermediaries, does not exceed 60 thousand rubles. That is, the prices in the order are overestimated, at least 3-4 times. And this suggests that government money for the next batch of purchases may simply be stolen. Or, as they say, money will be spent inefficiently.

It should be borne in mind that Glock pistols are assembled in Russia. Engaged in the assembly of such pistols (most often we are talking about the production of sports modifications) at the facilities of the enterprise ORSIS in Moscow. The implementation of this weapon is the company "Promtechnology", working under a contract with the Austrians.

An interesting fact is that the situation with the price of public procurement acquired the greatest degree of tension after the bloggers paid attention to the amounts. One of them is such a person as a representative of the RosPil movement Andrei (Ipasserby). After its publication, the notorious Alexei Navalny seized upon the information about the “gold” “Glocks”. 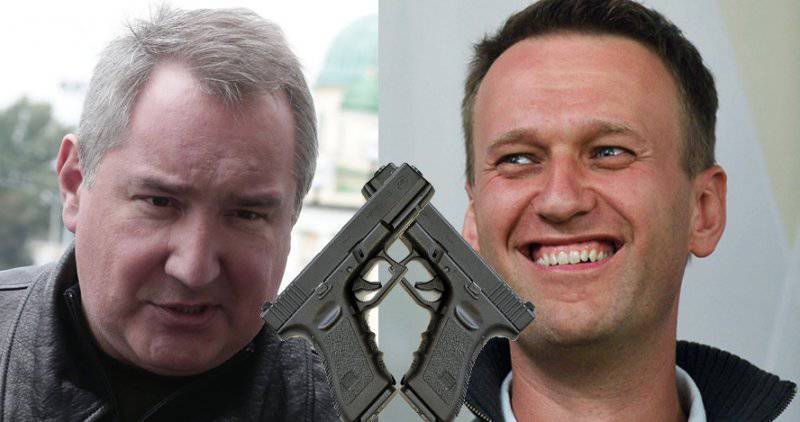 He did not limit himself to disseminating information that someone in the Ministry of Defense (or in another Russian department) is going to make good money on the purchase of small arms for special forces, but put forward a version about who can heat hands on public procurement. According to Navalny, the son of Dmitry Rogozin Alexey can earn. Navalny claims that Alexei Rogozin was for some time the deputy general director of the same company, Protechnology, which concluded a contract for the sale of Glokov, assembled in Russia. The charge is serious, and Rogozin Sr. could not get past him.

The vice-premier decided to respond to Navalny in the same vein in which he actually accused his son of being able to cash in on government procurement for the Ministry of Defense, that is, via the Internet. If Navalny announced a possible conclusion of a contract with Promtechnologies in his LiveJournal, then Rogozin decided to give an answer via Facebook. We present an excerpt from the publication of Dmitry Rogozin - a response to the accusations of Navalny regarding the possible affiliation of the Rogozin family with regard to the purchase of Glock pistols for the main military department (the text is given without adjusting "VO")

Navalny - the leader of the organized crime group KirovLesRospil and the favorite of God's liberal dandelions - finally got to me, got to my family. I decided to water a competitor in advance). Only here I wrote nonsense, hurried. Let us see specifically what we are talking about.
1. The Ministry of Defense subordinate to the agency Rosoboronpostavka declares its readiness to purchase Glock pistols for army special forces. The stated price raises questions from the Military Industrial Commission under the Government of the Russian Federation and its service Rosoboronzakaz. Begins checking the validity of the price. (By the way, starting from 1 in January of 2014, the pricing issues for military products will be regulated by the new law on state order, and the situation should improve radically). In addition, it must be borne in mind that all cases of procurement of foreign weapons and military equipment are considered individually at meetings of the relevant interdepartmental working group headed by my 1 deputy I.N. Kharchenko. I hope everyone knows my attitude to foreign purchases.

2. A week after the start of the check, this Navalny post appears, where it casts a shadow on my reputation. At the same time, he writes about my "employed" son, Alexei, as a little interested in this transaction.

3. I answer: Alexey Rogozin was not "employed" in the company "Promtechnologii", but participated in the 2010-2011. in its creation as deputy director. As a result, private production of high-precision weapons complexes ORSIS appeared in Russia, with these sniper rifles our athletes have won the corresponding world championships for the second year already. At the same time, neither I, who worked at that time in Brussels as Russia's ambassador to NATO, nor my son were shareholders of this company, which is not difficult to verify.

4. After my appointment of 23 December 2011 to the post of Deputy Chairman of the Government of the Russian Federation responsible for the military-industrial complex, my family and I made the difficult decision about the need for him to leave his native enterprise in order not to give any reason to talk about “conflict” interests "(which the cynic of Navalny, by the way, did not stop). Soon, his son and his family left Moscow and went to the Tula region, where he was invited to work at the Alexinsky Chemical Plant as deputy executive director. Combine he got in "wonderful condition" (seen in the photo). The production of powders has long been stopped. Releases paint and something else. All in debt like silks. Former director under investigation.

But it didn’t bother the guy, and every day he works hard to revive this neglected production, which, by the way, has no defense significance, which means that KirovLesRospila, which does not even have the best will, has a relationship with the "defense deputy prime minister." But scoundrels, accustomed to shouting “Hold the thief!”, Again, this does not bother.

There are other points in the answer of Rogozin, but the most important thing is expressed here. At the end of the post, Rogozin writes that he was discouraged from responding to Navalny’s accusations, but he nevertheless decided to answer.

What conclusion can be drawn from the publication of the vice-premier? The conclusion that the price of pistols, which was determined by officials of Rosoboronpostavka, did not initially suit the military-industrial complex under the government of the Russian Federation. That is, Dmitry Rogozin himself did not suit either. That after the adoption of the new law on state defense order pricing will be more transparent. But the thing is that before 1 January 2014, the contract for the same “Glokam” will already be concluded. Information about the order can still be found on the public procurement website in the public domain (and if you can find it, then, therefore, someone is satisfied with such prices for pistols).

So far, no change in pricing policy has occurred. The contact person in both orders is Ekaterina Ezheleva. By the way, this is the same Ekaterina Ezheleva, who in March of this year refused to answer journalists' questions about why the Ministry of Defense needed to purchase Grot-M navigation equipment, which was discontinued three years ago. Why did not she suddenly become - a mystery ...

If the representatives of the Military Industrial Commission under the government of the Russian Federation are not satisfied with the cost of placed orders by Rosoboronpostavka, but the orders are still on the Web, then either the role of the military-industrial complex under the government is dubious, or this is Rosoboronpostavka (Federal agency for the supply of weapons, military, special equipment and materiel) - the organization that is able to determine the price of weapons, based solely on personal evaluations of their employees. And if the assessments are purely “personal”, then already the competent authorities should pay attention to the work of this department, well, if this department is in our hands, it’s possible for someone ...

Ctrl Enter
Noticed a mistake Highlight text and press. Ctrl + Enter
We are
SIPRI published "Top 100" weapon manufacturers in 2013Sberbank translates Russia's defense in foreign offshore?
178 comments
Information
Dear reader, to leave comments on the publication, you must to register.