October 22 2013
36
Everything was mixed up in the Oblonskys' house. Barack Obama, once looking at the Damascus for a red chemical line, which would cause an immediate democratic response, agreed with the peace initiatives of Russia and did not bullet Tomahawks around Syria, although the US military (Chuck Hagel will not lie) and did what they expected order. The terrible tyrant and sarin poisoner of his own people, Assad - and that is how he seemed to the West - suddenly became meek, like a lamb, and refused all his chemical weaponsand even papers corresponding signed. The OPCW, which is now working in Syria, won the Nobel Peace Prize, which looks both politically correct and logical: once they gave Obama, the chemists should be given. And recently it became known that Qatar, who actively sponsored militants in Syria, mainly from the SSA, not only contributed to the release of Lebanese Shiite hostages, but also tries to establish diplomatic relations with official Damascus, broken off in November 2011 on the initiative of Doha. 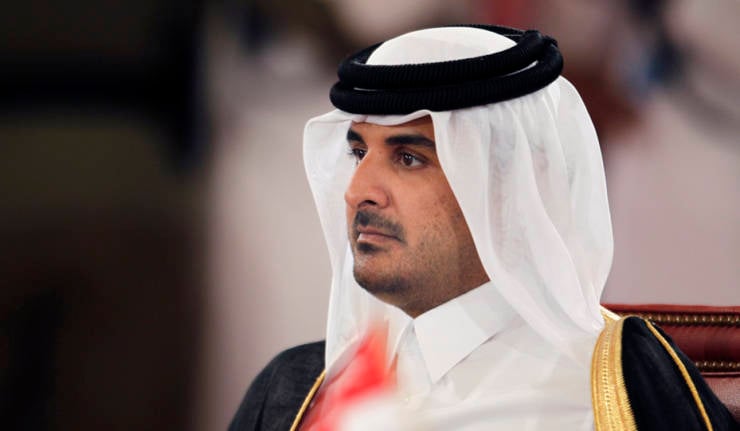 Today, Qatar is sowing the world all around: the idea of ​​ending the feuds of the SSA and some of Al-Qaida’s groups in Syria, also from Qatar. It seems that Sheikh Tamim is trying on Lev Nikolayevich Tolstoy's clothes on himself - or, at least, he is thinking about the Nobel Peace Prize. And at the same time about laying a gas pipeline through the territory of Syria to Turkey: the goal to heat the whole of Europe with gas is also a completely peaceful idea. And not an idea, but a whole dream. And nothing, that for the sake of this goal, Doha for more than two years contains groups of thugs and a whole army - consisting, it is true, of deserters, mercenaries, and every bearded rabble. In the media, by the way, they write that Qatar is financing not only the Syrian Free Army, but also absolutely notorious Islamists (for example, from “Dzhebhat al-Nusra”). And at the same time, on the Al-Jazeera TV channel, the atrocities of Assad are artistically and with decorations.

The representative of the Syrian government replied that Damascus is waiting for Doha to take real steps that would confirm the seriousness of the Qatari authorities' intention to normalize relations. Damascus remembers the role played by Qatar in fueling the Syrian war.

As for the reliability of such information, Evgeniya Novikova ("Independent newspaper") indicates that the Lebanese television channel Al Mayadin reported on Qatar’s offer to make peace with Syria. This is not all: the reliability of the information was confirmed by the “Nezavisimaya Gazeta” source in the Middle East. According to this knowledgeable source, the letter from Doha was transmitted to Damascus via Beirut. Corresponding contacts took place during the Saturday exchange of Lebanese pilgrims for two Turkish pilots. Qatar was also involved in the negotiations on the deal - as a state having influence on the Syrian militants. The Lebanese side received a letter for Damascus along with the pilgrims.

The deal to free hostages from the captivity of the “oppositionists” was the result of difficult negotiations. As the correspondent reports from Beirut "BBC" Jim Muir, who coordinated the exchange, the head of the Lebanese security service, Major General Abbas Ibrahim, called the operation "a very difficult matter."

The pilgrims spent almost a year and a half in captivity of the “rebels” in unbearable conditions. The rebels claimed that the pilgrims were no longer pilgrims, but Hezbollah’s warriors. The Rebels wanted the Syrian authorities to release the 130 women prisoners in exchange.

In August, a “symmetrical” response followed 2013: in the vicinity of Beirut International Airport, unknown persons seized two Turkish pilots. The kidnappers said they would release the pilots in exchange for the release of pilgrims, and demanded assistance from Turkey. Today, the pilots are free: they returned to Istanbul and told reporters that their invaders treated them well.

The agreement to release the hostages, reached with the participation of Qatar, Turkey and the Palestinian Authority, involves the release of the mentioned 130 women prisoners held by the Syrian authorities. This stage of the transaction in the media is not yet covered.

So what does the peacemaker Qatar need?

It is possible that Doha received another portion of disapproval from Washington. Why now? It is easy to explain.

The White House today officially adheres to a diplomatic position on Syria, which has signed the relevant Convention and hastily chemically disarms. Washington has not yet moved away from “turning off” the government, which cost the country 24 billions of dollars, and Congress - the rating (it’s not so low, but even negative), and they don’t even think about any military actions. But the stubborn Qatar continues to arming the militants, feeding them and shoving packs of petrodollars. From the outside it looks very ugly: as if someone does not obey America and pursues not its own goals, but American ones. Moreover, with such sponsorship, it is not the insurgent nature of the struggle against Assad that is exposed, but the selfish character itself. There is no talk of democracy about the Western model. What the hell democracy can be exported from Qatar?

As for the likely American dissatisfaction with Qatari gas (supposedly it will compete with American gas — the very shale gas that the United States is about to fill with the EU’s almost free storage), this competitive question is more likely to suit Washington.

As indicated by Alex Nevelsky (Vedomosti.ru), Royal Dutch Shell is going to sell its stake in the Eagle Ford Shale shale field in southern Texas. According to The Wall Street Journal, Shell stated that the field does not meet the company's objectives in terms of size and profitability. Back in August, the company announced that it had written off the cost of its shale assets in the United States to 2,2 billion dollars. The company's quarterly profit fell by 60% because of this. And Shell said it would consider selling some US assets.

Therefore, we note, Qatari gas to Europe is a good reason to put the gas shale “revolution” on its brakes. Nobody, of course, canceled the plan to knock down Russian Gazprom, but real Qatari gas will lead backstage project authors to a goal much faster than gas propaganda and worthless promises of cheap supplies to Europe for some 2018 or 2020 year, when Obama will be remembered only as the worst president in stories America.

So, the message to Qatar from across the ocean can serve as a version of Doha's steep geopolitical turn. But it is unlikely that only it played a role - if it ever existed.

A week ago, it became known that the Foreign Minister of Qatar, Khalid bin Mohammad al-Attiyah, visited Turkey, where he met with the head of the Free Syrian Army, Salim Idris. Wrote about it IA "REGNUM"referring to "Fars".

The press knows everything, although this trip was classified.

“Al-Attiyah’s visit was part of Qatar’s efforts to coordinate and unite Syrian opposition forces, including armed rebels and terrorist groups,” an unnamed source told Fars. “The Qatari foreign minister is trying to resolve the differences between the Free Syrian Army and the 13 factions in Aleppo, which recently withdrew from the SSA.”

Qatar’s peacemaking activity “on the ground”, we note, does not speak about democracy, but that the Doha mission to overthrow Assad was unsuccessful: Assad is strong, including the unity of the people, and the “opposition” is divided and fighting each other . As a result, Qatar is further away from its gas dreams.

Tamim al-Thani - the new ruler, June 25, who replaced his father on the throne. If he makes a sharp turn, then just at the beginning of the reign. The failures of the rebel militants in Syria can be easily blamed on the father. Tamim, on the other hand, probably wants to be noted for political success. And if it is not possible to achieve something with military objectives, then why not try peace? Opposites are just two sides of the same coin.

(By the way, ideas about the gas pipeline project through Syria and Turkey were heard for the first time in 2009, when the Nabucco project, which was deadly for Russia, was being promoted, and the Qatari pipe would join it in Turkey. It’s time to think about whether it’s solely raw materials the roots of the “Arab Spring.” However, this is a topic for another article.)

As for Qatar, this tiny state is extremely ambitious. A sort of dwarf with the character of a giant. In addition to large reserves of mineral raw materials, it is famous for its large political ambitions and even some kind of influence in the world. The deafening crash in the world media about the liberation of Lebanese pilgrims with the bulging role of Doha in the negotiation process is another proof of this. It’s necessary to understand that Doha agreed because many of the militants are in her pocket ...

And also about ambitions, which the more I want to realize, the more their carrier in the international arena is mocked. Qatar was recently offended by Saudi Arabia. Offended in public. To the whole world. This is also the reason for the geopolitical response.

According to Konstantin Volkov ("News"), two months ago, the Saudi prince Bandar bin Sultan said that “300 people and the TV channel are not yet a state”.

The channel is Al-Jazeera, and 300 man is a wicked irony at the small number of Qatar’s population. Therefore, the young and energetic Emir of Tamim (1980 b.) Decided to take the lead.

Sergey Seregichev, an expert at the Institute of the Middle East, associate professor of the RSUH, told Izvestia:

“Doha intends to seize the initiative. Seeing that the Assad regime turned out to be more stable than expected, she now plans to act as a peacemaker. So the emir can get several advantages at once. He will help reconciliation in Syria, that is, become a peacemaker. He will also establish relations with Damascus, which will make it possible to stretch the gas pipeline to the Mediterranean Sea. And finally, it will show Saudi Arabia that a small country can also play big politics. ”

The pipeline through Syria is what Qatar has stuck in for the Syrian conflict, according to Izvestia.

If the conference "Geneva-2" shows that the peace process in Syria is possible, Qatar will have the opportunity to play along with the American democrats headed by Obama, it is indicated in the material below.

That's right! Qatar in one fell swoop all hares ubivahom. Washington finally turns its back on Riyadh, which, because of the gerontocracy there, may well face its own Arab Spring, while Doha satisfies its political ambitions and lives in harmony with the overseas owner of petrodollars, who also do not really want gas prosperity for Russia.

True, all these hares will be killed only when Doha returns its diplomacy to Damascus. However, Comrade Asad knows what the promises of the owners of Al-Jazeera are worth. Therefore, it is very doubtful that the Syrian President would change the interests of Russia for the interests of Qatar.

On the other hand, Doha has not yet opened all the cards. Something will become clearer at the Geneva-2 conference in November - if it only happens. And it should take place: now Qatar, as a new peacemaker of the 21st century, should also contribute to its implementation. After all, this is a peace conference. In addition, investments in Doha militants have not brought dividends.

And the last. Emir's behavior is pleasant news for those who are unwilling and unwilling to “democratize” Syria. Attempts by Qatar to return diplomacy mean that a final retreat of a divided and hostile "opposition" from the Syrian fronts is not far off.

Ctrl Enter
Noticed oshЫbku Highlight text and press. Ctrl + Enter
We are
Results of the weekChuck Hagel: “There is no glory in war, there is only suffering ...”
36 comments
Information
Dear reader, to leave comments on the publication, you must to register.