US Cocaine Reserve - a weapon of provocation 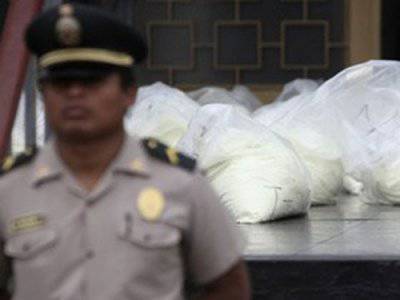 A cargo of cocaine weighing tons in 24 was transferred aboard a US Air Force plane from Costa Rica to Miami on July 27. The loading of cocaine bales was carried out under the supervision of Americans - employees of the DEA and the CIA, operating under the roof of the US embassy. When the work was completed, the Boeing crew without delay rose into the air. The operation was carried out in secret, the Costa Rican airport services did not know anything about it. The country's parliament did not give formal permission for the arrival of the American military aircraft of the Boeing C-17 Globmaster III, although in such cases it is necessary ...


The US secret services failed to keep the operation secret. A day later in the media there were reports that this история Cocaine is very reminiscent of the 1980-x and 1990-ies scandals, when in the United States from Central and South America through the channels of drug cartels, but under the vigilant supervision of special services imported consignments of hallucinogens. On income from their sale was acquired weaponwhich was shipped by the contras. Part of the profits settled in the accounts of drug cartels who received free hand for their business in the United States. The question is: for what purposes do the CIA and the DEA take out drugs from Costa Rica, as well as Panama, Belize, El Salvador, the Dominican Republic and some other states of the Caribbean region?

There is an assumption that drug dealers from Costa Rica and other countries are used for subversive work against “populist” regimes, funding radical opposition groups in Venezuela, Bolivia, Ecuador, Nicaragua. To prevent such assumptions from occurring, Costa Rican officials were quick to state that tons of cocaine were exported to the United States because of the “insufficient capacity of the kilns” used to burn the drug. However, the accumulated reserves of cocaine would not exist if their destruction were carried out regularly. So, in July of this year, in Panama, in public in the presence of the press, tons of drugs, mainly cocaine, were burned in the 12 city dump. Without any furnaces. Using gasoline. And no talk about the threat of ecology. A total of 24 tons of drugs were destroyed in Panama during the year. In Costa Rica, where the US intelligence agencies manage without any restrictions, drugs are clearly saved for other purposes.

There is no reliable information about what fate befell Costa-Rican cocaine in the United States. According to the current situation, the consulate of Costa Rica was to inform the Ministry of Foreign Affairs about the destruction of cocaine by a special telegram. However, he was unable to report, as the Costa Rican consul does not have data on the fate of the cocaine consignment which had been exported from his country on a US Air Force plane. The Americans violated the regulations: not only did they not invite the consul to the procedure of burning, but did not consider it necessary to inform him on this matter. Are these drugs really destroyed? And if so, is it completely? After all, for operational purposes unrecorded reserves are always required. Neither Roy Perrin, chief of the political department of the US Embassy in Costa Rica, nor James Richard Kenney (James Richard Kenney), representative of the DEA, will tell how cocaine will be used. Is there any unforeseen situations on the fronts of the fight against drug trafficking? So, working in Honduras, it was Kenny who ordered fire from a US helicopter to fire on a boat in which there were Miskito Indians. Two pregnant women were killed, two men and another four were injured. No drugs were found in the boat.

The recent history of transporting 1382 kg of cocaine on an AirFrance plane from Venezuela to France also raises many questions. As reported by the media, someone acting under the pseudonym "El Negro", arrived in Venezuela about a year ago and managed to purchase a shipment of drugs from one of the Colombian cartels. Then he resold cocaine to "representatives of the Russian-Italian mafia." Not without his help, the "Mafia" recruited accomplices among the civilian and military personnel of the International Airport. Simon Bolivar, as well as among AirFrance staff in Venezuela and in France. Suitcases with cocaine in the names of fictitious passengers without any obstacles were delivered directly to the cargo ramp of the aircraft and loaded on board. Drugs safely crossed the Atlantic and were at the Paris airport. For ten days they were in stock and only then were “accidentally” discovered by the security service. So far, no Russian names have been heard in the investigation process. Apparently, the noise in the media should have just served as a signal of the penetration of the “Russian mafiosi” into Venezuela.

President Maduro called the case of drugs in AirFrance a “strange story”, not excluding that “unfriendly forces of Venezuela” had a hand in it. For the president, this “case is very similar to the operation for the controlled transfer of drugs”, conducted by DEA. According to Maduro, where this organization is present, “drug traffic is always gaining momentum.” The President urged the military to pay special attention to those Venezuelans who had previously collaborated with the DEA, and are now admitted to the states of transnational companies.

During a meeting with the command of the Venezuelan army in early October of this year Maduro announced that the provision on the Law on the Control of Integrated Defense of the country's airspace had entered into force. Aircraft that violate the rules for the use of airspace, including those involved in drug trafficking, will be intercepted and neutralized. The President emphasized that there are now opportunities for this, since the radars acquired in China make it possible to track the situation in the sky over the entire territory of the country. “Any aircraft,” said Maduro, “which [illegally] invades Venezuela, will be forced to land or, if it does not comply, will be shot down by our Sukhoi, F16 or any other aircraft of our military aviation". Confirmation that the president’s words did not diverge from the deed was the report of two planes shot down in October, illegally crossing the border of Venezuela.

President Maduro paid special attention to the specifics of the DEA: “Drug trafficking has great power, and in many cases this structure (DEA) uses it to fabricate cases against our country as a political weapon to declare that Venezuela is a narco-state.” Maduro recalled that Venezuela has achieved great success in arresting drug traffickers and seizing drugs. And all this after the break-up of relations with the DEA - “transnational drug trafficking organization”. We quote Maduro: “Where do millions and millions of dollars go from the sale of intercepted drugs, to which bank? In US banks to support the economy of this country. It is said that 500 is billions of dollars a year. And this United States agency is going to blame a country like Venezuela, which protects all its borders, destroys drug crops and does not produce drugs, that we are a narcotic state. ”

Maduro's indignation is understandable. In recent years, the DEA and the CIA have repeatedly found themselves at the center of scandals, when employees who participated in drug-compromising operations of hostile countries and politicians were spotted. The scope of these operations is enormous: DEA uses the dirtiest methods to recruit agents, blackmails, throws drugs, threatens reprisals against the relatives of the “candidate”, falsifies evidence, physically cracks down on those who intend to break with DEA ​​and expose it. In many Latin American countries, the DEA dictates its own rules of the game to national units fighting drug trafficking, engaging them in conspiracies against "populist regimes." For this reason, the activities of the representative offices of DEA in some countries of Latin America have been discontinued, while in others they are under the secret supervision of the authorities.

In essence, DEA is a criminal organization that imitates the fight against drug trafficking and creates the necessary conditions for US domination in the global drug business. Legalization of marijuana in some US states is only the first step towards total “drug-liberalization”. The press has already begun to write about the alleged harmlessness of cocaine, oppose it to heroin and other drugs. Next in line are “breakthrough initiatives” in the cocaine business. Now, according to Latin American experts, it is more than 60% controlled by DEA. Latin American governments understand that this “partner” can always stab in the back.

Ctrl Enter
Noticed oshЫbku Highlight text and press. Ctrl + Enter
We are
The drug war of the United States against VenezuelaWhat we lost
30 comments
Information
Dear reader, to leave comments on the publication, you must to register.