Why are the US and Iran in a hurry to agree? 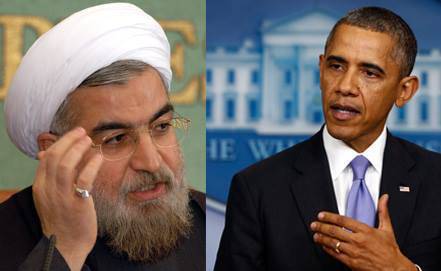 The meeting of the “six” of intermediaries and Iran on the problem of the nuclear program of this country, which took place in Geneva, has passed and ended almost as expected, more than successfully.
The meeting was preceded by numerous advances and assurances from all sides of the process, after which there was simply no point in pulling further. Iran put forward "completely new initiatives", the United States received them with enthusiasm, the rest of the negotiators supported the Americans' optimism.

What were these "new initiatives"? At first glance, the position of Iran has remained almost the same. However, there were significant nuances. Iranian Foreign Minister Zarif proposed a phased settlement plan consisting of three interrelated steps.
At the first stage, Iran is recognized its unconditional right to develop a peaceful energy nuclear program.
The second stage is the guarantees of the Iranian side, which remove any issues in the military focus of this program.
The third stage is the lifting of unilateral and international sanctions.

The main question is guarantees. It is here that Iran is really ready to make serious concessions.

Firstly, they concern the consent of the IAEA to conduct any suspicious objects for surprise inspections by the IAEA. Earlier, the Iranians categorically objected to inspectors and experts of the IAEA visiting some of them, in particular, the laboratory near Parchin. The IAEA and the USA have suspected this laboratory of working on neutron initiating devices, which are a critical node in the production of nuclear weapons. Iran rejected any suspicions, but did not allow the object, citing its refusal by saying that it is military and completely secret, but it does not have anything to do with the nuclear program. There were other bans on the activities of the IAEA inspectors. Now it seems that Iran is ready to make concessions in this matter.

Israel and the United States called this level dangerous in terms of the ability to use this fuel for the production of nuclear weapons. This is not entirely true, but if the kilogram of uranium enriched in 372% uranium existing in 20 of Iran is enriched, then theoretically this fear has a right to exist. Highly enriched uranium in itself is not a nuclear charge, this requires a rather long way to go, but Iran decided to remove the problem, ensuring that in the future it is ready to enrich nuclear fuel to lower levels.

This will require the Iranians to revise the technological parameters of their reactors, will force them to work on the transfer of existing and future power units to less enriched fuel, but in general the problem is solved.

At one time, the Tehran research reactor TVR has undergone such an upgrade. Specialists from Argentina reconfigured it from work with 93 percent uranium to 20 percent.

However, Iran will not give up its accumulated reserves - this is its categorical demand. Apparently, the fuel already available to him will first be used for its intended purpose, and then it will be possible to carry out modernization of the reactors. In a sense, Iran guarantees its normal uninterrupted work if it is not possible to come to an agreement. On the other hand, he does have a supply of fuel, which allows him to work for several years, so the Iranians can afford to calmly prepare for modernization without disrupting existing programs.
Judging by the optimistic reaction of all the participants in the meeting in Geneva, Iran’s initiatives have been met more than favorably. Both the European Union, the United States and Russia expressed very positively about the outcome of the meeting, Iran also expressed its satisfaction. The main thing was to make and sign a short communiqué on the summit, which was not there before.
Now there is a work of experts who will reduce the principal agreements to concrete steps and deadlines. The work has to be urgent - in a few weeks a new meeting will take place. It seems that both Iran and the “six” intend to complete the multi-year negotiations as soon as possible and reach concrete decisions. If so, by the spring of the year 2014, sanctions can be lifted from Iran. This raises the legitimate question: why such a rush? What happened that the United States and Iran suddenly sharply discard differences and go in an expedited manner towards each other?

Why are the US and Iran in a hurry to agree?

Iran’s interest is understandable - the sanctions have caused very serious damage to its economy. He learned to work in these conditions, but problems are growing. Problems that can undermine the internal stability of the country, he does not need. The economy adds quite significant social difficulties, there is a very difficult problem of reconfiguring the political system and carefully rethinking the interests and demands of the younger generations of Iranians who are not satisfied with the rigid fundamentalism of the existing system.

We are not talking about restructuring a la Gorbachev, but continue to pretend that everything is fine, the Iranian establishment can no longer. Therefore, the lifting of sanctions gives Iran resources that it lacks to carry out a broad modernization of the country, both political and economic.

The tasks of the United States are also clear. Obama, putting on the "Muslim Brotherhood" at the beginning of the Arab Spring, as agents of his policies in the region, suffered a crushing defeat. The “brothers” turned out to be political impotent men, dreamers and disgusting managers. In all countries where they took power or got access to it, they failed completely. The answer was the return of the former elite and the strengthening of the positions of Obama’s political opponents in the region.

Iran in this case becomes the answer of Obama to his political rivals. The answer is serious and quite effective. The threat was taken with all seriousness - in order to thwart the emerging agreements between the United States and Iran, Saudi Arabia and Israel almost put the region on the brink of full-scale conflict after the provocation in Eastern Gute. Actually, even now this danger has not been eliminated, and this may explain the US rush to end the process of the Six’s negotiations with Iran.

The second problem that forces Obama to make urgent agreements with the Iranian leadership is Afghanistan. The withdrawal of NATO troops next year will inevitably result in the coming to power of the Taliban. All attempts to reach an agreement with them did not work, the Taliban perfectly understand that literally in a year most of Afghanistan will come under control, and therefore he has nothing to negotiate with the Americans.

Russia and its Central Asian allies are extremely concerned about the evolving situation. Independently neither Kyrgyzstan, nor Uzbekistan, nor Tajikistan will cope with it. The CSTO in this case becomes the only instrument for deterring the expansion of the Taliban to the north. Connecting Iran to deterrence seems more than reasonable.

Obama's plan is simple and clear - the United States, leaving Afghanistan, releases its forces and at the same time binds Iran and Russia on the Afghan track with the need to confront the Taliban. Therefore, Obama needs a strong Iran capable of simultaneously confronting his opponents in the Central Asian region and in the east in Central Asia.

The interests of the parties coincided - and now there is no point in pulling the settlement process further. Apparently, no later than the spring of next year, the differences between the “six” and Iran will be finally eliminated.

Naturally, neither Israel nor Saudi Arabia will be satisfied with the current situation, but this is also part of Obama’s intentions. He will link his opponents with confrontation with Iran and free up resources to solve problems in other areas.

Ctrl Enter
Noticed oshЫbku Highlight text and press. Ctrl + Enter
We are
Iranian Foreign Minister Mohammad Javad Zarif gave an exclusive interview to RTIllusion of victory
38 comments
Information
Dear reader, to leave comments on the publication, you must to register.