Our tank went through the Andes 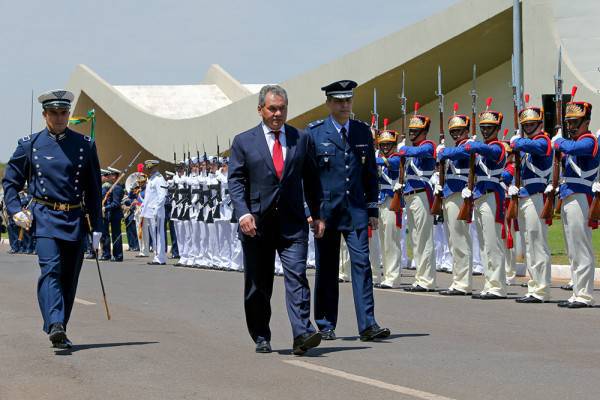 Last week, a representative Russian delegation led by Defense Minister Sergei Shoigu traveled to Peru and Brazil. Although during these visits no agreements were signed and no deals were concluded, many experts are sure: Shoigu and his team managed the main thing - they convinced the partners that our country is ready for the role of "big player" in the arms and technology market of Latin America.


The competition there is quite tough. Take a leading position, guided solely by commercial interests, will not work. And, to have contracts with a prospect, you need to build a truly partnership with the customer. That is what we had with Venezuela, the same is now being established with Peru and Brazil.

Why did Shoigu choose these countries for his first Latin American voyage? Peru and Brazil are currently upgrading their national armies. And in the choice of weapon-technical priorities, the leaders of the countries occupy a position that is rather independent of the United States and NATO. Namely, we recall, they are Russia's main competitors on the world market. weapons. In general, according to Shoigu, in this matter Moscow should not take the position of an outside observer.

- Our defense industry is developing quite energetically. If earlier we said that we use the groundwork of the past, including the Soviet years, then today there are modern developments. In particular, the fifth generation fighter. This is a serious car, no one can say that it is worse than what was offered before us, the defense minister told reporters after returning from South America.

We must not forget that in the battle fleet of the Peruvians and Brazilians there are many Soviet and Russian equipment, including Tanks, aircraft, anti-aircraft missile systems. Some of this arsenal must be replaced with modern models. Another technique needs to be modernized. Lima and Brazil are well aware that no one will do this better than the Russian defense industry. The quality of our weapons in Latin America has always been highly appreciated, moreover, it is cheaper than its Western counterparts.

Take, for example, Mi-8 helicopters. Sergei Shoigu recalled that fifteen years ago at a meeting with the then President of Peru, he heard from him very favorable reviews about this car. The helicopter theme for Lima is still extremely relevant. And for Brazil too. The Brazilians, by the way, signed a contract with Russia for the supply of twelve Mi-2008М as early as 35. Execution of the transaction is close to completion. And at the current talks, the talk was about the purchase of Mi-171Sh helicopters, which are necessary for customers from Latin America to fight terrorists and drug barons, including in the mountains. Our machine is able to fly at an altitude of five thousand meters, and therefore from its side one can, for example, look for coca plantations in the Andes.

- Now there is a trend when they want to buy not only goods, but also everything that is necessary for the further maintenance of this product. In this case - weapons, - shared his observations Shoigu.

RG has already written that Peru could become another state whose relations in the military-technical sphere are not limited by the principle "We produce weapons, but you buy them." There is no talk of joint development of combat systems and complexes yet. But to organize repair in Peru, and in the future, possibly, the licensed production of our export aviation technology is quite real. This task could be taken over by a service center. Moreover, it will be really used not only for servicing Peruvian helicopters, but also for rotorcraft in other states of South America. Almost all of them have our "Mi", and therefore probably want to become customers of the new enterprise.

As Shoigu put it, Russia is quite close - almost at arm's length - standing from serious and important military-technical cooperation projects. This, in particular, concerns the supply of T-90C tanks to Peru. Now they are passing the stage of the so-called Smotrin. Peruvians had already tested one car at their Cruz del Huesco military range. And the final part of the checks, according to Shoigu, should be held in Russia. “I think in the coming month we will be ready to receive the Peruvian delegation,” the minister said. Then, you see, it comes to the conclusion of the contract.

If you go back to the fifth-generation fighter, then the talk that Brazilian experts could join the work on the aircraft turned out to be quite reliable. Shoigu confirmed that two interaction options are being considered. The first is the creation of a joint machine, the second is the involvement of Brazilian designers and engineers, who have "quite a lot of experience in this area." Their experience is actually used in another project that was discussed at the talks in Brazil - the joint production of combat-training aircraft. Russia suggested that the Yak-130 flying party be considered as the base machine.

Even before the departure of the Russian delegation overseas, our press wrote about the possible supply of anti-aircraft missile-cannon systems "Pantsir-C 1" to Brazil. They are excellent for short-range cover of civilian and military sites from all modern and promising means of air attack. The newest air defense system is designed in such a way that the multichannel system for capturing and tracking targets is combined with gun and artillery weapons. This ensures the simultaneous destruction of up to four air objects flying at a height from 5 to 15 thousands of meters and being at a distance from 200 meters to 20 kilometers from the complex.

Some authors have suggested that such a weapon is necessary for a country preparing to take the World Cup and the Olympics. The correspondent of "RG" asked Shoigu, is it possible to conclude such a contract? The minister replied that negotiations were indeed under way with the Brazilians on the Pantyr. And he added: "We are entering an agreement." Shoigu had no other comments. However, on the sidelines of the talks, the author of these lines made it clear that there is still no need to directly link the possible supply of an anti-aircraft complex to ensuring security at international sports games. Firstly, the preparation and conclusion of a contract for the Panther, not to mention its deliveries to Brazil, is not a quick deal. To the championship-2014 and Games-2016 can not make it. Secondly, the interest of the hosts of the world football championship and the future Olympics to our air defense complex is clearly beyond the scope of important sporting events. At the same time, experts say that in terms of combat effectiveness, the Pantsir is one hundred points ahead of any other means of covering objects (say, the same Olympic village or football stadium) from an air strike.

But if the Brazilians are interested in Russian man-portable Igla anti-aircraft missile systems, then there certainly won't be any problems with their delivery "for the game".

Another important area for the interaction of Russia and Brazil is space. According to Shoigu, today it is becoming more and more important, both for security and for the economy of each country.

- We are talking about joint projects - the creation of satellites and a separate program for the Brazilian space program. We agreed to form an expert working group, which will start preparing proposals in this area of ​​cooperation in the very near future, ”Shoigu said.

The soldier will not go hungry

Sergei Shoigu commented on the publication in the Independent Military Review, which came out last Friday with the catchy headline “The Army will be fed until August, and dressed as necessary.” It was about the draft military budget items for the next three years.

The Minister of Defense believes that one such statement "immediately causes a corresponding reaction of tens, even hundreds of thousands of mothers - how can it be, our children will be fed only until August! Everyone understands these things literally."

“But in a sense, I am still grateful to those who are closely watching the military budget and are probably trying to help us,” Shoigu told Russia in an interview. - Now on the subject matter. I must say that the draft budget for 2014 - 2016 has been worked out in detail by us. For us, it is a continuation of the development, modernization, equipment of the Armed Forces. Not reducing, but having carried out a complete synchronization with the supply of weapons and military equipment, we redistributed part of the funds, and sent some of this to additional training of specialists. This was necessary because by the year 2016 a serious shortage of pilots is expected.

If we talk about food, then this year we are fully completing the equipment of all canteens. There will be food, as in the civilized world - with a buffet and an increase in the range of about two, and about three times. We see a qualitative, serious improvement after the replacement of equipment in our canteens and due to the appearance of new assortments of individual diets. This is what used to be called dry rations.

This year we started, next year we will continue the serial supply of modern types of military uniforms to the Armed Forces. Moreover, the work on the combat equipment “Warrior” has been actually completed, starting next year we will start purchasing it for the army.

Fuel is also enough. This year, the crews ’raid and the length of time spent in the sailings of sailors increased significantly. Next year, this trend will continue.

Of course, there were long conversations, disputes, and various consultations on the draft defense budget items. It ended with the Supreme Commander. The president has dotted the "i".

Ctrl Enter
Noticed oshЫbku Highlight text and press. Ctrl + Enter
We are
Modernization of BMD
24 comments
Information
Dear reader, to leave comments on the publication, you must to register.