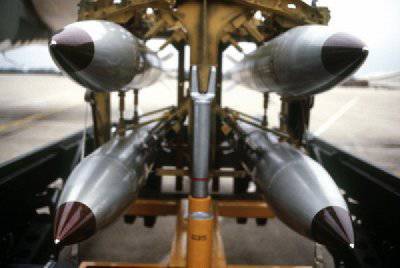 The National Nuclear Security Administration (NNSA) under the Department of Energy of the United States intends to replace seven existing nuclear weapons with five new ones during 25 – 30 years. This is stated in the report, which promulgated on Thursday one of the most authoritative American public organizations - the Union of Concerned Scientists (SOU).


In the 92-page study "Making smart security decisions - the future of the US nuclear weapons complex," the authors urge the United States government to abandon plans to create new types of nuclear weapons. The concern of scientists, in particular, was caused by the intention of NNSA to build several new facilities of the nuclear military complex, as well as to increase the amount of tritium content in nuclear warheads in order to increase their combat and technical reliability. In the opinion of the JMA, the NNSA "should strongly prefer to upgrade or re-fabricate existing types of nuclear weapons" rather than construct new ones. “Creating new types of weapons, even if we are talking about using components of existing devices, will be considered by many as a violation of the Obama administration’s promise not to develop or deploy new nuclear warheads,” said Union experts, according to ITAR-TASS. In addition, the report's authors noted that such actions by the US authorities are capable of “generating concern about the reliability of weapons.”

Specialists from the JMA also suggested that the US government abandoned plans to build a new plutonium core production facility at the Los Alamos National Laboratory (New Mexico) and postponed plans to create a uranium processing plant in Oak Ridge (Tennessee). The estimated cost of the first project is 6 billion dollars, the second - about 7 billion.

The new strategy for the use of nuclear weapons by the United States, which entered into force in August 2013, also refers to other plans. According to her, in the light of financial uncertainty, the United States set the main goal of "maintaining a safe, secure and effective nuclear arsenal." In this regard, the modernization of the strategic nuclear triad, according to US Assistant Secretary of Defense for Global Security Affairs, Madeline Cridon, gives 12 billion dollars, which is less than 0,3 percent of the country's federal budget, less than 3 percent of the Pentagon’s 526 billion.

In particular, we are talking about upgrading intercontinental ballistic missiles Minuteman III, as well as Trident II D5 missiles, which are equipped with strategic Ohio-class submarines (they will be replaced by 12 prospective SSBNs, which are currently being developed). Also carried out the upgrade of strategic bombers direct B-2 and B-52H. A new bomber is being developed for an air defense breakthrough, new air-launched cruise missiles.

The document clearly states that the Pentagon will retain forward-based nuclear weapons, which in the US military include tactical nuclear weapons (TNWs) deployed in Europe and the Asia-Pacific Region as the basis of advanced nuclear deterrence. For example, US TNWs will remain on the European continent until NATO “determines the conditions” that will become the basis for changing the alliance’s nuclear policy.

Meanwhile, Pentagon chief Chuck Hagel, speaking at a press conference on the resumption of the federal government, said Thursday that the US Department of Defense still has limited opportunities to launch new weapons programs because it is funded on a temporary basis. According to the minister, the forced reduction of military spending inevitably affects the combat readiness of the American troops and may ultimately weaken the country's defense capability. “Continuing budget uncertainty will have a negative impact on our economy, our national security and America’s position in the world,” Hagel warned.

Ctrl Enter
Noticed oshЫbku Highlight text and press. Ctrl + Enter
We are
ARMY-2016. Miracle of Russian energyThe Dangerous Future of US Strategic Forces (PetroleumWorld, Venezuela)
4 comments
Information
Dear reader, to leave comments on the publication, you must to register.