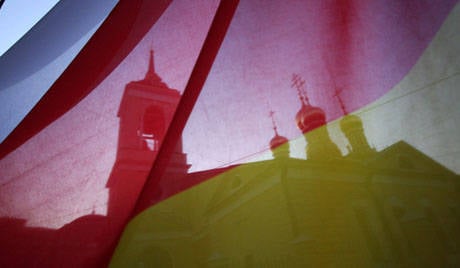 The entry of South Ossetia into the Customs Union is hampered by a number of factors. The key ones are the special status of the republic in the international arena and the position of Belarus and Kazakhstan. However, Tskhinval can cooperate with the CU countries in some economic projects and without fully joining the entire package of documents of the association, said Alexander Karavayev, a researcher at the Institute of Economics of the Russian Academy of Sciences.


Entry into the Customs Union is a priority for South Ossetia. This was stated by the head of the republic Leonid Tibilov at an extended meeting with the presidential aide Vladislav Surkov. She became the second in a row. Prior to this, politicians met in a narrow composition.

The theme of the accession of South Ossetia to the Customs Union has been discussed for more than a year. Earlier, at a meeting of the Inter-Parliamentary Assembly of South Ossetia, Abkhazia and Transnistria, a corresponding appeal was made to the Russian president. While this issue is at the stage of study.

- Of course, there will be difficulties, moreover from Kazakhstan even more than from Belarus. For Minsk, relations with Tbilisi are not as significant as for Astana, which has quite diverse and diverse economic ties and projects, and is interested in a number of transport projects in Georgia.

Naturally, Tbilisi will try to lobby for the braking of this possible decision on the accession of South Ossetia to the Customs Union. Actually, this will be a great diplomatic difficulty.

- And can, in principle, Kazakhstan and Belarus make concessions? Is recognition of the republic from their side possible?

- Understand what it is. If Astana and Minsk become aggravated with Tbilisi and these aggravations will be very significant, then I think they will postpone it indefinitely, as it was in September 2008, when they were asked to implement the international act of recognition after Moscow.

But, if we succeed in some kind of informal diplomatic consultations, maybe trilateral between representatives of Russia, Kazakhstan and Georgia, it is impossible to get around this issue, because it is obvious that it is impossible to remove it, because so far Georgia’s strategy is the reintegration of these territories, but somehow remove the sharp corners - then, in principle, nothing is impossible.

But I would note here that it is possible to implement a number of economic projects of the Customs Union on the territory of South Ossetia without full adherence of the republic to the entire package of documents of the CU.

- If we imagine that South Ossetia still gained membership in the Customs Union, what will it give to the republic?

- First, it will give impetus to local producers to enter more distant regional markets. The problem of South Ossetia is that it is in rudimentary macroeconomic development. There are many problems with transport infrastructure, almost a low level of industrial development.

If you can show opportunities for local regional business to sell products not only in the Caucasus and in Russia, but also in those countries that are members of the Customs Union, this will give an additional impetus.

And if they find partners in Belarus and Kazakhstan, then an increase in the direct investment of these countries into the territory of South Ossetia is possible. This is very important, because the republic still lives on 90 percent at the expense of Russia.

- And what can South Ossetia offer the countries of the Customs Union?

- In addition to their products almost nothing. It is necessary to be realistic, South Ossetia differs not only in status, but also in its scale and weight. This is not a typical public education. This is a microregion, which is not an important element for such large economies as Kazakhstan, Russian, Belarusian. Therefore, the question can not be put.

Here, rather, we need to think about how we can help South Ossetia. I have already said how we can help her. First, it is an investment. Secondly, it is the possibility of output of products manufactured in South Ossetia to the markets of the countries of the Customs Union. This will be a very significant contribution to the development of South Ossetia.

Ctrl Enter
Noticed a mistake Highlight text and press. Ctrl + Enter
We are
Nikolay Silaev, Andrei Sushentsov: Georgia after the elections and prospects for Russian-Georgian relationsReligious conflict in Abkhazia? It is possible
35 comments
Information
Dear reader, to leave comments on the publication, you must to register.