October 21 2013
188
The kit of the Russian perspective combat equipment of the “soldier of the future” “Warrior” is already fully ready for state tests. It is planned that the kit should be adopted next year. About this journalists on Thursday, October 17, said the general director of the Central Research Institute "Tochmash" Dmitry Semizorov. The preliminary tests of the kit ended in September. To begin a series of state tests, a directive from the Russian Ministry of Defense is needed. At the same time, according to Semizorov, the tests will be carried out element by element. In total, the "Warrior" includes 50 of various elements.


Testing such a number of elements can take from 2's weeks to 2-3 months, said Dmitry Semizorov. It is reported that the tests of the "Warrior" will be held at various Russian test sites. After that, the elements of equipment "soldier of the future" will be sent to the mass production. According to Semizorov, the “Warrior” will begin to enter the troops already in 2014, the first to receive these kits will be new ground brigades. Next year, it is planned that 5-7 connections will be equipped with this equipment, and all other parts will receive it during the next years 5.

At the same time, the military have already thought about the modernization of a promising set of combat equipment. The modernization process, according to the general director of the FSUE Central Research Institute "Tochmash", will begin next year. Starting from 2014, a large exploratory work will be opened, in particular, to work out and identify new ballistic solutions in the defeat system. The Central Research Institute "Tochmash" hopes that the Ministry of Defense will decide on a significant modernization of the existing set of combat equipment. According to Semizorov, the military is currently at the decision-making stage on the various proposed modernization options. 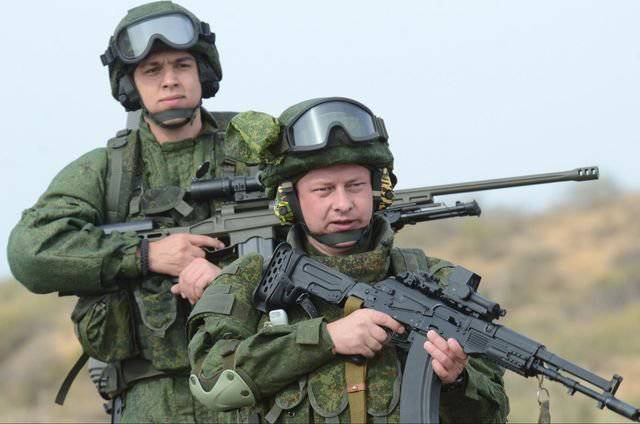 The average warranty period for using the “Warrior” kit will be 5 years. This set of equipment will be transferred from one soldier to another until it falls under the write-off. For example, if only one soldier will wear a T-shirt, the summer uniform will be designed for two. Winter owners will also have more owners; the rifle will last longer weapon, knives, body armor, helmets. A total of about 50 of various elements will be included in the kit: newly created or modernized items of clothing and equipment, weapons, personal protective equipment, means of protection against damaging factors of weapons of mass destruction, as well as non-lethal weapons.

The basis of equipment "Warrior" is a modern aramid jumpsuit, which is made of fiber "Alutex", manufactured by Kamenskvolokno. This jumpsuit is able to withstand a direct hit by fragments of mines, grenades or shells, and can withstand exposure to open flame for some time.

In addition, the set includes a body armor with ceramic armor plates capable of withstanding the bullets of a SVD or AK-74 rifle, as well as a special multi-layered helmet. 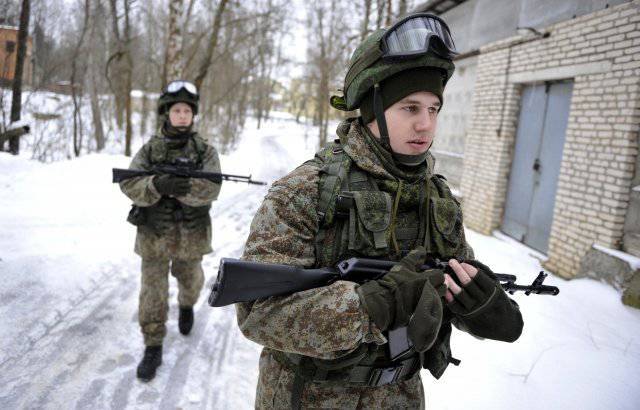 All elements of the “Warrior” kit can be freely combined with each other, interchanged. The total weight of a standard set of body armor 5-th class of protection and overalls is about 10 kg, maximum - with an assault body armor 6-th class of protection, helmet, arm-armor to protect the hips and shoulders - about 20 kg. In general, the “Warrior” kit will be able to cover about 90% of the body surface of a serviceman. Its "breathing" structure provides for the possibility of continuous wear of equipment for at least 48 hours. Suit fabric is impregnated with a special compound that passes air well, while retaining moisture. It is noteworthy that the soldier’s armored suit blocks the radiation in the infrared and ultraviolet spectrum, which makes it invisible in a thermal sight. And in the case of such a need, the entire set of equipment can be easily thrown off in a few seconds, almost in one motion.

The control system of the “Warrior” equipment kit is represented by means of identification, communication, display and processing of information, navigation, and orientation. A soldier’s ammunition will house a communicator, which will make it possible to determine its coordinates using satellite navigation systems GLONASS and GPS, which will make it easy to solve various tasks of orientation to the terrain and target designation. At the same time, information on the location of the fighter on the battlefield will be automatically entered into the control.

The life support system of the equipment was supplemented with protective glasses, as well as a set of protection for the elbow and knee joints, a headset for hearing protection, a set of autonomous heat sources, an individual filter for water treatment and a number of other components. In addition, the kit includes a set of means of energy supply and destruction. 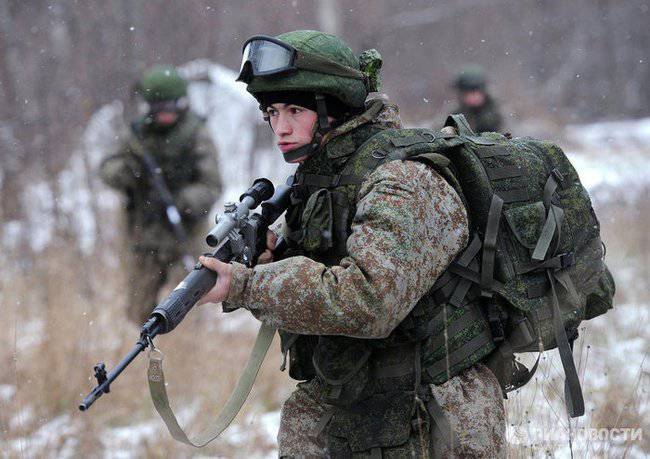 At the current stage, the “Warrior” weapons system includes the latest version of the AK, equipped with a night-sight sight, a grenade launcher and a thermal aiming system. According to the designers, there are no analogues of this system in the world. Also, the fighter will have at his disposal a special video module that will allow him to fire from behind the shelter or the corner, without protruding and not putting up bullets.

The Russian 1PM-139 thermal imaging sight will allow soldiers to fight in fog, darkness, as well as see the enemy in the smoke. New items are going to be used in the “Warrior” kit. The electronics of the device allows you to detect the enemy at a distance of 1200 meters. The heat that radiates from any body will be focused with a special lens on the matrix, which perceives it and converts the incoming signal into a picture. According to representatives of the development company “TsNII Tsiklon,” this sight is able to “see” the temperature difference even in 0,1 degrees. The sight will work synchronously with a special eye flap, which is mounted on a soldier’s helmet and on which the picture from the sight is broadcast.

It is reported that each sight, created by the "CYCLONE", passes a series of tests - in special boxes at temperatures from -50 to + 70 degrees, as well as drop and vibration tests, it is able to withstand overloads up to 350g. Currently, the device has already completed a factory test cycle. State tests of a thermal imaging sight are scheduled for November 2013, after they end, it will be decided to launch this device into production and supply sight to the troops. 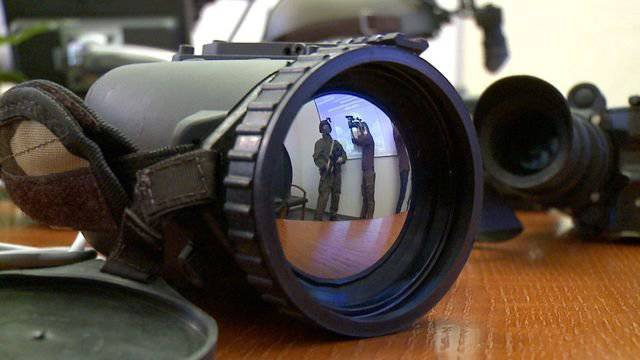 It is worth noting that this device is not cheap. The cost of one thermal sight is 900 thousand rubles. Oleg Yakovlev, adviser to the general director of the Central Research Institute "Cyclone", told reporters about this. According to the expert, such a high cost of the system is currently due to the small volume of orders from the Russian Defense Ministry, as well as the use of expensive French-made thermal imaging arrays (Ulisse). In particular, after the customs clearance procedure, the price of one matrix is ​​about 8 thousand dollars. At the same time, the cost of a set of a thermal imaging system in the French outfit of a soldier of the future FELIN is about 50 thousand euros (about 2,2 million rubles).

It is assumed that its own Russian-made thermal imaging matrix for the “Warrior” kit will be ready in 2015 year. According to Oleg Yakovlev, its price will be about 100 thousand rubles. The composition of the thermal system of the “Warrior” kit, in addition to the sight itself, also includes a helmet-mounted display. The sight can be installed on any small arms, including machine guns, machine guns and sniper rifles. In addition, the composition of the thermal imaging system also includes special binoculars targeting and reconnaissance.

A new set of military equipment "Warrior" should be put into service in the 2014 year after the completion of state tests, it was previously planned to adopt a set of weapons before the end of 2013 year. However, according to Deputy Prime Minister Dmitry Rogozin, there was a delay in adoption, which is associated with the need to "refine" the small arms that make up the kit. The Russian defense order for the next year has already provided for the purchase of several tens of thousands of sets of equipment "Warrior". The kits will have to go into service with the Airborne Forces, the naval infantry, and the units of the Ground Forces. The first to equip the "soldier of the future" will receive some parts of the Western Military District. Fully transition to new equipment will be implemented in 5 years.

Ctrl Enter
Noticed oshЫbku Highlight text and press. Ctrl + Enter
We are
Combat gear "Warrior" on the wayDefense Ministry began to test promising elements of combat equipment "Warrior"
188 comments
Information
Dear reader, to leave comments on the publication, you must to register.