October 21 2013
11
In the Soviet Union, the threat of a nuclear breakout weapons one of the main reasons for the rapid development of air-to-air guided missiles to the most important objects in the country at the end of 1940-x and the beginning of 1950-s. Using only one atomic bomb, the enemy could destroy almost any target. In this case, the bomber could act alone. This corresponded better to the use of air-to-air guided weapons for the destruction of nuclear weapons carriers prior to their use of their weapons.

In 1951, Kuksenko, P.N. and Beria S.L., reported to I.V. about the possibility of developing a radar patrol aircraft, after which it was developed under the designation D-500. The aircraft of the radar patrol could increase the detection range of the enemy’s air attack means by several times. By the beginning of 1951 of the year, KB-1 issued a tactical and technical requirements for the creation of a rocket, and OKB-301 began to design it.

One of the leaders of the design offices was S. Beria, the son of Lavrenia Pavlovich. This circumstance had a huge impact on the progress of the work: at the initial stage, enormous capacities were dragged to the project, but after the arrest of Lavrenti Beria, the project was curtailed. According to the technical project, the weight of the missile of the Berkut complex should not exceed one ton, however, in the course of work, it became clear that it would not be technologically possible to reduce the mass of the missile to less than 3 tons. All early ground missile developments were used for a light air-to-air anti-aircraft missile for the aircraft complex being developed.

During the development of the G-300 aviation guided armament, the main requirement was the long-lasting locking of the complex and the maximum independence of the aircraft carrier from ground-based radar equipment. These conditions became decisive in choosing as the basis for the future "fighter" of the heaviest domestic serial military aircraft of the time - the Tu-4 heavy bomber. The carrier assigned the index G-310.

The G-300 system in the new aircraft combined the functions of the long-range radar patrol aircraft and the fighter-interceptor. The aircraft was equipped with four radar stations of the Typhoon D-500 system. The detection range of the stations was 80-100 km. The review was provided in the rear, front, lower and upper hemispheres. VV Tikhomirov, who headed the Scientific Research Institute-17, became the chief designer of the radar station.

In addition to radar tools, the Tu-4 was supposed to carry four missiles with a range of 40 ... 50 km. Beam holders with parallelogram mechanisms were manufactured for new rockets. Since the lead developer G-300 became electronic engineers KB-1, and not aircraft, they are well aware of what can happen when using a semi-active radar homing, because such a device was installed on their first child - "Comet". In this regard, the designers chose a simpler way: they used a beam guidance system.

The use of the mighty Tu-4 as a carrier made it possible to simplify the design task of creating air-to-air missiles. To the new missiles there were no hard mass-dimensional restrictions applied to the armament of fighters. The renowned creator of wartime aircraft, who at the beginning of 1950-s became the chief designer of the B-300 SAM (“205 product”) for the Berkut system, S.A. Lavochkin decided to design the “210 product” intended for the Tu-4 interceptor as a reduced copy of an anti-aircraft missile. During the work, elaborations on the earlier, easy version of the rocket were used. The rocket diameter was reduced to 530 mm, length - to 8,3 m. At the same time, the main features of the B-300 are a liquid propulsion system with a pressurized supply system for fuel components (triethylamine and nitric acid), an aerodynamic arrangement according to the “weft” scheme with aileron installation in one planes - have been saved. For guidance of missiles by an interceptor aircraft in the nose, it was equipped with special equipment for launching a rocket into a radar beam. 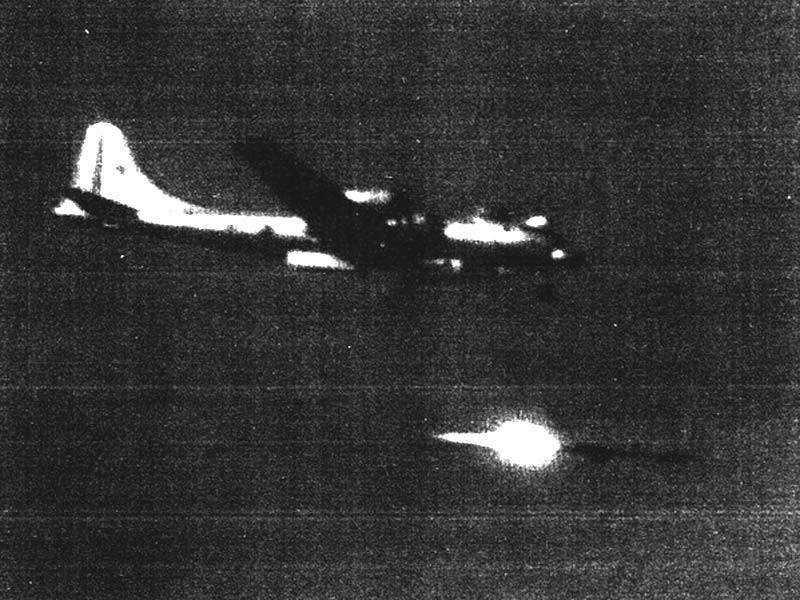 For the first version of the air-to-air missile, they took a complete set with two solid-propellant launching accelerators placed in a “packet” scheme in the horizontal plane in the middle of the rocket length. This device allowed launching missiles from ground-based launchers. At the next stages of work, the starting engines were abandoned. The modified rocket received the name "product 211".

OKB-301 in January-June 1953 of the year carried out a number of measures to eliminate the deficiencies that were identified during the tests. Carried out the replacement of the autopilot APG-301р on the APG-301, finalized the engine. At the same time, TsAGI carried out blow-ins of the М121 model of the product “211” and models of the wing Tu-4 for aerodynamic compatibility. Preparations were underway for conducting launches with a radio control system. 4-19 in August 1953 at the State Central Test Site after ground testing conducted a second batch of products in a stand-alone version (with a new AP, without a guidance system) from a Tu-4 carrier.

The launches were carried out at altitudes from 5 to 9 thousand. In the course of the launches, the ballistic characteristics, engine performance and stabilization quality were checked. Total for the year prepared and implemented 7 launches. A normal start and satisfactory stabilization in pitch and roll are shown. The principal conclusions and valuable characteristics of the capabilities of the air-to-air system were obtained. In the 3 quarter, 1954 was planned to carry out test launches using radio control equipment. Designed version of the product "211" with a radar homing system (developed under the direction of the chief designer Malachi VA, in OKB-339). However, due to the futility of the carrier, the projectile for complex tests with the radio control system D-500 was not transferred. By the order of the Ministry of Antimonopoly Policy №507ss from 14.08.53, the work was stopped.

Tactical and technical characteristics of the product "210":
The carrier aircraft - Tu-4.
Warhead - frag with a proximity fuse, weighing more than 100 kg.
The control system is a radio command one that operates according to the principle of holding an aircraft’s radar station in the equal signal area.
Management - aerodynamic steering wheels.
Start - from the aircraft carrier.
Rocket length - 8340 mm.
The maximum case diameter is 530 mm.
Wingspan - 2290 mm.
Starting weight - whiter than 1000 kg.
Destruction range - 10-15 th. M.
The maximum height of the target to be hit is 20 thousand meters.
The number of stages - 1 (2 - on the project).
Type of propulsion engine - liquid rocket engine.
Aircraft radar - D-500.

With the start of development, in accordance with the Government Decree of November 20, 1953 No. 2837-1200 of the K-15 complex based on the supersonic La-250 and air-to-air missiles "275", it was decided to continue further development of the "211" product. At the same time, work was limited by the volumes necessary to ensure the creation of a new complex. All work on the product "211" was stopped by order of the Ministry aviation industry dated August 16, 1954.

However, some time later, according to orders, “211-75” and “275-50” carried out improvements and test launches of products. The objectives of the launch were the receipt of materials on the dynamics of flight, as well as controllability of a more promising interception system from the K-15 SD.

It is now difficult to clearly assess the validity of this decision. On the one hand, the development work on the USSR early-warning radar aircraft was interrupted until the end of the decade and resumed on the Tu-126 practically from scratch. And only many years later, the idea of ​​combining the aviation radio detection and guidance and fighter complex incorporated into the G-300 system was finally implemented in the complex based on the MiG-31 with the radar Zaslon and the K-33 missiles.